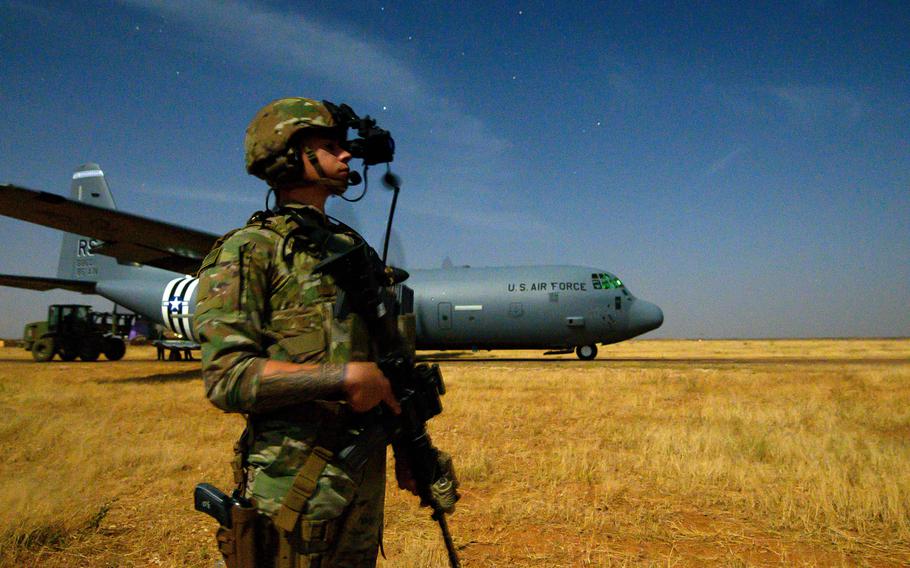 Spc. Christopher Andres of the Oregon National Guard provides security for a U.S. Air Force C-130J Super Hercules during operations in Somalia in 2020. President Joe Biden signed an order that will have hundreds of U.S. special operations troops return to Somalia reversing a decision by former President Donald Trump to pull 700 service members from the country, The New York Times reported May 16, 2022. (Christopher Ruano/U.S. Air Force)

“This decision was based on a request from Secretary [Lloyd] Austin and included advice from senior commanders and, of course, concern for the safety of our troops who have incurred additional risk by deploying in and out of Somalia on an episodic basis for the past 16 months,” Kirby told reporters at the Pentagon.

The Defense Department is now “evaluating the appropriate timing and next steps” to implement the order by President Joe Biden, he said.

Kirby did not say how many troops would be stationed in Somalia, though The New York Times reported the new mission would be capped at about 450 personnel. Kirby did say there is no time limit for how long U.S. forces will stay in the country.

“We're working now to evaluate local conditions including those following the Somali presidential election (Sunday), and we're engaging partners in the region including the Somali government to determine the best way forward,” he said.

The decision comes in the wake of criticism by the top U.S. general for Africa over the current strategy against al-Shabab, a militant group aligned with al-Qaida.

In March, Army Gen. Stephen Townsend, who leads U.S. Africa Command, told the Senate Armed Services Committee that rotating troops to Somalia on training missions amounted to “commuting to work.” The plan also “caused new challenges and risks for our troops,” he said.

“I believe my assessment is that it (the strategy) is not effective. … We are marching in place at best. We may be backsliding,” Townsend said.

U.S. forces moving into Somalia will come from units already in the region, and the mission will remain an advise-and-assist operation, Kirby said.

“Our forces are not now, nor will they be, directly engaged in combat operations,” he said. “The purpose here is to enable a more effective fight against al-Shabab by local forces [as] al Shabab has increased in their strength and poses a heightened threat.”

The order also grants the Pentagon greater authority to carry out airstrikes in Somalia against about a dozen leaders of the terrorist group, according to the Times report.

“[Austin’s] view was that that episodic engagement model was inefficient and increasingly unsustainable,” Kirby said. “Forces also lost time on target, and critical situational awareness needed to detect and disrupt an enemy attack.”

For decades, al-Shabab militants have waged a contest for control of Somalia, a country with a weak central government and a long history of disorder.

In recent years, the U.S. had stepped up its support of Somalia’s army, with expanded training missions and an airstrike campaign against militants.

But following Trump’s order to pull forces from the country and a sharp reduction in airstrikes by the Biden administration, there have been concerns that militants are gaining ground.

So far in 2022, AFRICOM has announced one airstrike against al-Shabab fighters in Somalia. That took place in February and was the first strike in the country since August 2021.

By comparison, the U.S. conducted 63 strikes against Islamic militants in Somalia in 2020.

With a force estimated at between 5,000 and 7,000 fighters, al-Shabab has more freedom of movement since airstrikes have been scaled back, defense officials have said.

The decision to switch back to a “persistent presence” in Somalia was made after examining other U.S. advise-and-assist missions in other parts of the world.

“The advise-and-assist mission, as we've seen in many places around the world, is best done when you're on site and you can develop those relationships and keep those conversations going,” Kirby said. “When you're coming and going, that contact is a little bit harder to work."