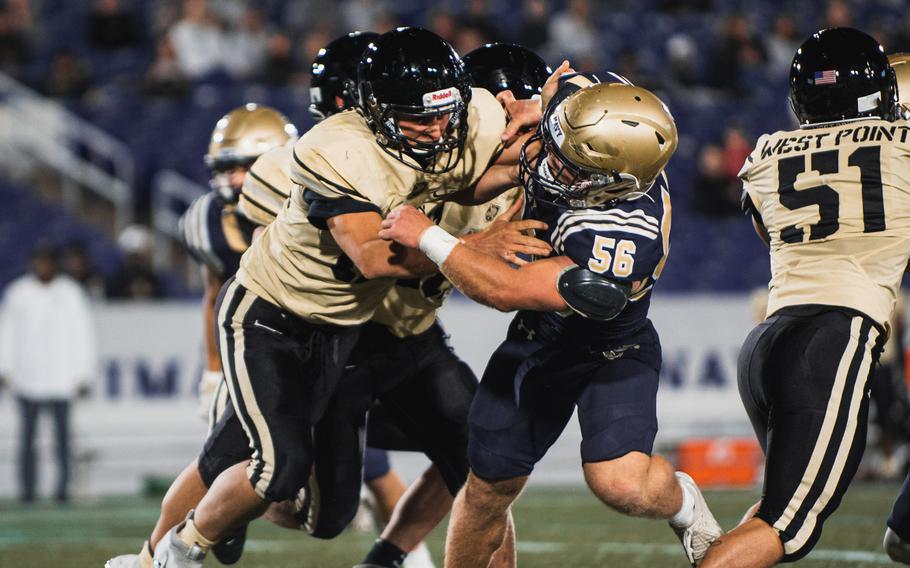 Navy is averaging 176 yards rushing a game, well below the standard set during the triple-option era. Since former head coach Paul Johnson brought the unique attack to Annapolis in 2002, the Midshipmen have routinely rushed for more than 300 yards per game. (Facebook)

(Tribune News Service) — There is hope for Navy football's beleaguered ground game. It starts with a group of young, inexperienced offensive lineman still coming together as a unit.

Navy is averaging 176 yards rushing a game, well below the standard set during the triple-option era. Since former head coach Paul Johnson brought the unique attack to Annapolis in 2002, the Midshipmen have routinely rushed for more than 300 yards per game.

When an option team's rushing offense is performing at a subpar level, the offensive line comes under scrutiny. So far this season, the Midshipmen simply have not been able to win the line of scrimmage and knock opposing defenses off the ball.

Growing pains were expected considering Navy had two first-year starters along the line. That list grew to three after left tackle Jamie Romo got injured during the Memphis game and Sam Glover moved into the lineup.

Further shuffling occurred prior to the East Carolina contest as sophomore Connor McMahon replaced junior Ahmad Bradley as the starting left guard. Glover, McMahon and center David Hixon are in their inaugural seasons as starters.

Hixon, who did not see varsity action as a plebe and missed his senior season of high school football due to injury, had not played in a game since 2019.

"They're talented young guys who are learning on the job, but they've got to grow up quickly," Navy coach Ken Niumatalolo said.

Making matters worse was that several starters were limited during August camp due to health concerns, including senior right tackle and offensive captain Kip Frankland, who was recovering from offseason surgery. Frankland was non-contact during preseason practice and showed significant rust.

"Kip's first contact since the Army game was against Delaware and he was not ready," Ingram acknowledged. "Kip is steadily playing his way into playing shape and has gotten better with each game."

Glover, McMahon and starting right guard Josh Pena also missed time during August drills, which made it difficult to build chemistry and cohesion. "I like our pieces, unfortunately, the pieces were not together a lot in camp," Niumatalolo said.

One of Navy's most talented offensive linemen has yet to play this season as junior Lirion Murtezi also underwent offseason surgery and the rehabilitation has taken longer than expected.

Ingram said it's been a slow process to get Murtezi ready to play in games, but feels the process is finally complete. He's expected to get repetitions this Saturday against Tulsa, which will bolster the overall depth.

Murtezi gives Navy a different look at the center position since he weighs 315 pounds, about 40 more than Hixon.

"I'm not pleased with what I've seen so far, but I'm optimistic because I've seen progress. If you went from the Delaware game and moved forward, there has definitely been improvement," said Ingram, who coaches the offensive line along with Danny O'Rourke.

"Those young guys who were not very experienced are getting better and better with every game. I believe we have a chance to be really good up front before all is said and done."

Pena, who started nine games a year ago before suffering a season-ending injury, has probably been the most consistent offensive lineman. Ingram, who coaches the centers and guards, said Pena has graded out well.

McMahon, who was recruited as an offensive tackle and started this season at that position, has shown tremendous progress since shifting to left guard. Although undersized, McMahon (6-3, 262) possesses the athletic ability to pull and reach the second level.

"McMahon has been impressive for a young guy. He has an opportunity to be a special player," Ingram said.

McMahon played tight end for most of his time at Canon McMillan High in Pennsylvania. He switched to tackle as a senior and played well enough to earn All-State honors and receive offers from both Navy and Air Force.

McMahon was asked this week if he could have imagined starting for Navy against Air Force at an interior position along the offensive line.

"I probably wouldn't believe it because I was 220 pounds as a junior," he said. "Never in a million years would I have thought I would be playing offensive tackle as a sophomore here."

Ingram tapped McMahon, a tight end most of his high school career, on the shoulder following the Delaware game and let him know about the switch to guard. Pena has helped the youngster learn the position in terms of techniques and blocking assignments.

"Speed and physicality are what the coaches are looking for at that position. I guess they liked what they saw out of me in practice. They liked how fast I was moving and getting those zero technique nose guards cut off," McMahon said.

The Midshipmen have struggled mightily in short-yardage situations this season. Navy had first-and-goal from the 5-yard line on its first possession at East Carolina and could not punch the ball into the end zone on four plays.

There have been numerous times this season when Navy faced third or fourth and short and could not convert. McMahon said the offensive line takes those failures personally. Film study is showing too many missed assignments or poorly executed blocks.

"We keep making little, tiny mistakes that can be the difference between converting a first down or having to punt," McMahon said. "We need to really focus and limit the amount of mistakes we're making in games."

Navy led the nation and set a single-season school record with a rushing average of 360.5 yards in 2019. That was the season in which the Midshipmen had the same five starters along the offensive line for every game.

Navy currently ranks 50th nationally in rushing offense, while service academy rivals Air Force and Army are first and second, respectively. The Falcons are averaging 369.9 yards per game on the ground, while the Black Knights are grinding out an average of 298.8 rushing yards.

"I think it all starts with the offensive line. When we're moving the bodies and creating holes, there is room to run," McMahon said. "If the ball is not moving, it's probably our fault. We have to be perfect because we have a very small margin of error."

McMahon sees the chemistry steadily developing and believes all the offensive linemen are playing faster and more physically.

"We have a young offensive line and haven't worked together much until the last four weeks," McMahon said. "I think we're getting used to each other more and more every game."