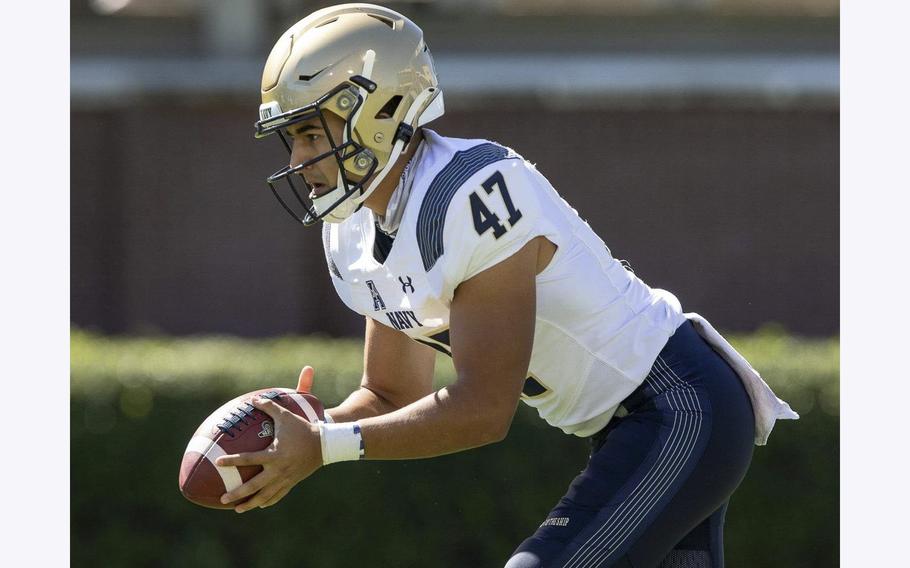 Every day, Daniel Davies wears a blue wristband that his parents made. It reads "Family," "#WWRD" and "RD 1993-2016." The wristband is a constant reminder of Davies's oldest brother who died after a car accident. "What Would Ricky Do?" is the meaning behind the hashtag.

"He's with me all the time," the Navy kicker said.

Daniel fully believes Ricky was with him last week when Daniel made his debut as the team's place-kicker and went 3-for-3 on field goals, including a 29-yarder in double overtime to give the Midshipmen a 23-20 victory over East Carolina for their first win of the season. On the way to the game, Davies was listening to Spotify on shuffle when the song "Closer" by the Chainsmokers came on. The song was released in 2016 and their father, Michael, said the song reminded him of Ricky. Every time the song plays, Daniel thinks of his oldest brother. The song came on as the team was riding the bus to face the Pirates at Dowdy-Ficklen Stadium. The same song randomly came on again as the team was walking from the bus to the plane after the game.

Ricky Davies died six years ago of injuries suffered after being struck by a bread delivery van while walking. He was a soccer player at the Coast Guard Academy and is the reason Daniel is at Navy in the first place. The Davies are a soccer family, with Ricky being the eldest and middle brother Eric playing collegiately at Saint Louis University. The brothers weren't even allowed to play football until seventh grade, and Daniel played soccer until dedicating himself to football after his freshman year of high school. The family has no real ties to the military, but Ricky wanted to continue playing after high school and the Coast Guard offered the opportunity. Daniel remembers Ricky constantly calling home to complain about all the responsibilities that came with being at the academy, but he still graduated in 2016 and was an ensign with the Coast Guard. Daniel, who didn't know much about the service academies, thought the Coast Guard Academy campus was "the coolest thing." So when Navy reached out, he already an understanding.

Davies had to wait until his senior year to get his first chance to kick field goals in a game as fellow kicker Bijan Nichols was also part of that freshman class. Nichols has been the No. 1 kicker since his freshman year, is second on Navy's career field goal list, was named second team all-conference in 2021 and was voted a captain in 2022. A leg injury, however, has kept Nichols sidelined this season. Evan Warren replaced Nichols in the first two games before Davies, who has served as the holder and held the punting responsibilities in 2020, got the nod last week. He was named American Athletic Conference special teams player of the week after the performance at East Carolina.

The opportunity was slow to arrive, but Daniel always thought of Ricky's experience.

"He was my greatest role model," Daniel said. "I've never once thought that I was going to leave just because Ricky did it. So it's kind of one of those things, 'Oh, my brother did it, I'm going to do it as well.' And it hasn't been easy. I've definitely had my ups and downs here, but I've never once called home like, 'Hey, I'm thinking about leaving,' when Ricky did all the time. Which is kind of funny."

Eric Davies added, "The coolest thing, is like, Daniel's living in the shoes Ricky did."

In 2020, Daniel got special permission to honor Ricky by wearing a Coast Guard patch as part of the special uniforms the team wears for Army-Navy games.

Eric and Daniel text daily, but Daniel called after the bye week with some news - he'd be the starting kicker against East Carolina. He added a request not to tell their parents. The family is used to seeing Daniel punting, but seeing him on TV kicking field goals in overtime just hit different. The realization that Daniel had just kicked field goals for Navy for the first time didn't come until after the game for Eric, despite the phone call.

"It's like, dude you better not miss this," Eric said with a laugh. "That boundary between brother, I'm invested in this game - that started to get blended. I was nervous just like any fan. It was wild to me, taking a step back. I'm like, dude, that's my little brother. I couldn't be more proud.

"Obviously sometimes it sucked. It's frustrating as an athlete who's competitive to not be playing."

That playing time isn't guaranteed moving forward as Nichols is considered day-to-day, and Coach Ken Niumatalolo said the job will be his when fully healthy. The Midshipmen will face Air Force on the road Saturday in the first game of the Commander-in-Chief's Trophy series between Navy, Air Force and Army. The Falcons boast the No. 1 rushing offense in the nation at 412.2 yards per game - over 100 yards more than No. 2 Minnesota (294.5 ypg).

There are few secrets between the rivals, but Air Force (3-1) does bring a bit of a different type of option than Navy runs.

"Of all the option teams I've gone against, they're the most creative," Navy defensive coordinator Brian Newberry said. "From the type of plays they run to the formations that they give you. They don't run a ton of different plays, but they run them out of a lot of different sets and a lot of different looks. They do a good job with motions. Eye candy to distract you. And they're really good at what they do."

Davies was the hero last week as Navy was in danger of falling to an 0-3 start to the season. He became a bit of a celebrity on campus this week and said one professor didn't even previously know that he was on the football team. The 29-yarder put the Mids up 23-20 in double overtime, preceding East Carolina kicker Owen Daffer missing a 37-yard attempt. The victory, particularly on the road, was much needed for both the standings and confidence.

And it came off the foot of a player who has waited four years for his first opportunity.

"It just embodies who we are," Niumatalolo said. "Just resilient, tough, young man. He's been all in. He's never complained about not kicking or punting or doing the kickoff duties. He's always come to work every day. He's bought into the Brotherhood.

"You couldn't be more happy for a kid like that because he's what we embody as a program - selfless, all about the team and happy that he was able to go out and contribute in that way. Just happy for him."