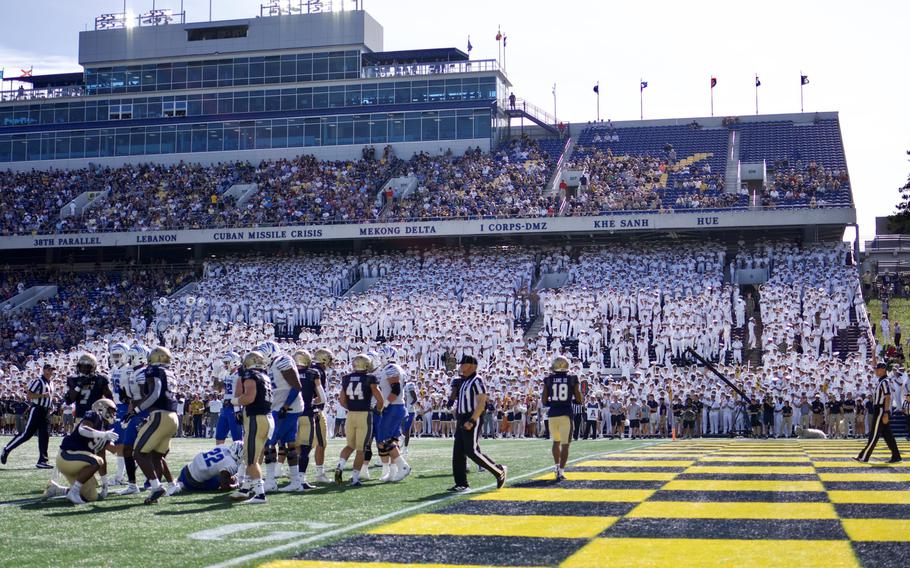 Navy football head coach Ken Niumatalolo and defensive coordinator Brian Newberry both spoke to the media this week and said the staff would spend the off week “self-scouting” to determine what needs to be fixed after starting the season with two ugly losses. (Navy Athletics/Facebook)

Head coach Ken Niumatalolo and defensive coordinator Brian Newberry both spoke to the media this week and said it was way too early to hit the panic button. They said the staff would spend the off week "self-scouting" to determine what needs to be fixed.

"You're always looking at yourselves to find ways to change and improve. You look at stuff schematically and personnel-wise," Niumatalolo said. "You also look at how you're coaching. It all starts with me and how I get our team ready."

Niumatalolo said the staff would address the negatives and "build off the positives." Navy returns to action Sept. 24 at East Carolina, the first road game of the season. One week later Navy faces service academy rival Air Force in Colorado Springs.

"We still have such a long way to go. There's still a lot of the season left to play," Niumatalolo said.

While the statistics might not necessarily show it, Niumatalolo felt the offense performed better in Saturday's 37-13 loss to Memphis than it did during the season-opening 14-7 defeat against Delaware.

The Midshipmen amassed 314 total yards against the Tigers as opposed to 319 versus the Blue Hens. However, there were more sustained drives and the blocking was better, Niumatalolo said.

Navy's triple-option attack relies heavily on the fullback dive and quarterback keeper — two elements that have been missing in action so far this season. Starting quarterback Tai Lavatai is averaging 2 yards per carry, while fullbacks Anton Hall Jr., Logan Point and Daba Fofana are collectively averaging just over 3 yards per carry.

"Our offensive line needs to block better and I need to call better plays. Our fullbacks need to hit it harder and Tai needs to be more decisive on some stuff," Niumatalolo said.

Meanwhile, the defense took a big step backwards during the loss to Memphis, which amassed 506 total yards. Newberry, whose unit held Delaware to just 202 total yards, said the primary talking point all week was to limit the big plays and Navy was unable to do that.

"I thought the effort was really good, but the execution was really poor," he said. "Going into every game, we want to stop the run and control the pass, which means keeping everything in front of us and making people earn what they get.

"We were very effective against the run, but we weren't able to control the pass."

Navy gave up six explosive plays (25 yards or more) and five were the result of pass completions. Memphis quarterback Seth Hennigan completed 24 of 34 passes for 415 yards and two touchdowns.

"Obviously, that's unacceptable. I need to do a better job of making sure I'm putting guys in position to be successful and making sure they can do what we're asking," Newberry said.

Hennigan threw a 50-yard bomb to wide receiver Eddie Lewis to set up the first Memphis touchdown then connected with wide receiver Joseph Scates for a 79-yard scoring strike on the opening possession of the second half.

On both plays, Navy had a defensive call in which a safety was supposed to be deep and did not drop back far enough. On the 79-yard catch and run, there was confusion among defensive backs about assignments.

"I think we probably did a poor job of preparing our guys for the speed of Memphis. I think it was a little bit of a shock to our guys. We weren't deep enough in the zone on either play, so the ball got thrown over our heads," Newberry said.

Navy is starting a pair of sophomore cornerbacks in Elias Larry and Mbiti Williams and Newberry acknowledged there will be growing pains. Safety Eavan Gibbons, a junior who started seven games last season, also bore some responsibility.

"We need to get better on the back end. We're young, especially at corner," Newberry said. "Those guys are good enough to keep things in front of them. We just need to do a better job of coaching them."

All the chunk yardage passing plays took away from a strong performance by the front seven, which limited Memphis to just 91 rushing yards. Defensive captain John Marshall had a huge game with a career-high 15 tackles, while fellow outside linebacker Nicholas Straw also held up well against the ground game with eight tackles.

"I think in general we're fitting the run really well," Newberry said. "We've been really disruptive in the early downs. We've had a lot of tackles for loss and zero gains, so we've gotten teams into the situations we want."

Newberry said the bye week will be spent focusing on the fundamentals and correcting the pass defense mistakes that were made. Another major focus will be third down defense as the Mids had trouble getting off the field against the Tigers.

"It's back to the drawing board, but I still believe in this unit. I think we have a chance to be really good and we're not that far away," he said.