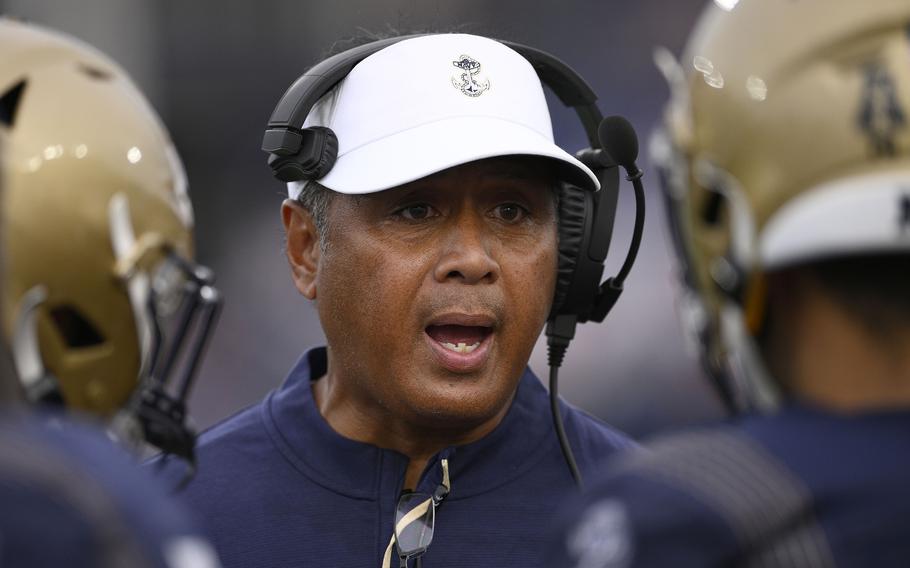 Navy head coach Ken Niumatalolo talks to his players during the second half of an NCAA college football game against Memphis, Saturday, Sept. 10, 2022, in Annapolis, Md. Memphis won 37-13. (Nick Wass/AP)

ANNAPOLIS, Md. — Seth Henigan threw for 415 yards and two touchdowns and Memphis led all the way in a 37-13 win over Navy on Saturday in an American Athletic Conference opener.

Henigan completed passes to eight different receivers, and half his 24 completions went to Javon Ivory and Gabriel Rogers. Ivory had seven catches for 89 yards and Rogers caught five for 95.

The highlight play, however, occurred when Henigan threw a 79-yard touchdown to Joseph Scates who got behind the defense, caught it in stride and raced untouched into the end zone. It was Scates' only reception of the day. The play gave the Tigers a 20-7 lead with 11:56 left in the third quarter.

Memphis built a 10-0 lead in the first before Navy quarterback Tai Lavatai threw a 62-yard scoring pass to Anton Hall Jr. Lavatai later ran it in from the 1 capping a 21-play, 74-yard drive that lasted 11:23 spanning the third and fourth quarters to reduce Navy's deficit to 23-13.

Lavatai threw for 99 yards and Maquel Haywood had eight carries for 54 yards for the Midshipmen (0-2, 0-1).