Navy fumbles away opener in loss to FCS Delaware 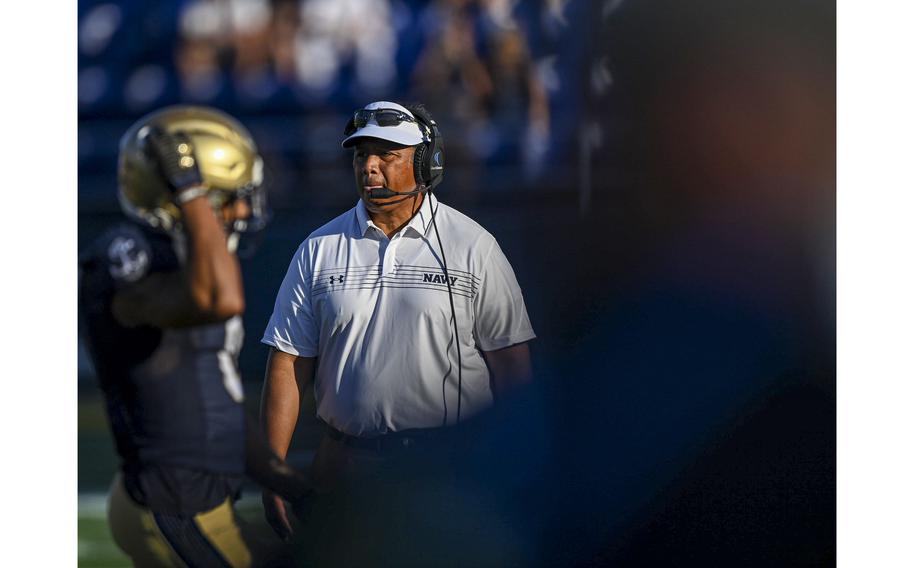 Navy quarterback Tai Lavatai gathered the snap on the first play of the season from scrimmage and attempted to place the football in the belly of fullback Anton Hall Jr., anticipating a clean exchange in the Midshipmen's opener against Delaware on Saturday afternoon.

Except the execution was anything but flawless. Neither player was able to control the ball at the mesh point, and it wound up on the turf at Navy-Marine Corps Memorial Stadium, where the upset-minded Blue Hens recovered at the Navy 21.

One play later, following a defensive pass interference penalty, the Midshipmen yielded a touchdown and never recovered, reeling amid a stalled, turnover-prone triple option that devolved into a one-dimensional rushing attack in a 14-7 loss that left Coach Ken Niumatalolo searching for an explanation.

"That can't happen," the winningest coach in program history said. "We start the day off every day, ball security, then we go straight into our mesh stuff. I mean stuff we've done for 30 years and been the same process, mesh, perimeter, so those are things our guys can do in their sleep. To have that is just unconscionable."

The Midshipmen lost three fumbles, all within the first 18 minutes, and turned the ball over three times on downs in their first loss to a Football Championship Subdivision opponent since 2007, also against Delaware. They amassed just 184 yards rushing and averaged 2.9 yards per carry.

"We just didn't have the right attitude today about moving guys off the ball," said Navy starting right tackle Kip Frankland, one of three team captains. "You practice every day, but you just have to come out in the game and do it. The coaches do a great job of preparing us for the game, and then we didn't execute on offense."

Lavatai, a junior, finished with 34 yards on 18 carries and completed 5 of 13 passes for 135 yards. The underwhelming performance came after Niumatalolo had praised the second-year starter for his development at the end of last season and during the most recent fall camp.

His long run was for 14 yards, and Lavatai was indecisive at times on pitches, including once delivering the ball behind the intended slot back on a play around the right side. Lavatai's hesitancy to draw defenders to him before pitching at the last possible moment compelled Navy to run primarily dives in the second half.

The shift in strategy worked during the Midshipmen's lone scoring drive late in the third quarter. Reserve fullback Daba Fofana, replacing Hall for good in the second half, had 28 yards on five carries, and Lavatai capped the 56-yard march with a two-yard leap to break the goal-line plane to trim the deficit to 14-7.

The Midshipmen thereafter went three plays and punt, managed two yards on fourth and three and punted on fourth and eight. During their final possession Lavatai threw incomplete on fourth and four from the Delaware 9, with the pass intended for slot back Maquel Haywood in the back of the end zone.

"When you can't get your triple and some of that stuff going, if you're worried about the mesh, then you're going to elements where it's not always you," Niumatalolo said. "I mean we had to get out of character."

The defense, despite remaining on the field for lengthy stretches and being handed short fields, rose up for 12 tackles for loss, the most for Navy since it also recorded a dozen Oct. 22, 2005, against Rice. The Midshipmen added five sacks for their most since 2019.

One of the few defensive breakdowns came when free safety Rayuan Lane III allowed Blue Hens wide receiver Chandler Harvin to get behind him on first and 10 from the Delaware 49. Quarterback Nolan Henderson delivered a strike, and Harvin scored the decisive touchdown for a 14-0 lead with 4:30 to play in the third quarter.

The Midshipmen weren't helped earlier in the series when officials assessed linebacker Colin Ramos with roughing the passer on second down and nine. Ramos nonetheless finished with a career-high nine tackles, including six in the first half.

Midway through the second quarter Ramos, a starting sophomore on the weak side, dropped Henderson for a four-yard loss on fourth and goal from the 2 to keep the score 7-0.

"I'm never going to hang my head and complain about having to go on the field," said senior striker John Marshall, who played high school football at Gonzaga. "I play defense. I like playing defense. If there's an opportunity for me to go on the field and play defense I'm going to be excited about that, definitely no fingers to point. Defense made a couple crucial mistakes."