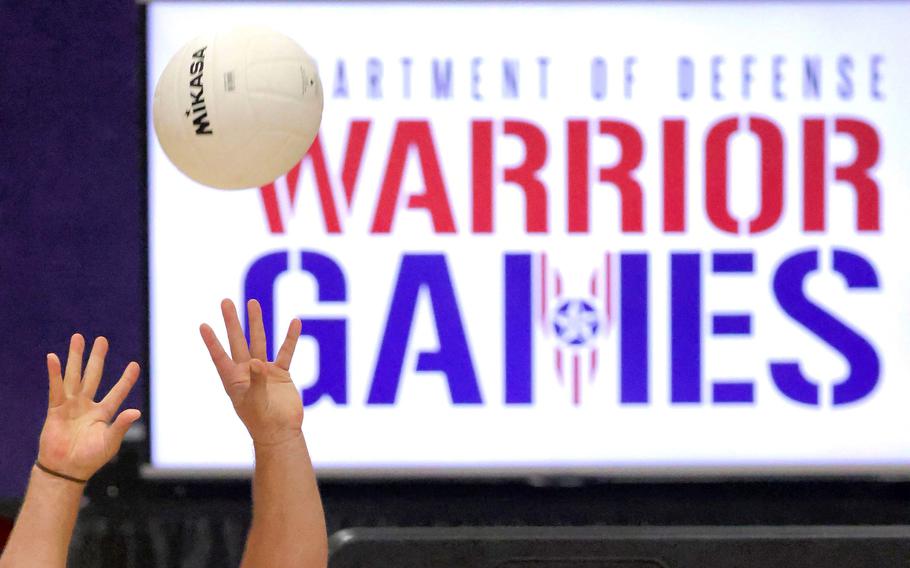 (Tribune News Service) — The resilience and determination of America’s wounded warriors will be on full display this month as injured service members compete against their peers in Orlando.

After suffering horrific accidents while serving their country, injured service members find that the athletic competition and camaraderie found at this event give them a renewed sense of purpose and drive.

“The camaraderie among each branch is unbelievable at these games,” said Andrew Blackburn, a Marine Corps veteran who will compete. “You’ve been through the struggles they’re going through, and you may not have served with them, but you love them like a brother or a sister.”

South Carolina native Brian “Big Country” Conwell regarded the Army as his “dream job” and found kinship among his fellow service members while stationed in Germany and serving in Iraq.

He came to be known as “Big Country” thanks to his thick, southern drawl and his giant stature, which includes arms 20 inches in diameter.

A few years after the sergeant returned to the United States, he was driving on base at Fort Riley in Kansas and suffered an accident that would change his life.

“On Jan. 7, 2014, I was going to get my guys lunch. I hit black ice, the vehicle ran off a ravine and broke both of my legs,” Conwell said. “I had doctors telling me that I wouldn’t ever walk again. My right leg, from the kneecap down to the ankle, has 30 screws and a 10-inch rod. I can’t feel my right foot or use my toes to balance. My left leg was amputated above the knee.”

The Army veteran battled depression as he found himself unable to do many day-to-day tasks such as cooking and getting groceries. Using his kids as a motivating force, Conwell dug his way out of that dark place.

“Oct. 1, 2020, is when I first started taking steps on my own again. I surprised my son on his 20th birthday by walking around the corner. He dropped to his knees and started crying,” he said. “My family is my main strength. I’m trying to teach them that it doesn’t matter what life puts in front of them. If you work hard enough and push through your pain, you can achieve your goals and your dreams.”

After learning to walk again, Conwell began putting in long hours at the gym. His “gruesome” training schedule involves a daily 3 a.m. wake-up call, but the effort is paying off. At recent competitions in Arizona, Conwell achieved medals in discus and shot put.

He’ll compete in both of those events at the Warrior Games, plus several others.

“I’m also the center for the Army basketball team and just found out they stuck me on the wheelchair rugby team,” Conwell said. “Apparently, I’m the biggest guy on Team Army, so they just want me crashing into people.”

While Conwell looks forward to the fellowship of other athletes with similar stories in Orlando, he also has his sights set on an ambition much bigger.

“The ultimate goal is to reach the 2024 Paralympics,” he said. 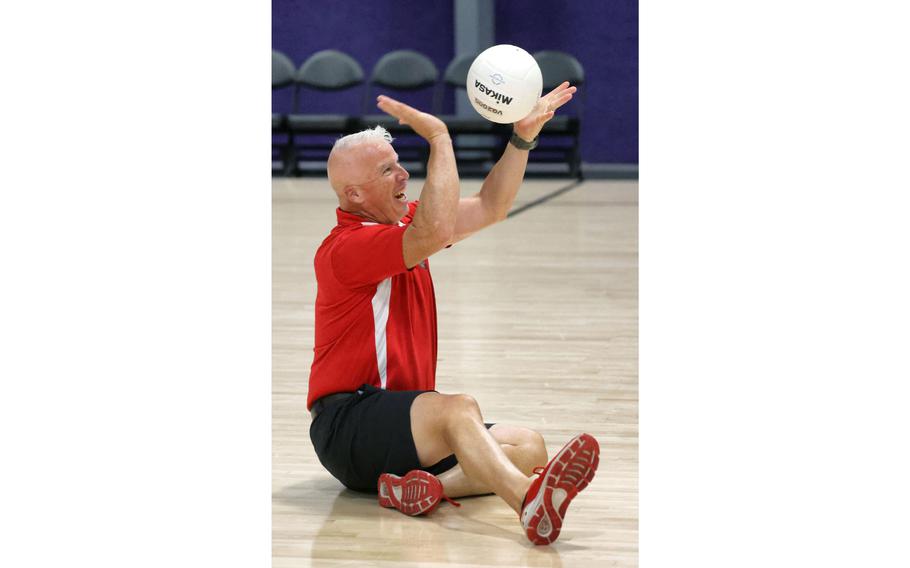 U.S. Marine Corps Sgt. Andrew Blackburn serves the ball during a demonstration of sitting volleyball at a preview event for the 2022 Department of Defense Warrior Games, at ESPN Wide World of Sports at Walt Disney World. (Joe Burbank, Orlando Sentinel/TNS)

Andrew Blackburn, who moved from Michigan to Palm Bay last year, enlisted in the Marine Corps, not fresh out of high school, but after he was settled and had a family.

“I signed up because of 9/11 at age 31 with a wife and two kids, joined the Marines,” he said. “On my second deployment, I was in Fallujah finishing up a foot patrol, leading my squad, and a sniper shot me.”

The sergeant, in excruciating pain, was quickly loaded into a Humvee, but all he could think about was his wife and kids. It took him more than a year to learn how to walk again, but Blackburn has come a long way in his recovery journey since that day.

“I had some metal rods put in my leg. It took about four years of ups and downs and hurdles and challenges to finally get a complete hip replacement,” he said. “Today, I have a much higher quality of life. I’m back to having physical abilities that are very close to what most average people have.”

“Military adaptive sports have opened up a huge area of things that I never thought possible,” he said. “There is so much pride in taking the gold medal in your event, but there is probably just as much, if not more, in helping somebody up if they fall or just being there supporting.”

Army Ranger Sgt. 1st Class Cory Remsburg was on his 10th combat rotation, serving in Afghanistan in 2009, when his squad hit an improvised explosive device planted in the road.

“His injuries included shrapnel penetrating the brain and blindness in his right eye. His left side became paralyzed,” said Craig Remsburg, his father and caretaker. “When I got the phone call, his company commander said a sentence that stuck with us as a family and our support group: ‘He’s alive.’ We used that as our rallying post.”

Cory spent months in a coma and finally said his first word eight months after his injury.

“As a family, we were inspired that he wasn’t giving up,” Craig said. “Even now, he refuses to be defined by his injury. That’s not who he is.”

During his service and recovery, Cory built a relationship with then-President Barack Obama, who visited the wounded veteran multiple times as he regained his voice and the ability to walk. The injured warrior even made an appearance at the president’s 2014 State of the Union speech next to first lady Michelle Obama.

“When I think back on my service as president, getting to know you is one of the most important things I’ve done,” the president said to Cory during a 2016 visit to the Oval Office.

On his long road to recovery, Cory has found that adaptive sports have given him a purpose and a sense of community.

“I’m trying to prove to myself that I have that drive still,” Cory said. “I’ve met a lot of friends who are fellow service members who are injured themselves.”

“I try to give back when I’m not competing. I support the other athletes by cheering them on,” Cory said. “At the end of the day, I can talk to [my dad], but I don’t think he will truly understand. But the fellow injured service members will.”

The 2022 Warrior Games will take place at ESPN Wide World of Sports Complex at Walt Disney World Resort from Aug. 19-28; the event is free and open to the public. To learn more and see a schedule of events, visit dodwarriorgames.com.