What comes first, baby or Olympics? Race is on for biathlete and National Guardsman Leif Nordgren. 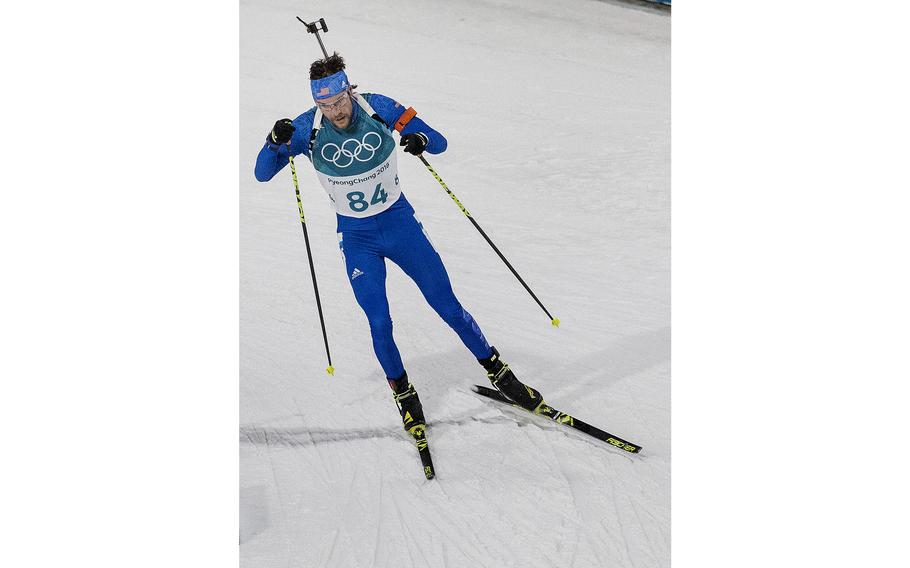 (Tribune News Service) — No matter how many big events you've packed into your 2022 calendar, Vermont National Guardsman Leif Nordgren probably has you beat. Competing at the Beijing Winter Games is just the start for the Minnesotan, a three-time Olympian in biathlon.

"It's going to be busy,'' Nordgren said. "After the Olympics, I'll finish the World Cup season, and that will be the end of my career. My wife and I are expecting our first kid in early February. Then the plan is to go to flight school, and I hope to become a helicopter pilot.''

Wait, what was that second part again?

According to his wife, Caitlin Nordgren, the exact date is actually Feb. 4. Not that one day makes any difference.

The couple lives in Vermont now and that is where Caitlin will give birth, likely sometime this week while her husband is in China to compete in his final Olympics. Their baby could make a grand entrance during Friday's opening ceremony — cue the fireworks — or perhaps on Saturday, when the biathlon schedule begins with the 4x6-kilometer mixed relay in the mountains north of Beijing.

Not the most convenient, to be sure. But some things simply happen on their own schedule, and the Nordgrens aren't losing sleep over their unfortunate timing.

"As soon as I found out I was pregnant in June, we did the math right away,'' Caitlin Nordgren said. "We knew it was going to be right around the Olympics, but after we looked up the date of the opening ceremony, I was like, 'Oh, my gosh.' We just had to laugh.

"We knew right away we didn't want (Leif) to miss the Olympics. It's a little bit of a bummer, but exciting at the same time. We're trying to make the most of it.''

These Winter Games will close a long athletic career for Leif Nordgren, 32, who grew up in Marine on St. Croix, Minn. In 2014, he was the youngest man on the U.S. Olympic team for biathlon, which combines cross-country skiing and rifle shooting. He is now the oldest.

Nordgren joined the Vermont National Guard in 2019 to train with its high-performance biathlon program and prepare for his next chapter. The Guard has been holding a pilot slot open for him, putting Nordgren in position to follow his father, Carl, and several other family members who have flown for the U.S. military.

He's thankful the Guard let him set his own timetable, so he could pursue one more Olympic berth. Nordgren is equally grateful to have a wife who never flinched when parenthood didn't follow such a neatly arranged schedule.

"We talked about it a lot, but at the end of the day, it wasn't really a discussion,'' Nordgren said. "She knew it was my last season, and she was OK with having the baby without me there. I'm really lucky she's so supportive of my biathlon career.''

Nordgren was introduced to biathlon when he was 14, following his sister, Sonne, into the sport. He has competed in nine world championships, with multiple top-10 finishes. His best Olympic finish came four years ago, when he was part of a team that placed sixth in the men's relay at the Pyeongchang Games — tying the highest U.S. finish ever in that event.

An aviation operations specialist, he is among three biathletes from the Vermont National Guard to make the Olympic team. Nordgren also is one of three men with Minnesota ties who will compete, joining Jake Brown of St. Paul and former St. Scholastica athlete Paul Schommer.

In 2017, Nordgren married Caitlin Napoleoni, a meteorologist for the NBC-TV affiliate in Burlington, Vt. He spends six months a year training and competing away from home, mostly in Europe. That became a lot harder after he and Caitlin learned of her pregnancy.

Leif's mom, Sue, said she cringed when she first heard the due date.

"It's awful timing,'' she said. "But there are certain uncontrollables in life. You take what you can get, and they both have great attitudes about it.''

The couple was last together in early November, when they attended a baby shower just before Leif started the World Cup season in Europe. An expected trip home for Christmas was canceled because he had not yet qualified for the Olympics. Once Leif made the team, he and his family began figuring out a plan.

Caitlin's mom, Luann Napoleoni, will be in the delivery room with her. Sue Nordgren will travel to Vermont from her home near Grand Rapids once the baby is born. Caitlin's sisters already have visited to help with things such as fixing up the nursery.

As the baby watch enters its final days, Leif is a little anxious about the quality of Wi-Fi in Zhangjiakou, the remote area where the National Biathlon Centre is located. Caitlin is a little nervous about getting a hold of him from 13 time zones away.

"I told him to keep his phone on all the time,'' she said. "I'm going to call him when I'm going into labor, and hopefully, he will hear it. But there's no predicting where he'll be. He might be competing.''

Following the Olympics, Leif will return to Vermont for a brief visit with his wife and new baby. He will head back to Europe to finish out the World Cup season, then come home to a new life.

"With biathlon, Caitlin and I have spent so much time apart,'' he said. "I'm kind of looking forward to hanging up the skis and spending a lot more time at home with her and our baby, just seeing where life takes us.''

Even if that isn't happening on the schedule they expected, Caitlin found a reason to be excited about the timing.

"If the baby comes when it's supposed to, I'll be in the hospital, hopefully watching my husband compete, with a little baby in my arms,'' she said. "I'll be able to say, 'Hey, you got to see your dad in the Olympics.' That's pretty cool.''