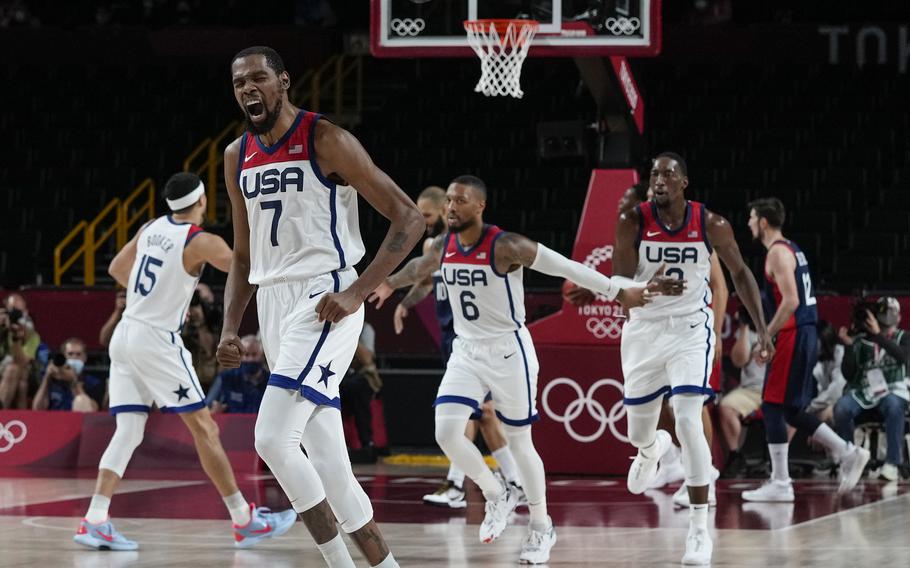 SAITAMA, Japan — There was no signature, jaw-dropping highlight like Vince Carter’s “Dunk of death.” There were no legendary stories like Charles Barkley roaming through Barcelona’s streets like a pied piper. There wasn’t the typical “Dream Team” hype — Team USA’s men’s basketball team was occasionally overshadowed in Tokyo by Slovenian sensation Luka Doncic and even CUE5, Japan’s basketball-shooting robot.

But there was, in these pandemic Olympics marked by mostly empty stadiums and strict health protocols, a fourth straight gold medal for Team USA, which held off France, 87-82, in the final at Saitama Super Arena on Saturday. This was a controlled, workmanlike triumph for the Americans, who gathered last month as a disorganized group, handled their business in relative silence and evolved into worthy champions who displayed impressive resolve against international opponents such as Spain, Australia and France who boasted more shared experience.

The golden streak would have ended if not for Kevin Durant, who capped a sensational Olympics with 29 points on 9-for-18 shooting. While Durant — who joined Carmelo Anthony as the only American men’s players to win three Olympic gold medals — left his defenders flummoxed with fall-away jumpers and hard drives to the hoop, Team USA claimed its revenge for losses in the 2019 FIBA World Cup and the Tokyo opener through a collective effort on both sides.

France refused to go away in the gold medal game, leaning heavily on 7-foot-1 center Rudy Gobert, who exploited Team USA’s lack of size with 16 points and eight rebounds. But the French were ultimately undone by 18 turnovers and some poor decision-making down the stretch.

Durant was aided by Jayson Tatum, who came off the bench to score 19 points, including a big three-pointer that gave Team USA some breathing room late in a tight fourth quarter. Starting guards Damian Lillard and Jrue Holiday added 11 points apiece in the win.