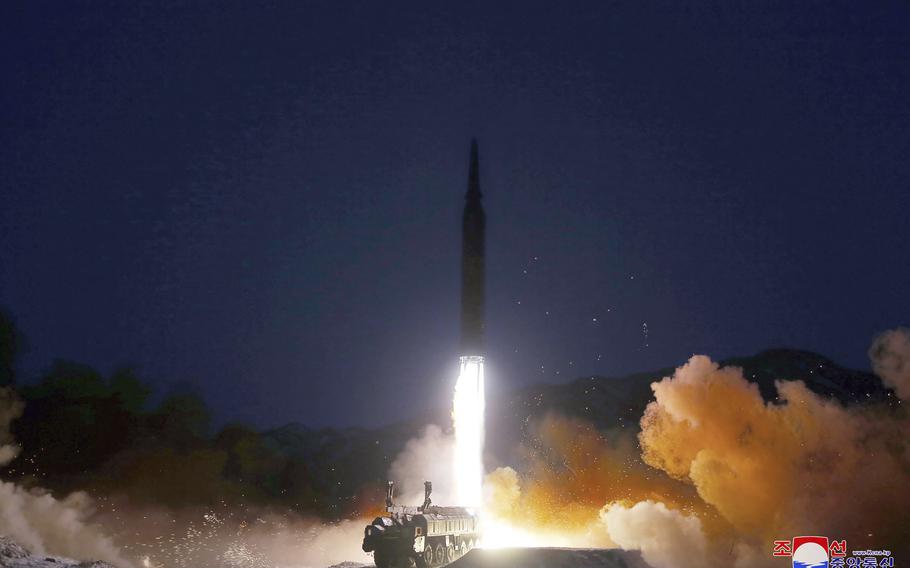 This photo provided by the North Korean government shows what it says a test launch of a hypersonic missile on Jan. 11, 2022 in North Korea. (Korean Central News Agency/Korea News Service)

North Korea is once again rattling the cage. Over several weeks, the regime has carried out four ballistic missile tests, the most recent on Jan. 17. Pyongyang describes them as essential for self-defense.

Meanwhile, South Korea continues on a positive course of exceptional economic growth and profitability, combined with now firmly established representative democracy. Scare stories about actions of the North overshadow the good news regarding the South. This is most unfortunate.

North Korea has possessed at least rudimentary nuclear weapons since 2006. From time to time, Pyongyang threatens to use them against South Korea, Japan and even the United States, though long distance makes that last target still impractical.

Last September, Pyongyang announced the successful launch of a cruise missile, an insidious weapon, flying low and difficult to detect with radar. An early version, the V-1 rocket of Nazi Germany, killed many in Britain in World War II.

Meanwhile, the Biden administration reevaluates Korea policies. A natural assumption is that North Korea leader Kim Jong Un is returning to rigid hostility, after some flexibility during the Trump administration. Despite highly publicized meetings between Trump and Kim, there were no diplomatic or other breakthroughs.

In reality, North Korea is literally a disaster area in economic and human terms. The population has endured decades of desperate hardship, including famine. United Nations sanctions effectively isolate the extreme and dangerous government.

By contrast, South Korea moves from strength to strength. The close alliance with the United States dates from the Korean War of 1950 to 1953. President Harry Truman’s courageous decision to lead the U.N. effort to defend South Korea after invasion from North Korea stands as a decisive moment in the history of both countries, and of the world.

Considerable credit goes to President Moon Jae-in, completing his five-year term and ineligible for a second.

Behind the scenes, Moon has worked diligently to try to improve long-hostile relations with North Korea, and assert effective leadership more widely in Asia. Moon and Kim met in May 2018, following earlier summits in 2000 and 2007.

At the end of 2018, the influential Asia News Network named Moon “Person of the Year.” South Korea’s chief executive rightly received praise for mediation between the U.S. and North Korea, important in bringing the two national leaders together. This accomplishment is too easily oversimplified and minimized.

Moon insisted on meeting with the North Korea delegation to the 2018 Winter Olympics, held in Pyeongchang, South Korea. The group included Kim’s sister, an influential figure in the bizarre regime.

Moon personifies in important ways the positive effective qualities of his nation. He assumed office as national chief executive on May 10, 2017, following a special election. From the very start, he emphasized relations with North Korea.

Moon became president in a time of tension and uncertainty on both sides of the 38th parallel, the border that divides Korea into north and south. South Korea had just experienced the ordeal of impeachment and removal from office of a sitting president, Park Geun-hye. North Korea greeted the inauguration of a new president in South Korea by launching a new long-range missile, the Hwasong-12, four days later.

Earlier, South Korea’s dictatorship imprisoned Moon for his youthful reform activism. Later, he became a human rights lawyer. He also served in the Republic of Korea Army Special Forces, and saw action in the DMZ (Demilitarized Zone) along the 38th parallel.

After a period of low popularity measured by public opinion polls, Moon’s standing has risen dramatically over the past year. In March, the voters elect a new president. Moon will leave office enjoying the great respect he deserves.

South Korea should lead initiatives toward North Korea, supported by the United States. Together, our position is strong.