Joey and Paula Reed pose for a photo with a portrait of their son Marine veteran and Russian prisoner Trevor Reed at their home in Fort Worth, Texas, Tuesday, Feb. 15, 2022. Russia is holding Trevor Reed, who was sentenced to nine years on charges he assaulted a police officer. (LM Otero/AP)

As news of WNBA star Brittney Griner being detained in Russia spread this week amid the invasion of Ukraine, her story has shed light on other Americans jailed in Russia. Among them is Marine Corps veteran Trevor Reed, whose detainment started with a drunken night of vodka that he says he does not remember - one that resulted in a nine-year prison sentence.

Reed, who traveled from North Texas to Moscow to visit his girlfriend in the summer of 2019, was jailed after a night of drinking that ended with him allegedly attacking two police officers. Reed pleaded not guilty to a charge of using violence to endanger the life or health of a government official performing his duties. He was convicted in July 2020 and sentenced to prison by a Moscow court in a case that Reed told reporters was “clearly political.” The sentence was denounced by U.S. lawmakers and diplomats, including U.S. Ambassador to Russia John Sullivan, who described the evidence used to convict Reed as “ridiculous.”

Now, as the invasion of Ukraine enters its third week, Reed’s family and U.S. lawmakers are calling for his release at a time when his parents say his health is worsening.

“They feel like this is a fairly desperate situation for Trevor right now,” Jonathan Franks, a family spokesman, told The Washington Post.

Reed, who served as part of the presidential guard during the Obama administration, told his parents this week that he was “coughing up blood multiple times a day, running a fever, and still experiencing pain in his lung,” according to a Thursday statement from parents Paula and Joey Reed. Reed’s parents say they believe their 30-year-old son has tuberculosis and also suffered a broken rib after “something fell” on him, and are concerned that he will be sent to solitary confinement instead of getting the medical care he needs.

“Trevor called again, and it’s hard to explain how panicked we are after hearing his voice today,” his parents said in a Thursday statement.

The push for Reed’s release has received bipartisan support in the United States, including Sen. John Cornyn, R-Tex., and Rep. Colin Allred, D-Texas, who have slammed Russian President Vladimir Putin for using the Marine veteran as a political bargaining chip.

“This injustice must end and the Texas delegation is united in working to get Trevor back to his family in North Texas,” Allred told The Post in a statement.

Paula and Joey Reed have urged President Joe Biden to push for their son’s release. When Biden was unable to meet with them this week when the president was in Fort Worth, he called them to apologize for being unable to meet in person, telling them he “said a Rosary for Trevor” on his way to Texas. 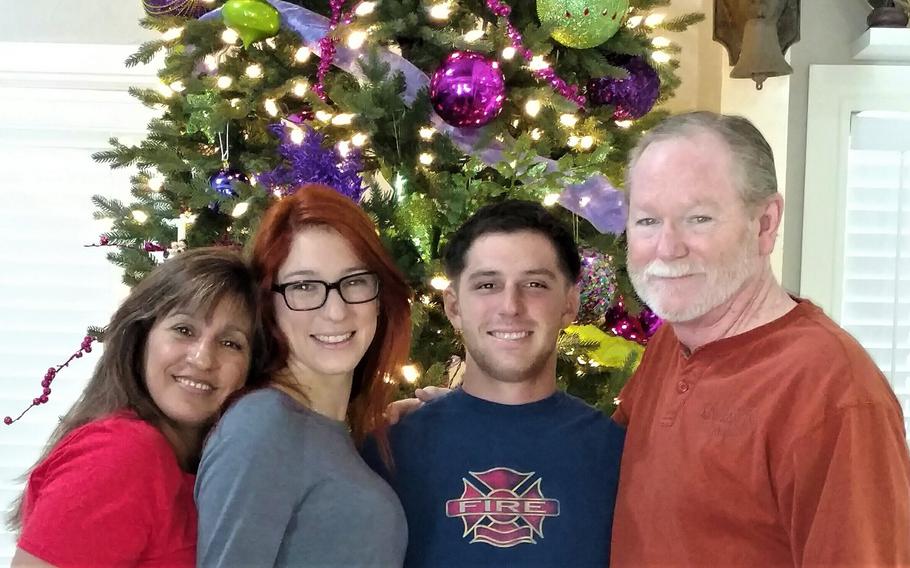 This 2015 image provided by the Reed family shows Trevor Reed, second from right, with his family from left, mother Paula Reed, sister Taylor Reed and father Joey Reed. Russia is holding Marine veteran Trevor Reed, who was sentenced to nine years on charges he assaulted a police officer. (Reed Family via AP)

White House officials said earlier this week that they were working to schedule a meeting on a future date. The White House did not immediately respond to a request for comment on Friday. The Russian Embassy also did not return requests for comment.

Reed’s family said they told their son that they had spoken to Biden and how they “anxiously await hearing from the White House as the president promised.”

“Trevor increasingly feels left behind, and it’s heartbreaking for us to hear that from our son, whose service we are so proud of,” the parents said in a statement.

Attention surrounding Reed’s case comes at a fraught moment between Washington and Moscow. Biden said Friday that the United States U.S. and its allies would strip Russia of trade benefits enjoyed by most nations, adding to financial pressure designed to punish Putin for invading Ukraine. The European Union and the other Group of Seven nations also plan to implement similar measures, which would have a more dramatic impact upon the Russian economy.

Reed is among several Americans to have been convicted in Russian courts in recent years. Griner, 31, is accused of having cartridges containing hashish oil in her luggage at an airport outside Moscow.

Another notable case involves Paul Whelan, also a Marine veteran. Whelan was sentenced to 16 years in prison on espionage charges in June 2020, even though he insisted throughout the trial that he was framed. An appeal for Whelan, 52, is ongoing. Much like Reed’s case, Sullivan has described Whelan’s imprisonment as “a mockery of justice.”

After he was given an honorable discharge from the Marine Corps, Reed went back to school to study at the University of North Texas in 2017, according to a biography from his family posted to a website about his case. A year earlier, he met a Russian woman named Alina Tsybulnik, who would become his girlfriend. In the summer of 2019, he traveled to Moscow to spend time with her and study Russian, in hope of speaking to her and her family in Tsybulnik’s native language.

Then, on Aug. 15, 2019, he attended a party for his girlfriend’s colleagues in which he was encouraged to drink a lot of vodka, according to a statement from his family.

“He has no memory of the evening past drinking vodka and being asked to toast many times,” the family said.

As he shared a ride home with some people from the party in the early-morning hours of Aug. 16, 2019, Reed became nauseated from the drinking and asked the car to stop. When the vehicle stopped moving, his family said he “exited the vehicle and started running around near a busy boulevard late at night.” From there, Reed resisted arrest, hit two police officers and caused the car he was in to swerve and created a hazard on the road, Russian police say.

Reed was detained for nearly a year before he was given a trial in 2020. During that time, he told reporters he had lost about 44 pounds.

Around the time of his trial, Reed’s father set up a website outlining the flaws in the evidence used to charge his son. One of the most notable items, according to Paul Reed, is that traffic video footage allegedly did not show the vehicle swerving, nor did witnesses in the car following the police car to the station see it swerve. Sullivan emphasized at the time that the evidence against Reed was so “flimsy and preposterous” that the case would have been thrown out of court in the United States. Trevor Reed also argued that the evidence wasn’t there.

“Based on the evidence in my case, I think it’s clear what the outcome should be,” he said to reporters in July 2020.

But on July 30, 2020, he was convicted and sentenced to nine years in prison - almost the maximum penalty for the charge. Franks told The Post that the family remains deeply upset that their son was convicted over what he described was a case of “no facts, none.”

“It was a sham conviction and a show trial because he was a U.S. Marine,” he said.

Since then, Reed’s family and attorneys have said their son has struggled. Reed declared last November that he was on a hunger strike to protest being repeatedly placed in a punishment cell “and other serious violations of his rights.”

American lawmakers have been following Reed’s case for years. In June, the House passed a bipartisan resolution from Texas representatives demanding Russia immediately release Reed. That same month, Biden said he had brought up the cases of Reed and Whelan to Putin after a summit in Geneva.

When asked about Griner’s case this week, Allred referenced Reed as being among the Americans jailed in Russia who were “detained and then held either without reason or without a sufficient kind of explanation.” Cornyn has been among the GOP voices to denounce Putin for using Reed, Griner and other Americans detained in Russia as “leverage for some other goal.” The Republican said in an interview with Fox News that he was urging Biden to do more to intervene with Reed’s case.

“It looks like Putin is targeting Americans, and including some Texans, and I don’t think we should step back, or we should refrain from making the point that these people are being unjustly held,” Cornyn said. “And the Biden administration needs to do more to try to raise these issues with Putin and the Russian government and get them released.”

Reed’s father tweeted Friday a question he’s asked many times: “How long will [the U.S. government] wait” to intervene in his son’s case? Franks, the family’s spokesman, said the family remains hopeful that even with the war in Ukraine that their son could be released and returned to Texas. But Franks acknowledged the current situation has made the parents even more exhausted and anxious for what may be ahead for their son.

“It was a difficult situation before the invasion,” Franks said. “And it’s even more difficult now.”