Korean War memorial’s wall of names is said to be riddled with errors, omissions A Texas historian says there may be 1,000 misspellings on the $22 million Wall of Remembrance at the Korean War Veterans Memorial, which was dedicated July 27. (Carolyn Van Houten/The Washington Post)

Megan Marx plans to visit the Korean War Veterans Memorial's new Wall of Remembrance on Wednesday to mark the 70th anniversary of the death of her mother's first husband, Navy Ensign Dwight C. Angell, during the war.

But she won't find his name among the 36,000 fallen Americans etched in granite on the memorial in Washington. Angell was killed at age 24 when his Navy reconnaissance plane was shot down on Jan. 18, 1953, off the coast of China.

Terri Mumley, who plans to join Marx in Washington, won't find the name of her grandfather Lloyd Smith Jr. on the wall, either. Smith, 30, was on the same plane as Angell.

Their names were left off the memorial because the losses were deemed to have occurred outside the direct war zone, an omission, the women say, that was an error, one they are lobbying to fix.

The omissions are among hundreds of errors that mar the memorial, according to the women and two brothers in Texas, Hal and Ted Barker, who have amassed a trove of data about names of those included on the wall, and those excluded.

"It makes my head hurt," Hal Barker, a historian of the war and founder of the Korean War Project, said in a recent interview. "The fact is we have a memorial that has a huge number of errors and no way of paying to fix it."

For example: The last name of Marine Corps Staff Sgt. Ambrosio Guillen, 23, who was posthumously awarded the Medal of Honor for valor, is misspelled Guilien. He was killed in battle on July 25, 1953.

The name of Army Pfc. William Red Horn, a member of the Standing Rock Sioux Tribe, is rendered Horn W Red on the wall. He was 18 when he was killed Dec. 9, 1951.

The last name of Navy helicopter pilot Lt. j.g. John Kelvin Koelsch is misspelled Koelsh. He was shot down July 3, 1951, while trying to rescue an injured comrade. Koelsch was captured and died in captivity on Oct. 16, 1951, according to the Navy.

In 1955, he was posthumously awarded the Medal of Honor for heroism.

Alfred P. Bradshaw, of the Marines, is also on the wall, although he appears to have survived the war and died in Missouri in 2012, according to Hal Barker. 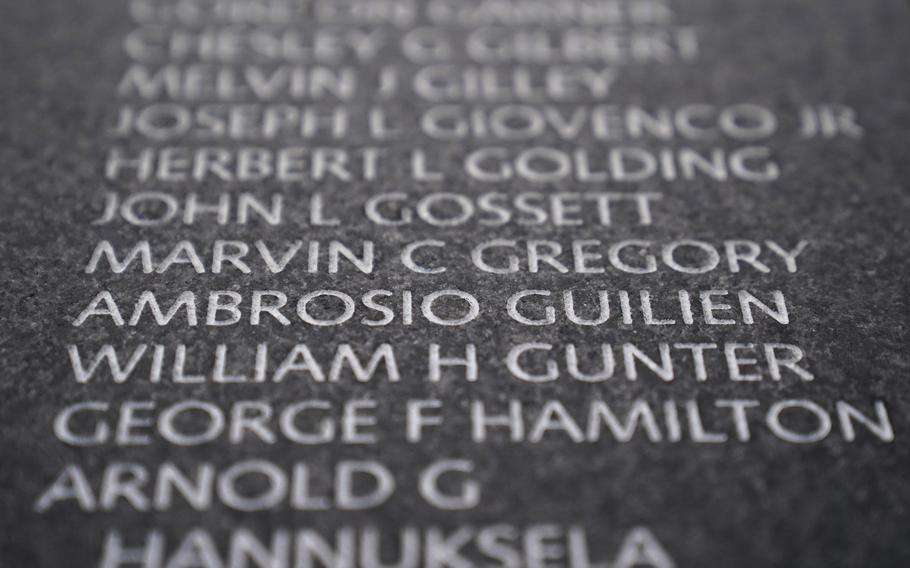 Marine Corps Staff Sgt. Ambrosio Guillen’s last name is misspelled on the wall. He was killed in 1953 and posthumously awarded the Medal of Honor for valor. (Carolyn Van Houten/The Washington Post)

The $22 million Wall of Remembrance at the Korean War Veterans Memorial was dedicated July 27, before a solemn crowd of well-wishers, friends and relatives of the war's dead. In addition to the American names, the wall includes 7,100 names of Koreans who were part of the Korean Augmentation to the U.S. Army (KATUSA).

Marx, of Parker, Colo., and Mumley, of Powell, Tenn., were both present for the dedication, although they knew the names of their relatives were not on the wall.

"We felt like we needed to be there," Mumley, 58, said in a telephone interview. "They should be on the wall. … I did 22 years in the Army … so going to D.C. and going to those memorials means a lot to me."

Her grandfather, a machinist’s mate on the plane, was from Huntsville, in northwest Arkansas. He was married and had two daughters, one of whom was Mumley’s mother. She was 9 when her father died.

Mumley said she took her mother's 82-year-old sister, Mary Louise Allen, on the trip. Allen was 12 when her father was killed, and she had never been to Washington. (Mumley's mother, Sharron Gaddy, 78, had been to D.C. before.)

Allen kept saying "all day long that she thought [her father's name] was going to be on" the wall, Mumley said.

Mumley told her that the name would not be there.

"At 82 years old, she wanted to believe that he would be there," she said. "Of course, when we walked up to the wall … he wasn't there."

She said that even though her grandfather's plane went down off the coast of China, he had also been flying missions over North Korea. He had earned an Air Medal for those flights a few days before he was shot down.

More confusion stemmed from the classification of some incidents as "Cold War" losses, she said.

"The Department of Defense came up with some arbitrary line, that anybody on the right side of this line in the Sea of Japan is considered a Cold War loss," Mumley said. "They're not considered a Korean War loss, even though they're fighting in the Korean War.

"It is crazy," she said. "They deserve to be on the wall. … They were fighting in the Korean War. They were doing a mission that they were asked to. And they were shot down."

Marx said her mother, Gerry, met her first husband, Dwight Angell, when both were in college at what is now Colorado State University. He enlisted in the Navy Reserve in college and then went to flight school.

Eight months later, he was missing in action. His body was never recovered.

Gerry had already suffered a miscarriage and had contracted polio, which affected her right hand, Marx said. She was 22. "I don't think of my mom as a tragic person, but it was really sort of tragic, what happened," she said.

Gerry married a second time, had Megan and her sister, Lisa, and was divorced several years later.

"All of this stuff with Dwight was never far from the surface for her," Marx said. She kept a trunk full of memorabilia from her time with Dwight.

"She never stopped looking for him," she said. "The last document she had was dated 1998."

The mistakes on the wall, which were reported earlier by the New York Times, Texas Monthly magazine and the Military Times, appear to stem from the official list of names compiled by the Defense Department and by the changing definition of who was a casualty of the war.

Barker said, for example, that one file in the National Archives lists Angell and Smith, and others on their plane, as Korean War casualties. Other files do not, he said.

"During the Korean War, operations were undertaken in mainland China, mainland and offshore Russia, in the sea lanes running from Taiwan to far northern Japan, all in support of the main war effort in Korea proper," Barker wrote in a letter to Sen. Michael Bennet (D-Colo.) in 2021. The Korean War Veterans Memorial in Washington was established in 1995 and expanded last year with the addition of the Wall of Remembrance, which includes names of 36,000 Americans and 7,100 of the Korean Augmentation to the U.S. Army. (Carolyn Van Houten/The Washington Post)

A Pentagon spokesman, Army Maj. Charlie Dietz, said in an email Monday: "The errors are a very unfortunate mistake and the [Department of Defense] is working in tandem with the Dept. of Interior to correct those mistakes.

"We are also aware that some names are on the Wall of Remembrance which were not included on the Department's final list of Korean War casualties," Dietz said. "The respective Military Departments reviewed every name on the Korean War Casualty List for correctness against available official military records," he said. "Though not common, the official records themselves may have contained errors."

It was also hard to determine "if a deceased service member that was previously considered a Cold War era loss should be re-categorized as a Korean War loss," he said. "We encourage all family members or concerned citizens to notify the Department of any names that were omitted, misspelled, or included in error."

The National Park Service, which oversees the memorial, did not have a role in choosing the names.

The Korean War Veterans Memorial Foundation, which built the wall, said on its website: "The Foundation used official information about these Veterans (to include name, rank, and service) from the Department of Defense."

Errors were also numerous on the now-40-year-old Vietnam Veterans Memorial wall, the memorial's fund reported in 2019.

And the names of at least 25 others who survived the war were erroneously listed, the fund said.

More than 60 names were misspelled and later reinscribed.

One was that of Chester M. Ovnand, who is believed to be one of the first two American service members killed in the Vietnam War. He and a fellow Army adviser, Dale Buis, died July 8, 1959.

Ovnand's name was originally misspelled Ovnard on the wall. The error was noticed, and the name was reinscribed later at another spot on the memorial.

But the re-inscription was wrong, too. "We messed up his middle initial," said Tim Tetz, the fund's director of outreach. Instead of Chester M. Ovnand, he is listed as Chester A. Ovnand. So he is on the wall twice, both times incorrectly.

The Washington Post's Magda Jean-Louis contributed to this report.