What to do with Arlington National Cemetery's Confederate Memorial 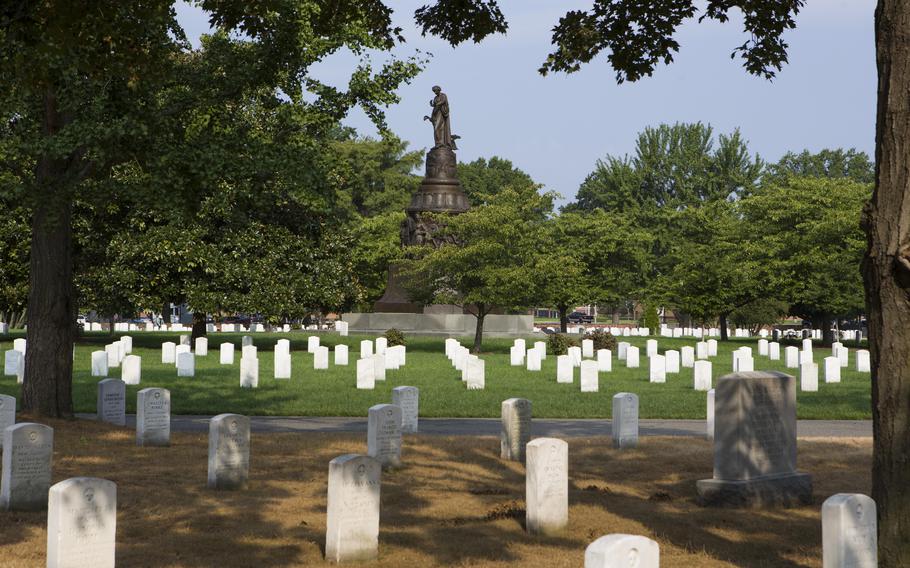 The Confederate Memorial at Arlington National Cemetery, pictured in 2017, has stood for more than a century. (Calla Kessler/The Washington Post)

For 108 years, a massive bronze statue hailing the glory of the South has stood sentry over Confederate war dead buried in Arlington National Cemetery. Soon it will be dismantled on orders from the Pentagon, but then planners will face a quandary: what to do with a disgraced monument that some say may still have a historical lesson to impart.

The Defense Department's directive, included within an extensive mandate to strip away all remaining attachment to the Confederacy, is stark and vague. The statue is to be taken down, it says, its bronze features removed, and the Department of the Army, which manages Arlington, should find "the most cost-effective method" for disposal. While an advisory committee has identified some options — storing away the 22 main components, trashing the memorial entirely, or donating it to another organization or museum — thus far, no consensus has emerged.

The churn over Arlington's Confederate Memorial joins other debates, reignited in 2020 by the murder of a Black man, George Floyd, about the place such expressions should occupy in a society still afflicted by the racism and division that trace to America's Civil War.

At a virtual public meeting of the cemetery's advisory panel last month, one committee member asked if the memorial could be returned to the United Daughters of the Confederacy, which commissioned it decades ago. "It is obviously one of the options that could be pursued," Renea C. Yates, director of the Office of Army Cemeteries, responded.

Multiple members of the panel sounded frustrated that the monument's fate had been decided without their input, and suggested it could be stored and someday brought back for exhibition as a historical artifact. More than 20 descendants of the sculptor, Moses Ezekiel, have already objected to such a notion, demanding the statue's removal as far back as 2017 and calling it a "relic of a racist past." 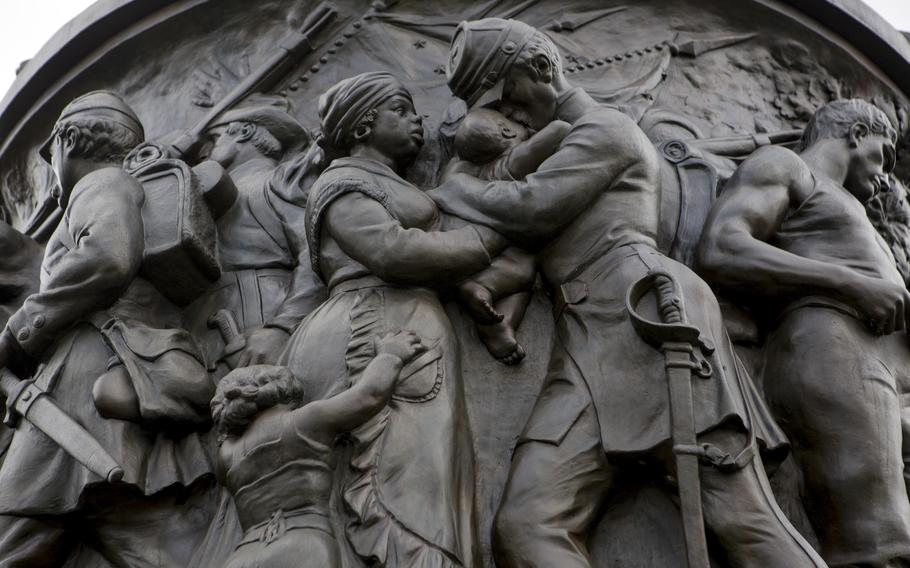 Stephen Carney, the cemetery's command historian, told the committee about a previous plan Arlington National Cemetery's staff had envisioned, involving a "semitransparent" viewing panel that would, in a sense, transport visitors back in time.

"Looking through it," he said, "you would see the memorial as it stood."

The advisory committee won't be making any decisions alone. It is required by the National Historic Preservation Act to seek the public's input, a process that will conclude next year. Already, 300 written comments have been submitted in response to a call-out in the Federal Register, and at least a dozen people have asked to address the committee in person.

A spokesman for the cemetery, John David Harlow, said a vote on the matter has not yet been scheduled.

The cemetery, with its arresting views of the D.C. skyline, is just across the Potomac River in Virginia. Originally a plantation belonging to descendants of Martha Custis Washington, including Confederate general Robert E. Lee, the land that would become the cemetery was acquired by the U.S. Army in 1861 and designated as a settlement for freed people two years later. Arlington became a national cemetery in 1864, but the southern part of the land remained a "Freedman's Village" until 1900.

Completed in 1914, the sculpture depicts two false tropes common to the Lost Cause effort to romanticize Southern defeat in the Civil War: a weeping Black woman — a "mammy," according to the cemetery — holding the baby of a white Confederate officer, and an enslaved man accompanying his enslaver into battle. In the past five years, cemetery caretakers have acknowledged the intentionally misleading imagery with interpretive efforts, including signage at the site and a webpage that explains how the memorial was part of a larger attempt to gloss over the evils of slavery. 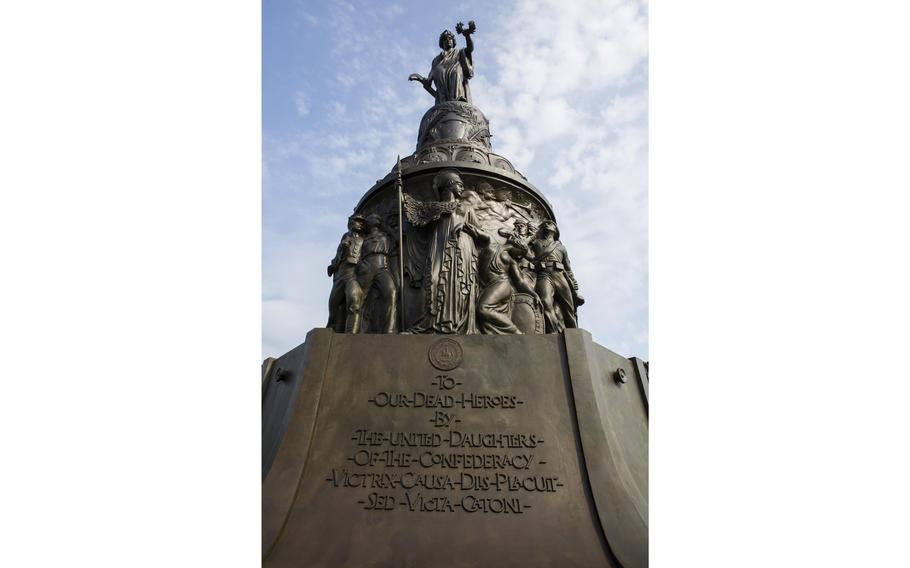 Descendants of the memorial’s sculptor, Moses Ezekiel, have called for its removal. (Calla Kessler/The Washington Post)

Craig Syphax, president of the Black Heritage Museum of Arlington, traces his ancestry back to Maria Syphax. The daughter of George Washington Parke Custis and enslaved woman Arianna Carter, Maria Syphax would eventually gain her freedom, but remain at the Freedman's Village, teaching trade skills to other emancipated people.

Arlington is where his family became "part of the fabric of America," Craig Syphax said, explaining that he'd favor seeing the memorial preserved for educational purposes.

"I wouldn't be opposed to it being destroyed," Syphax said. "But I would rather see it just being held onto [so] the next generation could have something that could tell a story, a positive story somehow."

United Daughters of the Confederacy, which maintains a headquarters in Richmond, has condemned the use of Confederate memorials to advance "racial divisiveness or white supremacy," the group's president general, Jinny Widowski, wrote in a statement posted on its homepage. The organization nevertheless opposes the removal of such memorials from public spaces. It did not respond to a request for comment.

Gaines Foster, a professor of history at Louisiana State University who has written extensively about the Civil War's aftermath, said the monument should not be returned to the organization that commissioned it.

"I don't see it as belonging to the UDC as much as some people might," Foster said, noting that the memorial was financed through a fundraising campaign that extended beyond the organization. "On the other hand, I think if there is a museum where it can go and be properly contextualized, it's a splendid example of the South's attempt to vindicate slavery and secession, and can help people teach that."

Removing monuments no longer deemed worthy of honor, Foster said, is a practice dating to ancient times. The instinct to preserve what remains is far newer. Attempts to do this can be seen in places like Russia's "fallen monument park" for toppled Soviet statues.

Foster's proposal: Find a museum with space to accommodate Arlington's Confederate Memorial indoors, where it can be interpreted with care. The city of Richmond, which in December completed a two-year, $1.8 million project to remove statues honoring Confederate generals, has taken this course, transferring them to the Black History Museum and Cultural Center of Virginia.

"Making them part of the landscape is what gives them their power," Foster said. "Where if you're in a museum, you're saying, 'This is the past that we're looking at. Not something that we celebrate in the present.'"