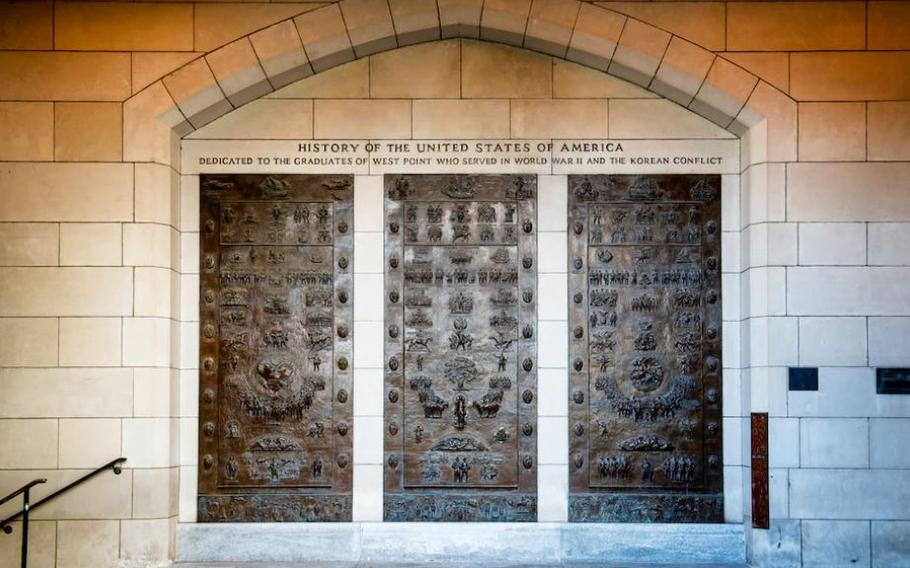 One of the figures depicted in these bronze panels at the U.S. Military Academy at West Point, N.Y., is a hooded Klansman. (Elizabeth V. Woodruff/U.S. Army)

(Tribune News Service) — The United States Military Academy at West Point has begun ridding its campus of traces of the Confederacy as part of the military’s efforts to address racial injustice.

“During the holiday break, we will begin a multi-phased process, in accordance with Department of Defense directives, to remove, rename or modify assets and real property at the United States Military Academy and West Point installation that commemorate or memorialize the Confederacy or those who voluntarily served with the Confederacy,” Superintendent Lt. Gen. Steve Gilland said in a message on Monday. “We will conduct these actions with dignity and respect.”

The first to go will be Robert E. Lee, who also served as superintendent of the military college before joining the Confederate army to fight the North during the Civil War.

A portrait of the general clad in his Confederate uniform will be removed from the library and put in storage at the West Point Museum. A stone bust of the southern general will be taken out of Reconciliation Plaza, and his quote about honor will be scrubbed from Honor Plaza by spring 2023.

Also on the way out are a triptych of bronze panels 11 feet tall by 5 feet wide that depict Lee among several historical figures, along with an image of a hooded, armed man, captioned “Ku Klux Klan.”

They too will be stashed in storage “until a more suitable location is determined.” In addition, various streets, buildings and other areas throughout West Point that are named after Lee and others who served in the Confederacy will be renamed.

Stone markers in the academy’s Reconciliation Plaza that commemorate the Confederacy will be modified “with appropriate language and images that comply with the Commission’s recommendations” by spring 2023, Gilland said.

The move comes after the DOD accepted the October 2022 recommendations of the Congressional Naming Commission. A three-month waiting period that was part of the commission’s charge as outlined in the 2021 National Defense Authorization Act ended on Dec. 18.

West Point is one of nine institutions instructed to change their racist-past references. Two-thirds of its 4,600 cadets are white, and 13% are Black, federal data show.