Ia Drang Valley: where the US truly went to war 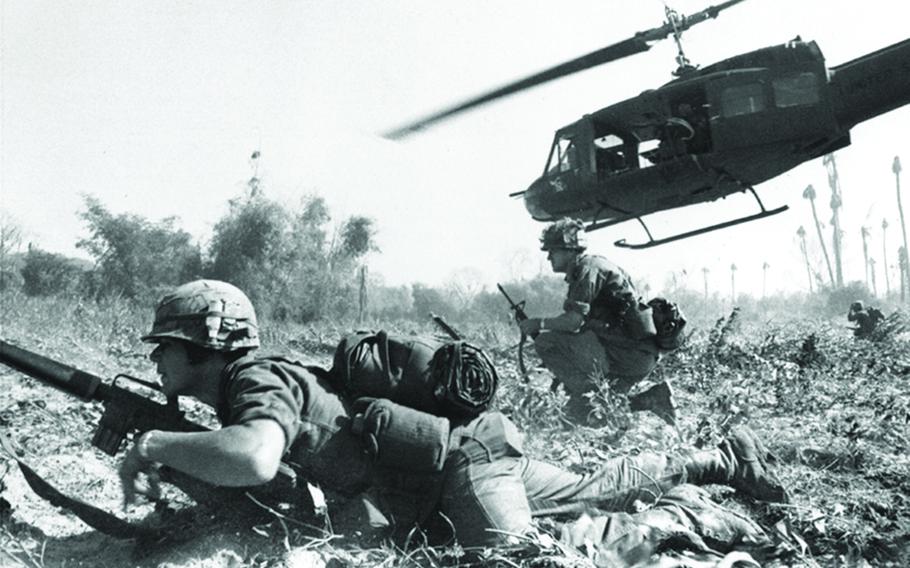 This article was originally published Nov. 11, 2015, as part of the Vietnam at 50 project. It is republished unedited in its original form.

1965 was the year America took the gloves off in Vietnam, moving from “advising and assisting” the South Vietnamese military to an active combat role. The first U.S. ground combat troops arrived there in March. That same month, the United States began bombing North Vietnam in Operation Rolling Thunder. In November, troops would take on North Vietnamese regulars for the first time in the Battle of Ia Drang Valley. Gen. Westmoreland, commander of the U.S. Forces, was Time magazine’s Man of the Year.

Once again, America was at war.

On Nov. 14, 1965, soldiers from the 2nd Battalion, 7th Cavalry Regiment, loaded onto helicopters and flew to a remote patch of ground in the Ia Drang Valley of South Vietnam’s central highlands. Within an hour, they came under attack for the first time by North Vietnamese regulars, launching a four-day battle that killed hundreds of Americans and perhaps more than 1,000 Vietnamese and changed the course of the Vietnam War.

The Ia Drang Valley is where the U.S. truly went to war.

After years of advising the South Vietnamese against the communist North, and months of chasing black-clad guerrillas, a large formation of American troops faced well-trained, well-equipped regulars of the People’s Army of Vietnam. The North Vietnamese enjoyed numerical superiority in the valley. Unlike Viet Cong guerrillas, the northerners were prepared to stand and fight.

“It had been a small undeclared war mainly fought by South Vietnamese troops with a few U.S. advisers in the mix, sometimes on the ground, sometimes in helicopters,” said Andrew Wiest, a history professor at the University of Southern Mississippi and the founding director of its Dale Center for the Study of War and Society.

“It was much bigger than what we had seen before against a much more tenacious enemy,” Wiest said of the battle. “The largely [North Vietnamese Army] units we ran into, they were interested in staying and fighting.”

Fighting was so intense that a battalion commander, Lt. Col. Hal Moore, reported finding a dead American “with his hands at the throat” of a dead North Vietnamese soldier. Three U.S. soldiers were awarded the Medal of Honor for bravery during the battle.

Mindful of the effects of propaganda, each side declared victory. Moore considered the outcome a draw.

By whatever measure, the chaotic, bloody Battle of the Ia Drang Valley set the tone for the rest of war. 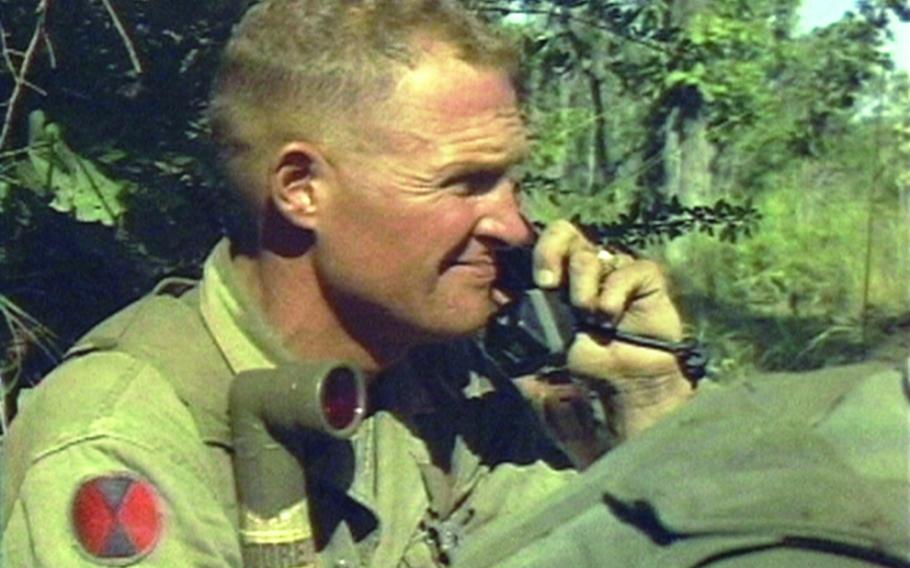 Lt. Col. Hal Moore, commander of the 1st Battalion, 7th Cavalry, on the radio during the fight for LZ X-Ray in the Ia Drang Valley of Vietnam. Photo extracted from U.S. Army motion picture footage from November 1965. (U.S. Army)

To the Americans, the battle validated their new “airmobile” strategy — using helicopters to move troops quickly into remote jungle areas often without roads and inflict heavy casualties by airpower and artillery.

The outcome convinced the North Vietnamese that they could reduce the threat of U.S. firepower by engaging the Americans at close quarters where U.S. airstrikes would prove risky and then melt away into the jungle or across the border into sanctuaries in Cambodia.

Each side realized it was fighting a war of attrition. The only question was which side could outlast the other.

The battle was part of a campaign for control of the strategic central highlands, which divided South Vietnam north to south. Controlling the central highlands would enable the North Vietnamese to cut the south in two and separate South Vietnam’s northern cities of Hue and Da Nang from the capital, Saigon, to the south.

A month before the Ia Drang operation, North Vietnamese regulars attacked a U.S. Special Forces base at Plei Me, hoping to lure the ineffectual South Vietnamese army out of its base at the provincial capital, Pleiku, and destroy it. U.S. airpower lifted the siege and drove back the North Vietnamese.

Lacking confidence in the South Vietnamese, Gen. William C. Westmoreland ordered the U.S. 1st Cavalry Division, which had been in country about a month, to pursue the enemy, using newly minted airmobile tactics.

Moore and his 450-man 1st Battalion, 7th Cavalry Regiment, flew into Landing Zone X-Ray at the base of the Chu Pong Mountain west of Plei Me and miles from the Cambodian border.

U.S. intelligence knew that North Vietnamese regulars — probably a single regiment — were in the area. Shortly after landing, a U.S. patrol captured an unarmed North Vietnamese deserter who told them that three regiments, roughly an entire division, were hiding in the nearby mountain.

About 40 minutes later, North Vietnamese launched their attack, hiding in the tall elephant grass and in stands of trees.

A U.S. platoon was lured into a trap and surrounded, holding off repeated North Vietnamese attacks despite the death of the platoon leader and several noncommissioned officers.

After two days of intense North Vietnamese attacks and mounting casualties, Moore radioed the code word “Broken Arrow,” calling for all available aircraft to rescue an American unit about to be overrun.

The airstrike broke the North Vietnamese siege and enabled reinforcements to reach the LZ. 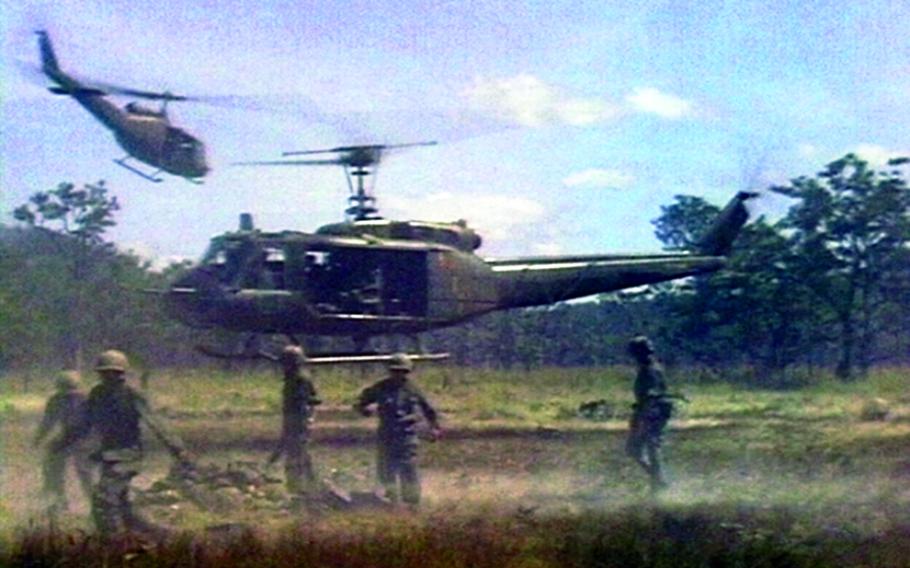 Moore and his battalion were evacuated the next day, Nov. 17. A fresh unit, the 2nd Battalion, 7th Cavalry, was ordered to march from LZ X-Ray to LZ Albany a few miles away.

Among the survivors of the ambush was 1st Lt. Rick Rescorla, a platoon leader who died Sept. 11, 2001, rescuing people from the World Trade Center’s south tower until it crashed around him.

The North Vietnamese regulars and Viet Cong guerrillas absorbed even higher casualties from better-equipped American troops on the ground as well as helicopter gunships and B-52s raining bombs, bullets and napalm.

A young United Press International reporter, Joseph Galloway, became the only civilian decorated for gallantry during the war, awarded a Bronze Star with “V” device for valor for carrying a wounded soldier off the battlefield under intense fire.

Westmoreland, a veteran of World War II in Europe, declared Ia Drang a victory because the North Vietnamese were driven from the field after suffering major casualties. The communist threat to the central highlands subsided. The losses at Ia Drang prompted the North Vietnamese to rethink their plan to confront U.S. forces with large, conventional formations, reverting to hit-and-run attacks where U.S. air and artillery power was less effective.

The American death toll was a shock to President Lyndon Johnson, who immediately dispatched Defense Secretary Robert McNamara to Saigon to find out what was going on. McNamara told Johnson that the U.S. could continue with its limited engagement or massively escalate the war with hundreds of thousands more troops. Each option, he warned, had a good chance of leading to a stalemate.

But Westmoreland believed the battle validated the airmobile tactic of quick strikes to catch the enemy off guard, kill as many as possible and withdraw back to base. The idea was to kill the enemy, not necessarily hold ground, and bleed the North Vietnamese until they tired of war. 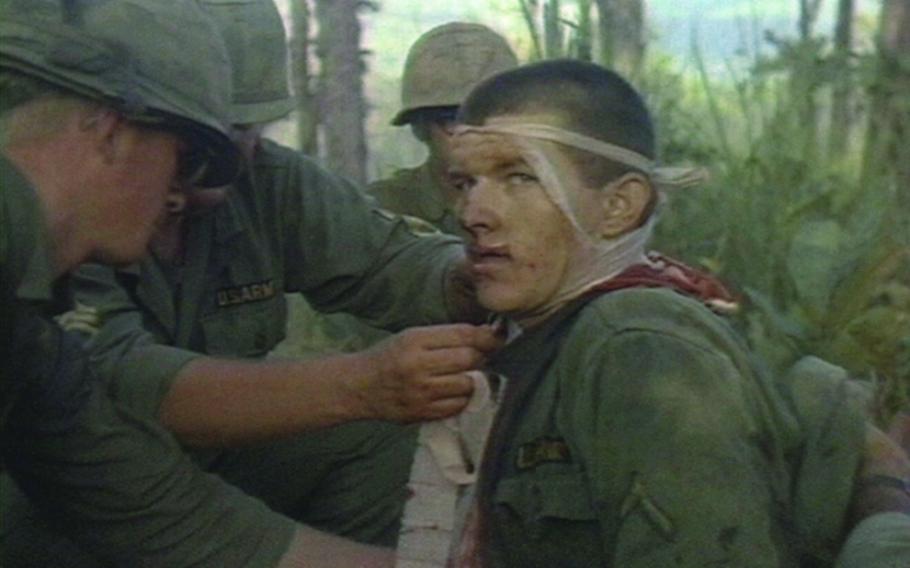 A wounded soldier of the 1st Battalion, 7th Cavalry, is attended to by fellow comrades during the fight for LZ X-Ray in the Ia Drang Valley of Vietnam. Photo extracted from U.S. Army motion picture footage from November 1965. (U.S. Army)

“This strategy, as flawed as it was, had some potentiality of working,” Wiest, the historian, said. “The problem was it had to be applied by a country that was much more willing for it to be applied for the long haul. Westmoreland’s biggest problem with the strategy was that he thought it would work in two or three years when it would have taken 10 or 12.”

Absent was an effective plan for winning over the civilian population caught in the crossfire, said James Willbanks, a Vietnam veteran who is the director of the Department of Military History at U.S. Army Command and General Staff College.

“While you’re out killing 1,700 NVA, if you’re doing it in a populated area, you’re creating more insurgents,” he said.

In Hanoi, the North Vietnamese leadership was prepared for huge losses. In 1946, Ho Chi Minh had warned the French, who were trying to restore control over their former protectorate, that “you can kill 10 of my men for every one I kill of yours, yet even at those odds, you will lose and I will win.”

He assumed that like the French, the Americans would tire of seeing their young men coming home in body bags.

“They realized, ‘Yeah, it’s going to be bloody, but we can fight these guys,’” Willbanks said.

In Washington, Ia Drang convinced Johnson that he was in for a long, bloody war. Westmoreland’s recommendation for more troops carried the day — even as Johnson and his advisers privately questioned prospects for success. No one wanted to look weak in the face of “communist aggression.”

“I think McNamara knew, deep down; I think Johnson knew,” Wiest said. “I think it also speaks to the depths these guys were into the Cold War reality at the time. There’s certainly politics involved in it, but I do think these guys, as mythological as it turned out to be, were true Cold War believers.

“I think this battle pushes Johnson further into Westmoreland’s corner. He’s in a unique position to want to believe these optimistic reports and he’s getting a lot of them.”