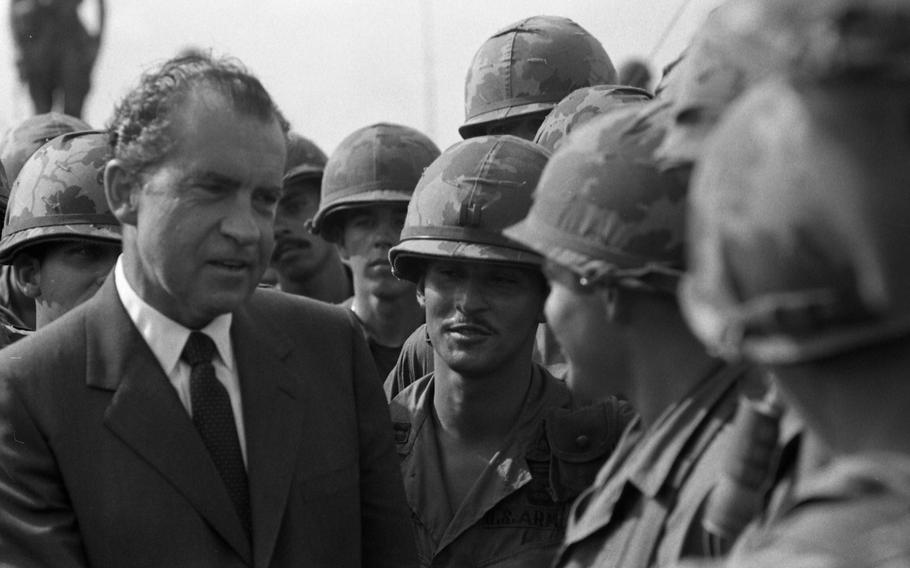 President Richard Nixon chats and shakes hands with the men at the 1st Infantry Division's Di An base camp in South Vietnam on July 30, 1969. (Jim Clare/Stars and Stripes)

Vietnam had been Lyndon Johnson’s war, and it destroyed his presidency. Richard Nixon entered the White House on Jan. 20, 1969, anxious to avoid Johnson’s fate.

Nixon had been elected on the promise to end the war in a manner that would preserve America’s national honor – which meant leaving a viable government in South Vietnam.

Nixon told his advisers he believed the public would give him no more than a year to make good on that promise.

Support for the war was eroding, especially after the shock of the Tet Offensive the year before.

A Gallup poll in 1965 showed that 64 percent of the U.S. public approved of American military involvement in Vietnam. By January 1969, 52 percent of the public believed entering the war was a mistake, according to Gallup.

Five days after assuming the presidency, Nixon dispatched a team of negotiators to Paris to meet with representatives of North and South Vietnam and the National Liberation Front, the political arm of the communist Viet Cong.

The meeting did not go well. The Communist delegations refused to recognize the legitimacy of the South Vietnamese government and even objected to the shape of the meeting table.

For their part, the Communists demanded the withdrawal of all U.S. troops and the dissolution of the South Vietnamese government. The Americans insisted the Communists recognize the South’s sovereignty.

Even as they went through the motions of talking peace, each side stepped up the violence in hopes of pressuring the other to accept its demands.

Despite huge losses in the Tet Offensive, the Communists launched a series of sharp attacks during Nixon’s first full month in order to test his resolve. One of those targets was the giant U.S. logistics base at Long Binh, which was considered a relatively safe areas about 20 miles northeast of Saigon.

On Feb. 19, a Communist defector told South Vietnamese interrogators than the North planned a major assault against Long Binh, where most of the Americans were supply clerks, mechanics, truck drivers and military police rather than battle-hardened infantry.

However, the defector’s information did not reach the American command at Long Binh until Feb. 22, the day the attack was supposed to begin. That left little time to reinforce the base.

About 11:30 that night, 82 mm mortar rounds began to rain down on the Long Binh perimeter. The American defenders responded with machine gun fire, mortars and counterattacks by AH-1 Cobra gunships. After about five hours the fighting subsided. Five Americans were killed and 63 were wounded. Communist losses were more than 130 dead.

After the battle, troops of the 11th Armored Cavalry Regiment found an extensive Viet Cong tunnel complex no more than a mile from the Long Binh perimeter, complete with stocks of ammunition, weapons and other supplies.

The discovery drove home the vulnerability of a location that had been considered among the safest American bases in South Vietnam. The nationwide attacks claimed more than 1,100 American lives before U.S. artillery and airpower defeated the Communist offensive.

By early spring, U.S. combat deaths in Vietnam had surpassed the figure of 33,629 who had died in the Korean War.

Nixon, who had built his political career as an anti-Communist hawk, had no intention to sit back and let the enemy set the tempo of the war.

On March 18, the U.S. Air Force launched Operation Menu -- the carpet-bombing of Communist sanctuaries and supply lines in Cambodia by B-52 Stratofortress bombers based at Andersen Air Force Base in Guam.

Over the next four years, the United States would drop more than 4 million tons of explosives over Cambodia.

The bombing campaign failed to drive the North Vietnamese out of Cambodia, which was a neutral country. However, it helped destabilize the country and pave the way for the murderous Khmer Rouge Communists to seize power there six years later.

With the legality of bombing a neutral country in question, the operation was so secret that an elaborate system of dual mission reports was put into place to hide the facts from Congress and the American public.

Only a handful of senior officials in the administration and the armed forces were aware of the full scope of the campaign. Even the Communists played along, keeping silent because they didn’t want to confirm their presence in Cambodia.

On May 9, however, The New York Times reported on the secret bombing, citing an anonymous source within the Nixon administration. Nixon was so furious that he ordered the FBI to track down the source of the leak.

The source of the information was never identified despite months of illegal wiretaps of suspected leakers.

On the ground, U.S. and South Vietnamese forces pursued a policy known as “maximum pressure” against North Vietnamese and their Viet Cong allies in the South. On May 10, the 101st Airborne, the 9th Marine Regiment, and the South Vietnamese 1st Infantry Division launched Operation Apache Snow to clear Communist forces from the A Shau Valley near the Laotian border and seal off escape routes into Laos.

Faced with a superior force, the Communists responded with a fighting retreat from the valley, but the 29th North Vietnamese Regiment chose to make a stand in a bunker complex on Hill 937, known to the Vietnamese as Dong Ap Bia. or “mountain of the crouching beast.”

It took 10 days of fighting, including 11 infantry assaults and 72 American lives, before U.S. and South Vietnamese troops managed to seize the steep, heavily forested hill.

The U.S. Army used more than 1,000 tons of bombs, 142 tons of napalm and 31,000 rounds of 20 mm shells, turning the hill into a ghostly scene reminiscent of World War I. Some of the American infantry companies suffered Civil War-level casualties between 50 and 75 percent.

An estimated 630 Communist defenders died there, according to the official U.S. body count.

Yet two weeks after the fighting ended, the Americans abandoned Hamburger Hill, declaring it had no strategic value.

The decision may have made sense militarily since the only reason for fighting there was to subdue the North Vietnamese. The U.S. command considered the outcome a success because of the large number of enemy dead.

Ever since the two world wars, the American public defined battlefield success by how much territory had been won or lost.

Abandoning a place where so many young Americans had given their lives only reinforced the idea that the Vietnam War was little more than pointless slaughter – regardless of who was in the White House.

Sen. Edward M. Kennedy of Massachusetts, whose brother President John F. Kennedy was an architect of the U.S. role in Vietnam, took to the Senate floor to denounce the battle.

“I feel it is both senseless and irresponsible to continue to send our young men to their deaths to capture hills and positions that have no relation to ending this conflict,” the senator said. “The assault on Hamburger Hill is only symptomatic of a mentality and a policy that requires immediate attention. American boys are too valuable to be sacrificed for a false sense of military pride.”

For Nixon, the public backlash could not have come at a worse moment.

Peace talks had stalled, and the carnage was continuing. Opposition to the war was burgeoning among the American public, especially on university campuses.

In April, Harvard students took over the University Hall and demanded the administration end its ROTC program. The university sent in the police to clear the hall with truncheons and arrests. Anti-war rallies were held in in cities from New York to Los Angeles.

In June, most of the graduating class at Brown University turned their backs on Nixon’s National Security Adviser Henry Kissinger when he delivered the commencement address.

Under pressure from the White House to hold down casualties, Gen. Creighton Abrams, the top U.S. commander in Vietnam, ended the “maximum pressure” policy against North Vietnamese forces in favor of “protective reaction” where U.S. troops would launch offensive operations only if threatened by Communist units.

With anti-war sentiment roiling the nation, Nixon flew to the Pacific island of Midway for a meeting June 8 with South Vietnamese President Nguyen Van Thieu.

Nixon announced he would begin withdrawing U.S. troops from South Vietnam, starting with 25,000 as soon as possible. Rather than pursuing total victory over the Communists, the United States would gradually leave South Vietnam and hand over the war to the South Vietnamese. “Peace with honor” and “Vietnamization” became the new bywords.

Thieu was alarmed by the message. Nixon reminded him that “we have a difficult political problem in the U.S.” He argued that the status quo could lead to a Democratic victory in the 1970 mid-term elections, which would make South Vietnam’s position even more precarious.

Thieu had little choice but to accept the new policy and hope the Americans would stand by their pledge not to abandon their South Vietnamese allies.

In order to meet his “peace with honor” goal, Nixon knew he had to jump-start the Paris Peace Talks. Both sides were using the public forum for political theater, and the sessions were little more than a way to restate their longstanding demands before television cameras.

On Aug. 4, Kissinger held his first secret talks with the North Vietnamese, beginning a process that would take nearly four long years to succeed.

With or without the South Vietnamese, the talks were complicated because the United States and North Vietnam had such vastly different goals.

The U.S. wanted a way to end its military role without seeing the South Vietnamese government collapse soon after the American departure.

U.S. politicians of that era were still deeply affected by the 1949 collapse of the pro-Western government in China. Political careers in the United States were built or ruined by the yearslong debate over who “lost China.”

The North Vietnamese, however, wanted the Americans out of Vietnam so they could topple the Saigon government and reunite the country.

By the end of 1969, Nixon found himself facing the same challenge that had crushed Johnson – how to end an unpopular war without a humiliating defeat that would weaken the U.S. administration at home and before its Cold War adversaries in the Soviet Union and China.

On Nov. 3, Nixon appeared on national television to plead for public patience as he struggled to end the war.

His goal was to rally a segment of the population still reluctant to accept defeat in the name of peace – his so-called “silent majority.”

“So tonight, to you, the great ‘silent majority’ of my fellow Americans, I ask for your support,” Nixon said. “Let us be united for peace. Let us also be united against defeat. Because let us understand: North Vietnam cannot defeat or humiliate the United States. Only Americans can do that...”

With those words, Nixon opened a fissure that has plagued American society to this day.