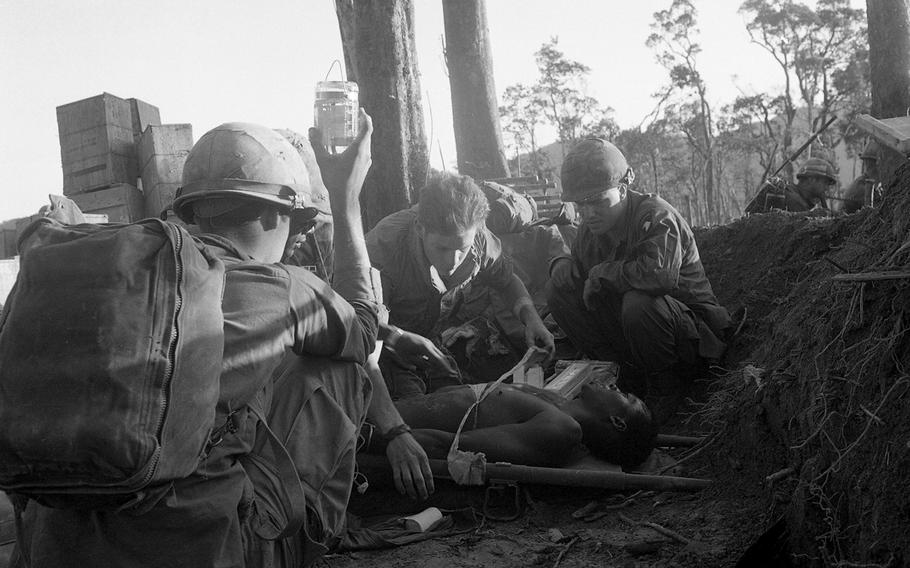 One soldier holds an IV bottle high up in the air as a medic puts bandages around a chest wound of an unidentified soldier. Men of the 3rd Battalion, 187th Infantry Regiment, 101st Airborne Division had been trying to take "Hamburger Hill" from North Vietnamese forces. (Jim Clare/Stars and Stripes)

Fifty years after leading a company of soldiers up Hamburger Hill, Gerald “Bob” Harkins sees the assault against burrowed-in North Vietnamese army forces no differently than he did then.

“Our mission in life was to find the NVA and kill them,” said the 75-year-old Harkins, who now lives in Georgetown, Texas. “And we found them, and we did our best to kill as many as we could.

“The hill itself had no meaning. It was just a piece of dirt. The thing that made it important to us was the NVA unit there.”

In the wake of the battle in May 1969, there was no such clarity in America, where anti-Vietnam War protests were in full swing and elected lawmakers loudly decried the bloody Battle of Hamburger Hill, a 10-day meat grinder that left 72 U.S. soldiers dead and hundreds more wounded. Unlike the brief clashes that had characterized most jungle engagements during the Vietnam War, this battle had lasted long enough for American journalists to arrive and report firsthand on its ferocity.

Just as the American soldiers vanquished the last of the defenders on the hill, Democratic Sen. Edward Kennedy of Massachusetts took to the Senate floor to rail against what he called a “senseless and irresponsible” battle.

“American boys are too valuable to be sacrificed for a false sense of military pride,” he said.

The sense of futility was compounded two weeks after the battle’s end, when the Army abandoned the hard-won “Hill 937,” the U.S. military’s designation for Dong Ap Bia, what locals called “the mountain of the crouching beast.”

Poisoned will for war

North Vietnam’s Tet Offensive in 1968 had proven to be a pivotal point in the war because the enemy’s vigorous show of force undermined the repeated assurances by U.S. military officials that the enemy was demoralized and victory was just around the corner.

Hamburger Hill had been the kind of extended battle that U.S. military commanders believed they could use their military power to defeat and demoralize the enemy.

“We had the firepower and airpower and the training,” said James Wright, a historian and author of “Enduring Vietnam: An American Generation and its War.”

“We thought we could take care of them and just teach them they could not win a war against our forces, and, therefore, they should negotiate,” he said.

Yet the aftermath of the clash, which left more than 600 North Vietnamese soldiers dead on the battlefield, proved to be a strategic debacle for the U.S. military.

“For those people who were increasingly opposed to the war, Hamburger Hill underlined and seemed to justify their opposition,” Wright said.

“After Tet, Vietnam had increasingly lost public support, and I think it was the loss of that support and the controversies that came out of Hamburger Hill that coincided with the beginning to draw down troops in Vietnam,” he said.

A month after the battle, in June 1969, President Richard Nixon announced a plan for “Vietnamization”: South Vietnamese soldiers would assume the combat role, and U.S. troops would begin coming home.

Harkins, who commanded Alpha Company, 3rd Battalion, 187th Airborne Infantry, saw few signs that this operation would differ much from others they had conducted.

Alpha Company had continually patrolled A Shau Valley near the Laotian border to prevent the North Vietnamese from using it as a staging area for a large-scale attack in the style of the Tet Offensive, said Harkins, who retired as a colonel in 1993 after a 28-year Army career that included two combat tours in Vietnam.

“That’s the only time in my two years in Vietnam that I got a written operations order,” he said. “That told me that there was something a little bit more than the normal.”

The briefings he and other unit commanders had before the assault, however, offered no clue to the strength of the North Vietnamese force awaiting them.

U.S. intelligence had failed to detect the honeycomb of tunnels and bunkers riddling the hill, hiding a formidable force of North Vietnamese soldiers. U.S. B-52 bombers had not been used to soften up the enemy stronghold, and by the time their presence became clear, U.S. soldiers were too close for such bombing.

“We were facing steep, razor-backed ridges,” he said. “You maybe had 36 inches of flat on the top.”

The first assault was cut short when a U.S. gunship mistakenly dropped a rocket on the command group of Bravo Company, killing its commander, command sergeant and others, Harkins said.

The terrain had been covered with 100- to 300-foot trees when the battle began, Harkins said. By the time his company made its first attack, the hillside looked “kind of like a football field with a bunch of dead sticks,” he said. “When it rained on the 18th, it was like a mud bath.”

The media accounts that Americans saw were grim.

An Associated Press reporter on the scene quoted a soldier complaining that the 187th commander “won’t stop until he kills every damn one of us.” Another soldier said they could not “take it much longer.”

The hill’s nickname echoed that of the Battle of Pork Chop Hill during the Korean War, in which a great number of soldiers on both sides died fighting over terrain that had no real strategic significance.

“The picture that’s presented through that reporting is one of futility,” said Gregory Daddis, an associate professor of history at Chapman University in Orange, Calif., who specializes in the Vietnam War. “I don’t know if they were intending to send that message, but it clearly came through in their reporting.”

With public opinion turning against the war in the wake of Tet and Hamburger Hill, elected officials had the political cover to openly criticize the military, said Daddis, a retired Army colonel who served in operations Desert Storm and Iraqi Freedom. “Up until that point, there were probably some political calculations going on, and politicians were much more cautious about criticizing military leaders.”

Harkins was wounded on the final assault May 20 and sent off the hill to recover with many of the other wounded.

“I had kids come over to my bed I was lying in and ask me, ‘Sir, did we do the right thing? Kennedy says it was the wrong thing to do.’”

“We did what we were told to do,” Harkins recalled telling them, “and we did it pretty damn good.”

Harkins was back in the field with his unit within a few days, but the way Americans fought the war began to change.

“We didn’t engage units anymore,” Harkins said. “We tried to pacify and help the South Vietnamese fight their own war.”

Nature of the war

America’s strategic goals in Vietnam had been more political than military, Wright said, and the role of military tactics in helping implement that political strategy was nebulous to many Americans.

“What battles like Hamburger Hill show is the problem of translating battlefield success into something larger on the political front,” Daddis said. “Soldiers on Hamburger Hill may have killed quite a few enemy there, but did that translate into increased political loyalty for the Saigon regime?”

Wright said the nature of the Vietnam War was hard for most people to understand. “The justification for the war became more and more difficult politically in the United States, and Hamburger Hill became the symbol of this.”

For some who fought, the nature of the war and Hamburger Hill were a bit simpler.

“The reason we didn’t keep the hill was there wasn’t any bad guys there,” Harkins said. “We moved on to the next set of bad guys.”