WWII Museum’s ‘Expressions of America’ is a must-see

Why? Because words and photos don’t do it justice. Not even close. This is something every American should experience for themselves.

The museum presented the exhibit, which uses projection mapping to transform the outer walls of the museum buildings into living murals and a nighttime sound and light experience, for the first time Wednesday night for media and invited guests.

Hosted by actor and longtime museum supporter Gary Sinise, Expressions of America tells the story of everyday Americans who served in combat and the loved ones they left behind, and the “power of individual Americans to impact the world around them during a time of monumental conflict,” according to the museum.

The exhibit also pays loving tribute to legendary comedian Bob Hope, whose USO shows brought a piece of home to weary soldiers and sailors during the war, as well as smiles and laughter.

“I think my father would have been very honored to know that an esteemed institution like The National WWII Museum is helping to preserve his legacy for future generations through Expressions of America,” said Linda Hope, Bob Hope’s daughter and Chair/CEO of Bob & Dolores Hope Foundation.

“Nothing brought him more joy than to hear the laughter of the troops he entertained around the globe. In a time of global darkness, he understood the importance of bringing a piece of home to the frontlines. I’m touched to know that his story and service will live on through this show.”

Through the use of personal letters and oral histories from the museum’s vast collection, Expressions of America offers a glimse into life for Americans, both those serving overseas and those at home.

Among those featured are Maj. Birdie Daigle, a U.S. Army Nurse from 1941-1946; 1st Lt. Shanon Estill, an Army Air Corps pilot who was shot down in April 1945; his remains were no recovered from the crash site until 2005, thanks to the efforts of his daughter, Dr. Shaon Estill Taylor, who now serves on the museum board of directors; and Edward A. Carter Jr., who answered a call for Black soldiers to reinforce infantry at the Battle of the Bulge. In March 1945, Carter killed six German soldiers and captured two more, despite being seriously wounded. He was posthumously awarded the Medal of Honor in 1997 after a review board determined he had been unjustly been denied the honor decades earlier.

Prior to the 25-minute projection show in the outer museum campus, guests are treated to a custom exhibit featuring the importance of war correspondence (at its peak, the U.S. military mail service was handling 20 million pieces of mail per week), food and drinks and live pre-show entertainment prior to the start of Expressions of America.

During Wednesday night’s media and VIP showing, museum president/CEO Stephen Watson noted Expressions of America had been five years in the making.

“It took us less time to win the war than to complete Expressions of America,” Watson said, drawing laughter from the audience.

“This innovative experience provides an exciting and relevant way for the Museum to connect with audiences of all ages and advance our educational mission,” he said. “As audiences experience the war through the thoughts and feelings of those who experienced it firsthand, they will better understand the WWII generation’s emotional journey to defeat tyranny and defend freedom throughout the world.”

Providing the soaring music for Expressions of America were New Orleans musicians, including members from legendary Preservation Hall Jazz Band, who put their own style to WWII-era music, in most cases with profound emotional effect.

According to the museum, Expressions of America was developed in partnership with Mousetrappe, an international leader in designing and producing media-based shows and experiences for museums, theme parks, expos, andcultural attractions.

Mousetrappe collaborated with Solomon Group — an award-winning entertainment design and production firm — on the technical design. Expressions of America utilizes world-class projection technology by Panasonic to share the museum’s mission with a wider audience in a larger-than-life environment.

After the media and VIP preview Wednesday night, Expressions of America opened to the public for the first time Thursday night, kicking off the museum’s annual Veterans Day commemoration. In addition to the premier of Expressions of America, weekend events will include the annual Victory Ball and a visit from 20 WWII veterans through the Gary Sinise Foundation’s Soaring Valor program. 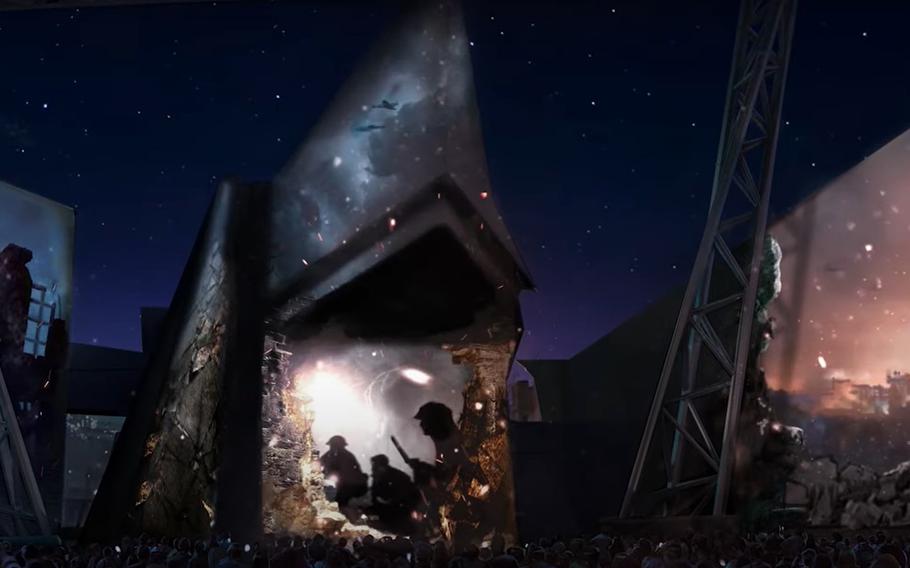