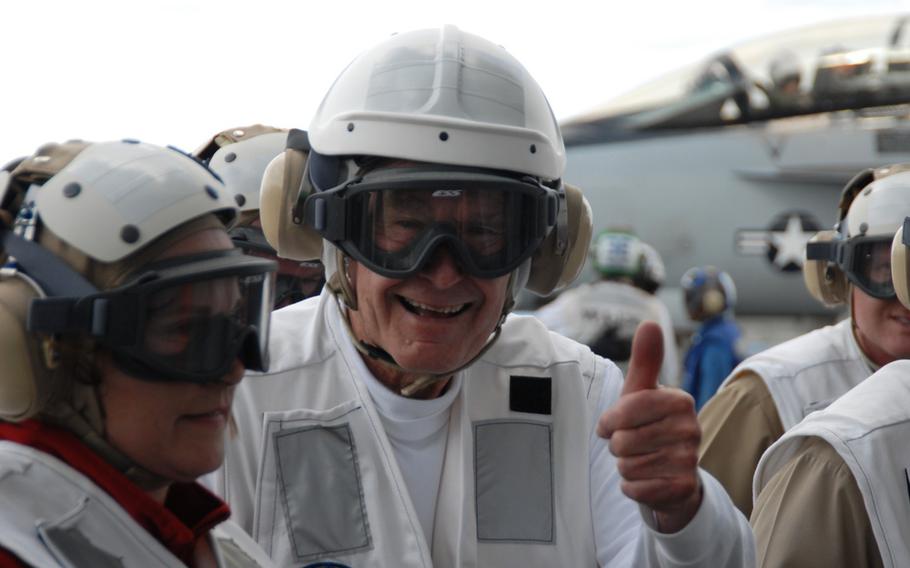 Former President George H.W. Bush, standing alongside his daughter Doro Bush Koch, gives a “thumbs-up” after watching aircraft catapult off and land on the flight deck of USS George H.W. Bush on May 26, 2009. (Michael Tackitt/U.S. Navy)

The man he called Gampy volunteered to be a Navy flyboy right out of high school, Pierce Bush explained. Among the youngest pilots, Lt. George H.W. Bush flew 58 combat missions and somehow survived the war, eventually becoming the 41st president of the United States.

Pierce Bush wrestled with his emotion as he addressed a gathering of dignitaries, including World War II veterans and Gov. John Bel Edwards, in a ceremony at the National WWII Museum, where the enormous aircraft display was christened the George H.W. Bush Aviation Gallery. A chubby blue aircraft called an Avenger, which hung from the ceiling above the audience, was the same sort of plane that George H.W. Bush flew.

The Avenger was a light bomber that carried a crew of three. In 1944, while attempting to eliminate a Japanese radio tower, George Bush’s Avenger, named the “The Barbara” for his future wife, was hit by anti-aircraft fire.

The future president managed to bail out and was eventually rescued by submarine. The other two airmen died. Pierce Bush said his grandfather thought about the two men who didn’t get out every day thereafter.

But the fragility of life wasn’t the only lesson the future world leader learned while at war. As an officer, George H.W. Bush was called upon to censor the mail sent home by the sailors on the aircraft carrier where he was stationed. In the performance of that task, the 20-year-old lieutenant became aware of the perspectives and values of Americans from various regions and stations. For a kid who’d grown up “in a bubble in Connecticut,” as Pierce Bush put it, it was a life-changing revelation.

He was “a young man born of privilege,” Pierce Bush said, “and it altered him for the rest of his life.”

Much later, as George H.W. Bush led the country during the fall of the Berlin Wall and the Gulf War, the president’s service certainly informed his decisions.

Pierce Bush, 36, is the son of Neil Bush, the brother of former President George W. Bush. He is CEO at Big Brothers Big Sisters Lone Star, a Texas-based organization that provides youth mentoring. He ran for Congress unsuccessfully in 2020.

George H.W. Bush, who died in 2018, was the last president to have served in World War II. From its start in 2000, he was a supporter of the D-Day Museum, which eventually became the National WWII Museum. The newly named George H.W. Bush Aviation Gallery, which includes six vintage aircraft, is housed in the cavernous US Freedom Pavilion: The Boeing Center, which has been part of the museum since 2013.

Gov. Edwards, who also served in the military, described George H.W. Bush as “a war hero and consummate public servant.” He congratulated the WWII Museum for providing Louisiana with a “truly world-class” attraction, and lauded Jeffery and Mindy Hildebrand of the Hildebrand Foundation for contributing $3 million to the newly named George H.W. Bush Aviation Gallery.

Edwards lent a contemporary context to the discussion of WWII when he gravely mentioned that the Russian invasion of Ukraine was the largest military conflict in Europe since 1945.

Apparently, the governor said, “we’re not smart enough” to learn from generations that have seen war. The swooping 150-foot awning over the WWII Museum, called “The Bollinger Canopy of Peace,” has recently been lit in Ukrainian colors