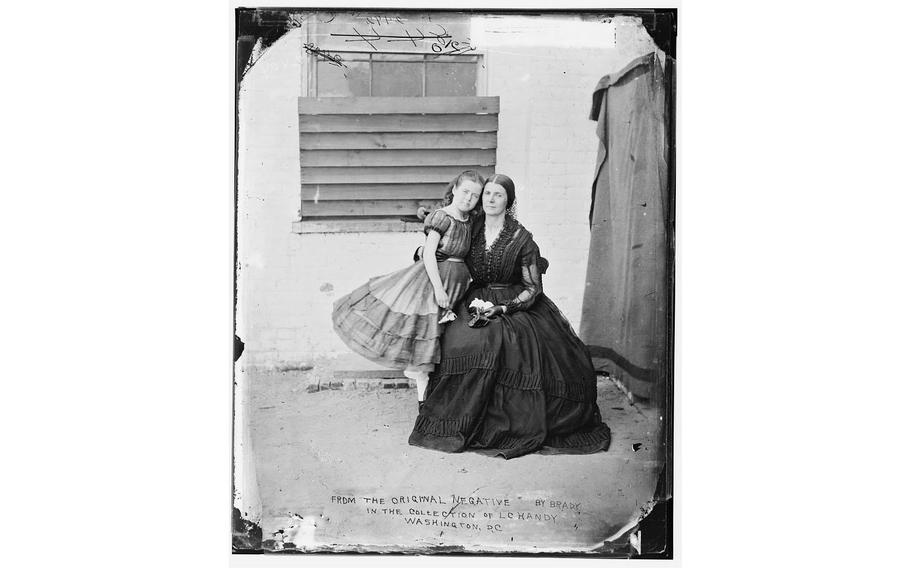 Rose Greenhow was held in the Old Capitol Prison in Washington with her 8-year-old daughter, “Little Rose,” during the Civil War after repeatedly being caught spying for the Confederacy. (Library of Congress)

Good luck visiting the Wall of Spies Experience in Bethesda, Md. The museum is housed inside the National Counterintelligence and Security Center headquarters, one of the most secure buildings in the country, and to get in, you kind of have to be a spy.

Far from an honor roll, the Wall of Spies names and shames more than 130 Americans who have betrayed the country. Their stories are right up the NCSC's alley, since it guards against insider espionage.

"It's a wall you don't want to end up on," Dean Boyd, chief spokesman for the agency, said in a recent phone interview.

Because it is closed to the public, the NCSC has slowly been bringing the museum online for all to see. Its newest exhibit, which went live last week, focuses on spies during the American Civil War.

There was Thomas Nelson Conrad, a Methodist preacher from Virginia who used his chaplain garb to cross into Washington, D.C., and collect information on Union troop movements. His reports helped Confederate Gen. Robert E. Lee trounce the Union in the Battle of Fredericksburg in 1862. Conrad was arrested three times during the war; twice he was let go, and once he escaped.

Many Confederate spies were women. One of the most famous was Rose Greenhow, a wealthy widow and socialite who lived across from the White House. She organized a spy ring that relayed information via ciphers, Morse code and messages sewn into secret pockets and tapestries.

Even after she was caught and placed under house arrest, Greenhow continued to spy, even using her 8-year-old daughter to transmit messages on candy wrappers. In 1862, both of them were held for several months in the Old Capitol Prison before being deported to the Confederate capital of Richmond. She toured Europe to gin up support for the Confederacy, and while returning by ship, she drowned off the coast of North Carolina. The weight of the gold sewn into her dress dragged her underwater.

Younger women also became Confederate spies, like Belle Boyd, who at 17 began flirting with Union soldiers staying at her family's hotel in Front Royal, Va. When she got useful information from these soldiers, she passed it on to Confederate Gen. Thomas "Stonewall" Jackson. Boyd was repeatedly arrested and let go until she was deported to Richmond. When she attempted to escape to England in 1864, her ship was captured by the Navy. While trying to charm one of her captors, naval officer Samuel Wylde Hardinge, she instead fell in love; they married a few months later.

There was a similar story with one of the brothers who founded the Willard Hotel in D.C., Joseph C. Willard. While serving in the Union Army during the Civil War, he met and fell in love with Antonia Ford, who was soon arrested as a Confederate spy. It took Willard months to convince her to take an oath of allegiance to the United States, during which time he secured a divorce from his first wife. Willard and Ford married a week later.

Most Americans caught spying for other nations have been punished harshly — think Julius and Ethel Rosenberg (executed) or Aldrich Ames (life sentence) — but a lot of Confederate spies escaped justice. After the war, Conrad, the preacher spy, became an English professor and eventually president of the college that became Virginia Tech.

And consider the story of Benjamin Franklin "Frank" Stringfellow, a Confederate spy who used disguises to gain access to Union secrets, including intelligence that aided Lee's victory at the Second Battle of Bull Run. Stringfellow spent a little time in Canada after the war but returned to the United States in 1867. He married and became an Episcopal priest.

Stringfellow wrote a letter to President Ulysses S. Grant to let him know that he was once so close to the general during the Civil War that he could have shot him dead but didn't — Grant was apparently so grateful he told Stringfellow to let him know if he ever needed a president's help. Decades later, at age 57, Stringfellow wrote to President William McKinley and referred to Grant's alleged offer, asking to be allowed to become an Army chaplain for the force on which he once spied. His wish was granted.