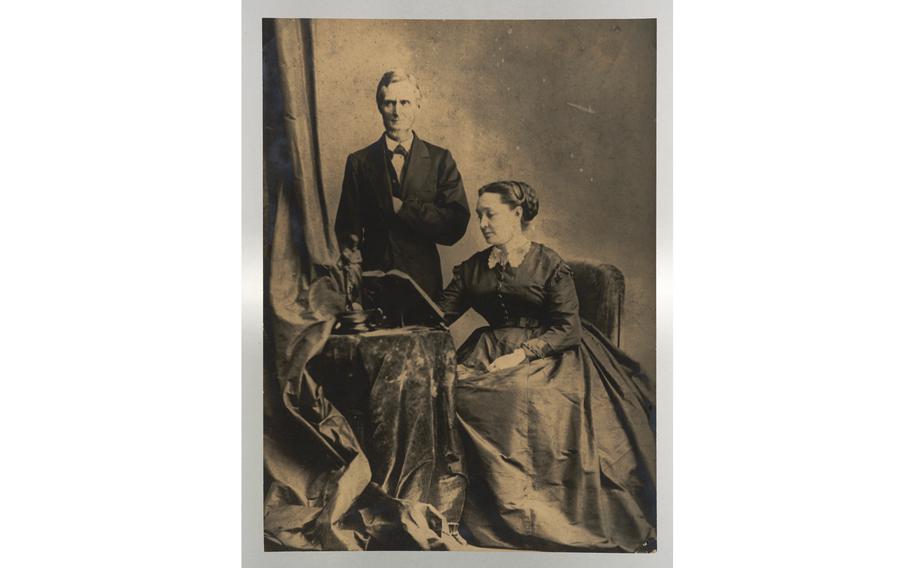 Jefferson and Varina Davis in 1867 or 1868. (American Civil War Museum, under the management of Virginia Museum of History & Culture)

The little Black boy in the Civil War-era photograph stands atop a gilded chair, grasping its tall back with his small fist. His clothing is quotidian — striped pants and a matching long-sleeved top with a rounded white collar. His face is framed by soft, dark curls; his eyes are very somber, some might say sad.

Is he simply tired of posing for the camera, or does his expression speak to something more painful? And what should be made of the inscription on the back, in the hand of Varina Davis, the wife of Confederate President Jefferson Davis?

“James Henry Brooks adopted by Mrs. Jefferson Davis during the War and taken from her after our capture. A great pet in the family and known as Jim Limber.”

Aside from the image and slight descriptions in letters and memoirs, there is little documentation about the life of Jim Limber, who was brought as a child of 7 or 8 to live with the Davises in Richmond during the last year of the Civil War. He vanished from history not long after, frozen in time as the winsome little boy of the fancy photograph.

Yet perhaps because of this very void, his brief relationship with the Davis family has been the focus of Confederate mythologizing for generations.

The American Civil War Museum, which includes the ambrotype of Jim Limber in its collection, avoids mentioning the orphan on quick tours, lest it encourage simplistic and self-serving interpretations, said Kelly Hancock, the Richmond museum’s public programs manager.

The relationship between the Black boy and the Confederate family has been used, in particular, by promoters of the Lost Cause ideology, which falsely asserts that the war was fought over states’ rights, not slavery, Hancock said. In this pseudohistorical narrative, with roots in enslavers’ views of themselves, Black people were faithful, childlike servants guided paternalistically by benevolent masters.

“They say, ‘Look at Jefferson Davis. He was willing to adopt a Black boy. So how can you say the war had anything to do with slavery or racial equality?’ “ 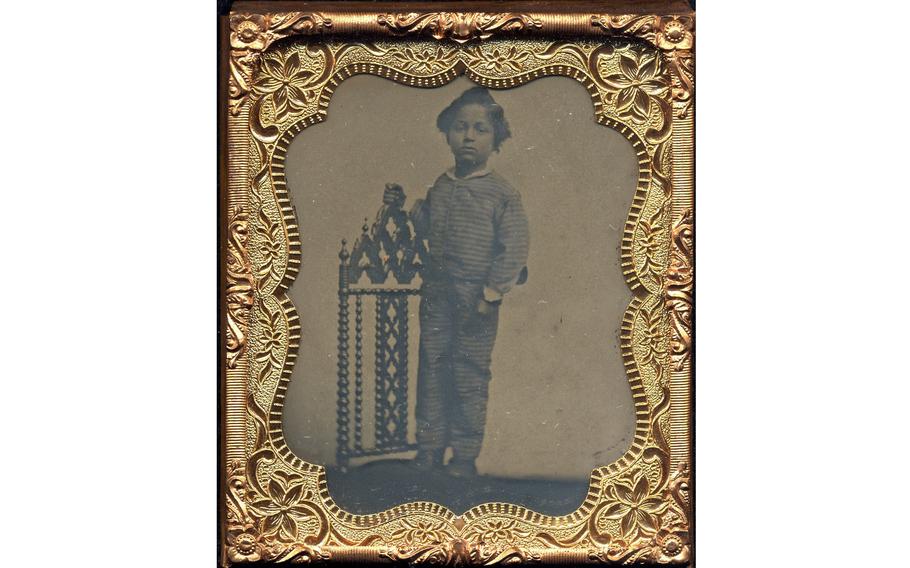 Jim Limber, also known as James Henry Brooks, was a Black boy who lived with Jefferson Davis, his wife, Varina, and their children in Richmond during the last year of the Civil War. (The American Civil War Museum, Richmond, Va.)

Varina Davis was running errands in her carriage in mid-February 1864 when she witnessed the young Jim Limber being beaten by a Black woman, according to one account. Or, so goes another, she came upon the abuse in the home of the boy, a street playmate of her children. His mother, a free woman, had died and left him in another’s care. In both versions, Varina valiantly steps in and rescues the child.

“He was dressed up in little Joe’s clothes and happy as a lord,” Chesnut wrote. “He was very anxious to show me his wounds and bruises, but I fled.”

The boy, who called himself “Jim Limber” when in everyday clothes and “James Henry Brooks” in his Sunday best, quickly became an energetic playmate for the Davis children — Margaret, then 8, Jefferson Jr., 7, Joseph, 4, and William, 3, Varina wrote in a footnote in the 1890 memoir she penned on her husband’s behalf. (The youngest, Varina Anne, known as “Winnie,” was born in June 1864, two months after Joseph died in a fall.)

Jim was “a fearless ally” of the “Hill Cats,” the elite boy crew to which the Davis sons belonged, joining in their scuffles with the working-class “Butcher Cats,” Varina said in her footnotes.

Letters between members of the Davis family appear to affirm that Jim was regarded with affection — Varina’s “pet Negro,” according to the account of a family friend.

With Union forces closing in, Varina brought Jim along with her children as she fled Richmond southward in late March 1865. (By contrast, Varina’s enslaved personal maid and nurse to the children, Ellen Barnes, was forced to leave her own daughter behind, Hancock noted.)

On April 19, 1865, Varina wrote Jefferson that the children “are well and very happy — play all day — Billy & Jim fast friends as ever.” In another missive nine days later, she related that “Limber is thriving but bad.”

By then, Richmond had been evacuated, the Union Army had set the Confederate capital aflame, and Davis had hit the road behind her, catching up with the rest of the family in Irwinville, Ga.

The reunion was short-lived. A few days later, on May 10, the U.S. Calvary descended and, despite Jefferson’s attempt to slip away wearing his wife’s black shawl, the entire clan was captured.

After the prized prisoners reached the South Carolina coast on a river boat, the Davises turned Jim over to the care of a Union officer they knew, Gen. Rufus Saxton, according to Varina’s footnotes. “Believing that he was going on board [the tugboat] to see something and return, he quietly went, but as soon as he found he was going to leave us he fought like a little tiger and was thus engaged the last we saw him.”

In her early 1890s memoir, “First Days Among the Contrabands,” Elizabeth Hyde Botume, a Boston woman who taught freed Blacks in the South Carolina Sea Islands, offered a last glimpse of Jim.

He was “small for his age; he was a very light mulatto, with brown curly hair, thick lips and a defiant nose,” she wrote. “As he was the constant companion and playmate of Mrs. Davis’s children, he considered himself as one of them, adopting their views and sharing their prejudices.”

Saxton entrusted the teachers at the Freedmen’s Aid Society with Jim’s care, and they soon sent him North for more schooling and placed him in the home of a Northern woman “where he was well-trained in all ways ... until he was old enough to support himself,” Botume said.

What became of him as an adult isn’t clear.

More than a century later, Jim Limber’s story still captures the collective imagination — as the subject of songs, children’s books, poetry and Charles Frazier’s 2018 novel “Varina,” in which a middle-age Limber reunites with the Confederate first lady in Sarasota Springs, N.Y. 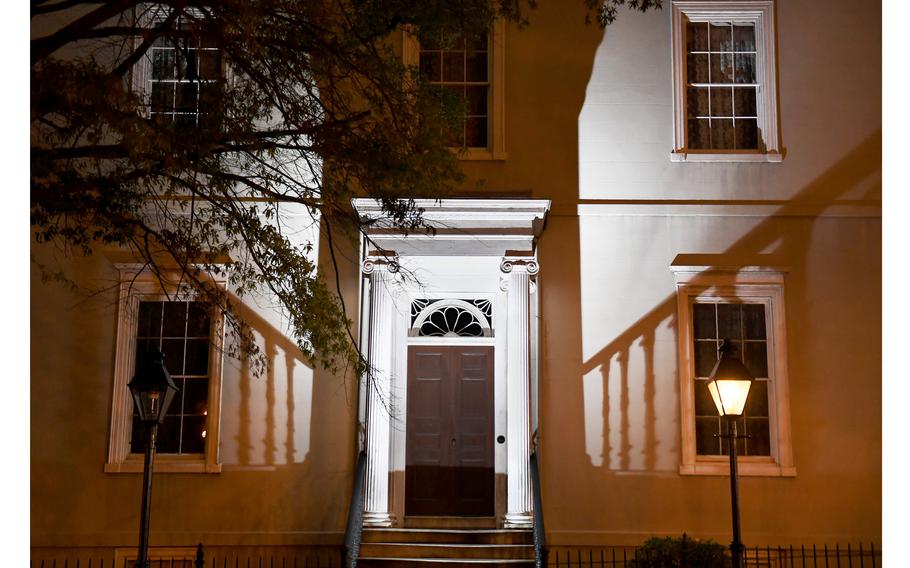 A flash illuminates the outside of the White House of the Confederacy in Richmond, Va., where Jim Limber lived during the final year of the Civil War. (Matt McClain/The Washington Post)

In 2008, the Sons of Confederate Veterans, a fierce defender of the Lost Cause narrative since its founding in 1896, made an audacious bid for public attention.

After promoting the widely debunked idea that large numbers of Black Confederate soldiers served in the war, the group expanded its thesis “to include stories that portrayed Confederate leaders as progressive in their racial outlook,” wrote historian Kevin M. Levin in “Searching for Black Confederates.”

Jim Limber’s story was made to fit the mold, said Levin, who has written extensively about the Black child’s time with the Davises.

The SCV, which has played a role in erecting and protecting Confederate statues throughout its existence, spent $100,000 to commission a life-size, bronze statue of a fatherly Jefferson Davis, protectively touching his son Joseph and little Jim Limber. The group offered the sculpture for placement at the Tredegar Iron Works, which is also home to the civil war museum in Richmond, to commemorate the bicentennial of Jefferson’s birth. Members hoped it would serve as a visual counterpoint to a statue of Abraham Lincoln and his son Tad erected there in 2003.

The proposed inscription read, in part, that Jim “was a black youth that the Davises rescued from maltreatment and raised as their own” before he was cruelly wrested away by Union forces.

In the end, the museum agreed to accept the donation, with a caveat: It could not guarantee where or whether the statue would be displayed or how it would be interpreted.

The SCV, unwilling to yield control, rescinded the offer. The statue was installed, instead, on the lawn of Beauvoir, the Jefferson Davis home and library in Biloxi, Miss., owned and operated since 1903 by the Mississippi division of the Sons of Confederate Veterans.

But just like the photograph of a grave-looking Jim Limber, the sculpture invites more questions than it answers. Which part of Varina’s inscription on the photo was true: Had the boy been “adopted” by the Davises or was he more the family “pet?” What was his life like in the Davis mansion?

There was no adoption law in Virginia at the time, historians note. In her memoir footnotes, Varina did not mention adoption, stating instead that Jefferson had registered free papers for Jim to protect him “against getting into the power of the oppressor again” — presumably another abusive Black person. Yet no such records appear to have survived Richmond’s burning.

And what about Jim as entertaining playmate to the Davis children? It was not uncommon in the antebellum South for young Black and White children to play together, although Black children were often the brunt of the jokes and the victims of abuse, said Hilary Green, associate professor of history at the University of Alabama and an expert in the Civil War era.

By no later than age 10, White and Black children were well aware of the racial hierarchy and their place in it. She suggests that Jim might have been brought into the household to be groomed over time as a valet for one of the Davis sons, as Jupiter was to Thomas Jefferson, a typical practice in slaveholding White households. Black household servants who were close to the children were often compelled to sit for expensive ambrotype photographic portraits, as Jim had done. It’s unknown where Jim slept and ate — with the enslaved people or with the family? What did he do when he wasn’t playing?

And what of the affection the Davises seemed to show their small Black charge?

Even if it’s true that Jefferson Davis and his family were good to Jim, “he was the president of the Confederacy, a separate nation that formed to protect and reinforce white supremacy and slavery,” said Holly A. Pinheiro Jr., assistant professor of African American history at Furman University in Greenville, S.C. “One good act would not absolve him from being a slave owner and defending slavery to the end.”

If the Davises considered Jim a member of the family, “Why didn’t they bring him with them? Why did they leave him behind?” Pinheiro Jr. asked.

Despite the Confederate myth that Jefferson kept searching for Jim, historians note that there is no evidence to that effect in his or Varina’s voluminous writings.

Pinheiro Jr. raises another question that appears unaddressed in the historical accounts.

“Let’s keep it real,” he said. “Jefferson Davis was so discussed and well-known that it wouldn’t have been difficult for Jim, if he wanted to, to go find him.” He imagines that the somber-faced little boy in the photo may have gotten a taste of freedom up North and never looked back.