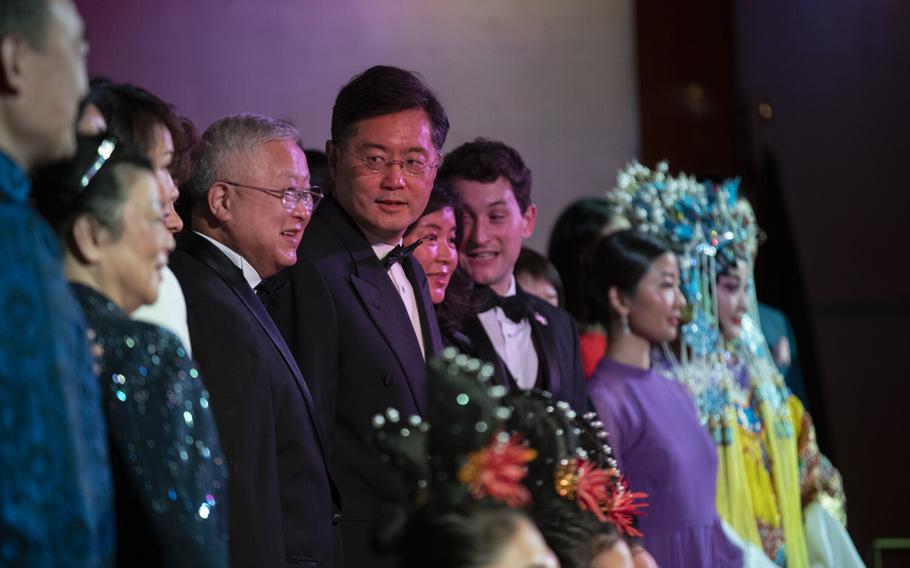 Fifty years ago, President Nixon landed in Beijing in a historic visit to China that opened the door to diplomatic relations between the two countries, shifting the power dynamics of the Cold War and undermining the Soviet Union’s global influence.

The eight-day visit laid the groundwork for a relationship that would aid in China’s economic opening-up to the world, bringing it from an impoverished, isolated nation to a global superpower ready to challenge the United States.

On Thursday, with the U.S.- China relationship frayed and global diplomacy faltering in the face of Russia’s invasion of Ukraine, Chinese Ambassador Qin Gang marked the anniversary of this trip with a visit to the Richard Nixon Presidential Library and Museum in Yorba Linda.

“The two leaders, with a masterly grasp of the shifting international landscape, put the interest of their nations and their peoples before the differences in ideology and the political system, and over two decades of antagonism and hostility, and opened the gate of U.S.- China relations,” Qin said in a speech.

The ambassador was joined by 300 political, community and business leaders from the Chinese American community in Southern California.

At the time of Nixon’s overtures, Roy noted, China was in the midst of a tumultuous Cultural Revolution marked by political instability, violence and chaos. Nixon’s arrival marked the first time a U.S. president had set foot in China since the Communist Party formed the People’s Republic of China in 1949 and followed more than 20 years of almost no contact between the two countries.

“On the surface, conditions in China did not seem right for a major diplomatic initiative by the United States,” Roy said. “Yet President Nixon and Chairman Mao [Zedong] had the wisdom and courage to break through the wall of hostility and set their two countries on a new and more beneficial path to the future.”

In 1972, a shared antipathy toward the Soviet Union drew the U.S. and China together. Nixon was also eager to extricate the U.S. from the costly Vietnam War, and Chinese leader Mao sought recognition over Taiwan at a time when much of the globe was still split over which government to recognize, more than two decades after the Communist victory in the Chinese civil war.

Chao said Nixon’s visit, while important geopolitically, was also deeply personal for many Chinese Americans and symbolized the “reunification of families.” Her father left China in 1949 and could not return to see his mother for 24 years. His father died before he had a chance to go back.

But the 50-year milestone comes at a low point in U.S.- China relations.

Under President Xi Jinping, an increasingly nationalistic and self-assured China has denounced what it sees as American interference in its affairs and region, and many in the U.S. have come to view China as a growing economic and military threat.

On Wednesday, hours before the Russian invasion of Ukraine began in full force, a spokeswoman for China’s Foreign Ministry said the United States was the “culprit” behind the problems in Eastern Europe, accusing the U.S. of “heightening tensions, creating panic and even hyping up the possibility of warfare.”

The tension has grown in recent years, stoked by the Trump administration, which labeled China a “strategic competitor,” placed tariffs on $370 billion worth of Chinese goods, sanctioned officials and targeted Chinese tech companies such as Huawei and WeChat.

China, in turn, has engaged in so-called wolf warrior diplomacy, lashing out at any form of criticism verbally or through social media.

The U.S. has protested what it believes are unfair economic practices by Beijing and condemned the country’s crackdown on Hong Kong and treatment of Uyghur Muslims in Xinjiang. Ahead of the Beijing Olympics, Washington announced a diplomatic boycott of the international gathering in protest of China’s human rights record.

Last March, high-level talks between the two countries in Anchorage began with a fiery exchange of accusations in which Secretary of State Antony J. Blinken lambasted China for violating international norms and China responded at length opposing U.S. interference in the country’s internal affairs.

And while Nixon and Mao essentially agreed to kick the can down the road in regard to the question of Taiwan back in 1972, the self-governing island continues to be a potential conflict area. This year, Qin described it as the “biggest tinderbox” between the two sides and said support of Taiwanese independence would likely result in military conflict.

Qin again drew the line in the sand Thursday night, calling the “One China” principle an “unshakeable foundation” for China- U.S. relations and a “red line that cannot be crossed.”

Even with the future of diplomatic relations up in the air, Qin noted that talks succeeded in the first place because of common interests and a common enemy, which he said still exist today.

The ambassador pointed out the extensive cultural and economic exchange between the U.S. and China — billions of dollars of annual trade and the subsequent jobs formed, more than 70,000 American companies investing in China, relationships between sister provinces and cities, and the hundreds of thousands of Chinese students studying in the U.S.

“As the world’s two largest economies and two current members of the U.N. Security Council, it is simply impossible for China and the U.S. to stay in confrontation, hostility or estrangement,” Qin said. “Because any of this will cause unbearable damage to both countries and the world.”