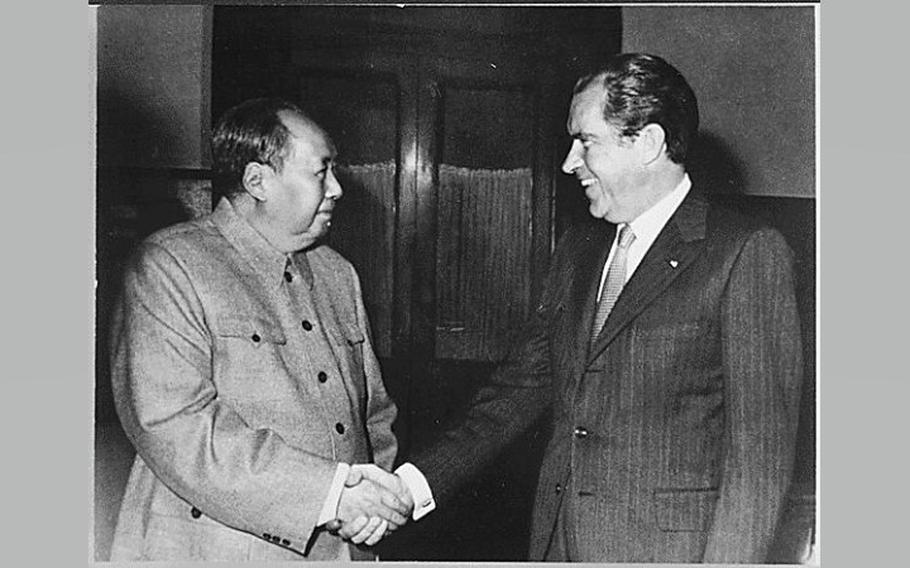 Chinese dictator Mao Zedong woke up early and got a shave and a haircut for the first time in months. He put on a crisp new suit and new shoes specially made for the occasion. He sat down in an armchair in the study of his home, a porcelain spittoon on the floor nearby.

Not far away, President Richard M. Nixon rested in a guesthouse, making notes on a legal pad. He wore a dress shirt with cuff links. He had just arrived in Beijing for a visit that had shocked the world. He hoped to meet Mao but was not certain when, or if, the Chinese leader would see him.

Suddenly, the word came, as if from an emperor, aides remembered: Mao would see Nixon. Immediately.

It was Feb. 21, 1972, and as stunned observers looked on, the hard-line, anti-communist president was taken away in a black limousine to meet the ruthless champion of global revolution.

The meeting between the two arch foes, 50 years ago Monday, and Nixon’s week-long visit to “Red China,” were earthshaking, the historian Margaret MacMillan wrote in her 2006 book “Nixon in China.”

Back then, it was inconceivable that China would one day be hosting the international spectacle of the Winter Olympics.

Winston Lord, a young American diplomat who was on the trip and present for the meeting with Mao, wrote later: “I run out of adjectives in describing its drama.”

“If Mr. Nixon had revealed he was going to the moon he could not have flabbergasted his world audience more,” The Washington Post had said in an editorial. “It is very nearly mind blowing.”

All the top American journalists were there — newspaper reporters from The Post and the New York Times, famous network anchormen including Walter Cronkite, who had took along electrically heated socks to ward off the cold of northern China.

The Pulitzer Prize-winning author James A. Michener was there. Future TV news superstar Barbara Walters was one of only three women in the media group, according to MacMillan.

Nixon’s national security adviser, Henry Kissinger, who had secretly helped arrange the visit, was a key figure there.

So was Nixon’s White House chief of staff, H.R. Haldeman, who meticulously stage-managed events but would be disgraced along with Nixon in the Watergate scandal, which began to unfold four months later.

To impress the Americans, the Chinese set up fake outdoor scenes of picnickers with transistor radios. But after the VIPs had moved on, officials went around and collected all the radios, MacMillan wrote. And the picnickers were taken away on trucks, ABC’s Ted Koppel said later.

The trip was a blockbuster of a story, especially for television, which beamed back images of a country that had been hidden from the world for almost a quarter-century.

And it constituted a massive thaw in the Cold War.

The president asked for the release of a CIA agent, John T. Downey, who had been taken prisoner 20 years before when his plane was shot down during the Korean War. Downey was freed the next year.

The Nixons went to the Great Wall, and the president said that only a great people could have constructed it.

There were toasts and banquets. Nixon had practiced using chopsticks. (One set he used was later filched as a souvenir by a Canadian reporter.)

China had been hostile and closed to the West for 23 years, exporting radical ideology even as it seethed internally.

“People of the world,” Mao had declared in 1964, “unite and defeat the U.S. aggressors and all their running dogs!”

“Monsters of all kinds shall be destroyed,” he said.

No American president had ever been to China. The United States refused to recognize the country’s communist government. There were few diplomatic contacts and scant business ties.

China “was the darkest, most mysterious part of the Communist empire,” Nixon aide Dwight Chapin, recalled.

Nixon had accused China of spreading “insurrection, rebellion and subversion in every free country in Asia.”

“What do the Chinese Communists want?” he had asked. “They want the world.”

But now both sides wanted to talk.

Both feared the Soviet Union — the polar bear, as the Chinese called it. Chinese and Soviet troops had fought a nasty border skirmish along the remote Ussuri River in 1969.

Since the end of World War II in 1945, much of the world had been locked in the titanic “Cold War” between Western democracies, led by the United States, and communist dictatorships, led by Soviet Russia and later China.

There had been crisis after crisis, the war in Korea in the 1950s between the United States and South Korea and their allies against North Korea and China and their Soviet allies.

In 1972, the United States remained entangled in Vietnam, where 50,000 U.S. service members already had given their lives.

China, for its part, had undergone decades of famine and internal upheaval after Mao seized control in 1949 and imposed his draconian economic and cultural policies.

And the bloody upheaval of his Cultural Revolution of the 1960s may have killed a million more, historians believe.

By the winter of 1972, “Chairman Mao” was an aging cult figure. He had a bad heart, a chronic cough and had just gotten over pneumonia. And he ruled a vast but backward authoritarian state of 800 million people.

A successful early meeting with Nixon would benefit both men.

After getting off Air Force One, Nixon had greeted Zhou, the Chinese premier, with a hearty handshake.

The Americans knew that in 1954, Secretary of State John Foster Dulles had refused to shake Zhou’s hand at a conference in Geneva. And they knew the Chinese had not forgotten.

“Your handshake came over the vastest ocean in the world,” Zhou told Nixon as they rode to the guest quarters that Tuesday. On arrival, the Chinese gave the Americans lunch and then let them relax. There was to be a banquet that night.

But a short time later, Zhou was back. Mao wanted to see Nixon right away.

“I went and got the president,” Nixon aide Chapin said in an interview. Nixon changed out of a blue sport coat and into his suit coat. (Chapin, now 80, also was caught up in Watergate, and served several months in prison for lying to a grand jury.)

Nixon summoned Kissinger. Kissinger summoned his aide, Winston Lord, who had done much of the research and preparation for the visit and had been on Kissinger’s secret trip to China the previous July.

Lord, now 83, said in an interview that Kissinger also wanted him along because he was a superb note taker — a skill that would allow Kissinger to concentrate on the meeting.

Nixon was pleased that Mao wanted to see him so soon. He, Kissinger, Lord, Secret Service agent Bob Taylor, and Zhou piled into a black Chinese car and headed for the compound where Mao lived.

“They are off to the races, and we have no idea where they are,” Chapin recalled. The staff decided not to say anything publicly, “because we couldn’t answer the questions: Where are they, or who’s with him.”

“We had to wait for him to get back before they could put out the news of what happened,” Chapin said.

Arriving at Mao’s modest home a few miles away, the Americans noticed a ping-pong table in the hallway. (The sport was a Chinese national pastime, and a team of U.S. players had created a sensation when they had visited China the year before.)

In the study, a female aide supported Mao by the arm as he stood up to shake Nixon’s hand. The group sat in a semicircle, in armchairs that had fringed slip covers.

“We were used to the elegant presentations, sometimes fairly lengthy, by Zhou Enlai,” Lord said. “So Kissinger and I were somewhat taken aback by Mao’s style. He spoke in brief sentences. He was bantering. He was self-deprecating. He kept deflecting substantive questions.”

His speech was also slurred, and he spoke with a heavy accent from Hunan, his home province in southern China, MacMillan wrote. The Americans thought he’d had a stroke.

The meeting, scheduled for 15 minutes, went on over an hour. Nixon tried to talk about Vietnam, Taiwan and Korea.

Mao called them “troublesome issues” that he would rather not discuss, according to Lord’s notes.

“I discuss the philosophical questions,” he said.

Nixon spoke of Mao’s writings, saying they “moved a nation and have changed the world.”

Mao, whose “Little Red Book” of quotations was waved by fanatics across China, said: “Those writings of mine aren’t anything. There is nothing instructive in what I wrote.”

He said: “I like rightists. People say you are rightists, that the Republican Party is to the right.”

Nixon replied: “In America, at least at this time, those on the right can do what those on the left talk about.”

“Over a period of years my position with regard to the People’s Republic was one that the Chairman ... totally disagreed with,” Nixon said. “What brings us together is a recognition of a new situation in the world.”

The general tone was cordial, if lacking in substance, and Nixon was delighted.

At the end of what Nixon called “the week that changed the world,” the two sides issued a communique stating their conflicting positions, agreeing to disagree.

But the United States got the Chinese to nudge the Vietnamese communists, MacMillan wrote.

The Soviets, rattled by the visit, became suddenly more agreeable.

And China got its lofty place on the world stage.

Fifty years later, though, Taiwan remains a flash point, as the United States has maintained close ties with the island, to the anger of the Chinese, who insist it is still part of China. And Russia is again a threatening presence in Europe.

After Nixon’s meeting with Mao, a group picture of the event ran on the front page of The Post and in newspapers across the country. But Lord had been cropped out of the shot.

“Lord was never at this meeting,” Lord said Nixon had ordered. “Cut him out of the … photos. His presence is to be kept secret.”

“That was for a good reason, actually, even though it hurt my ego,” he said.

Secretary of State William Rogers had not been invited to the meeting, and Nixon didn’t want to humiliate him further by showing that a young Kissinger aide had been, Lord said.

On a trip to China a few months later, he said, Zhou Enlai gave him a copy of the uncropped photo.