NAPLES, Italy — U.S. military installations in Italy likely will see little impact from the country’s latest effort to turn up the heat on unvaccinated people, mostly because of earlier Pentagon vaccination mandates for service members and civilians, officials said Monday.

A new Italian decree barring the unvaccinated from most public places goes into effect next Monday.

Aviano Air Base officials said they didn’t anticipate any COVID-19 policy changes, but they reminded community members that the new rules went into effect in the surrounding region Monday, a week sooner than the rest of Italy. 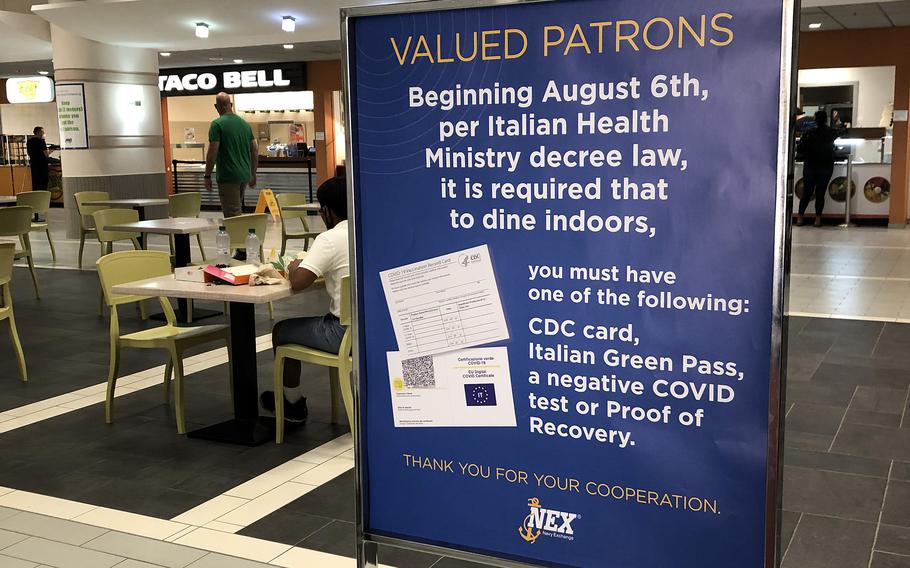 Buy Photo
Since July, Italy has increased restrictions to enter restaurants, bars, gyms, cinemas and other venues in an effort to encourage people to get vaccinated. Next week, tighter controls go into effect that allow only the vaccinated or people who can prove recovery from the virus entry into those establishments, effectively banning the unvaccinated from most public places. (Alison Bath/Stars and Stripes)

The rest of Italy remained in the white zone, according to the Italian Health Ministry.

“Currently, we have no plans to introduce stricter restrictions that exceed what we already have if it respects the local Italian decree,” said Lt. Drake Greer, a NAS Sigonella spokesman, noting that all active-duty service members are already required to be vaccinated.

Typically, U.S. bases in Italy have followed local, regional or national COVID-19 laws unless Defense Department or Centers for Disease Control and Prevention rules are tougher.

For example, the requirement for social distancing on U.S. bases is 6 feet, according to CDC recommendations. Italian health recommendations require just three feet.

While outdoor mask wearing isn't required in most circumstances in Italy, it is required at NSA Naples' Capodichino site in the main walkway during peak times, such as lunch.

The government in Rome last week passed some of the strictest measures yet against the unvaccinated, effectively banning them from most public venues, such as cafes, bars, cinemas and sporting venues. Buy Photo
A sign requiring masks at an Agip gas station near Aviano Air Base, Italy, Nov. 29, 2021. The sign has been up for those coming inside since last year, but new Friuli Venezia-Giuli restrictions meant customers filling up their cars outside also were required to wear masks. Those staying in their cars who were willing to pay more to have their gas pumped could still go maskless. (Kent Harris/Stars and Stripes)

Starting next Monday, only people who are vaccinated or who can prove recovery from the virus will be allowed entry into those establishments, Reuters reported. Previously, people with a negative COVID-19 test also could access those same venues.

Unvaccinated people will be able to go to the grocery store or use other essential services. They also can work if they can provide a negative COVID-19 test.

The new measure added buses and the metro to the list of public transportation requiring a green pass health certification or CDC white card. Italy already required the health certification for planes, long-distance trains, taxis, ferries and regional buses. The unvaccinated still will be able to use public transportation provided they have a negative test.

Italy reported 12,877 new COVID-19 cases and 90 deaths on Sunday, according to the Italian Health Ministry website. The ministry also reported that 84% of the population was fully vaccinated and nearly 6 million booster doses had been given.

Stars and Stripes reporters Kent Harris and Nancy Montgomery contributed to this report.