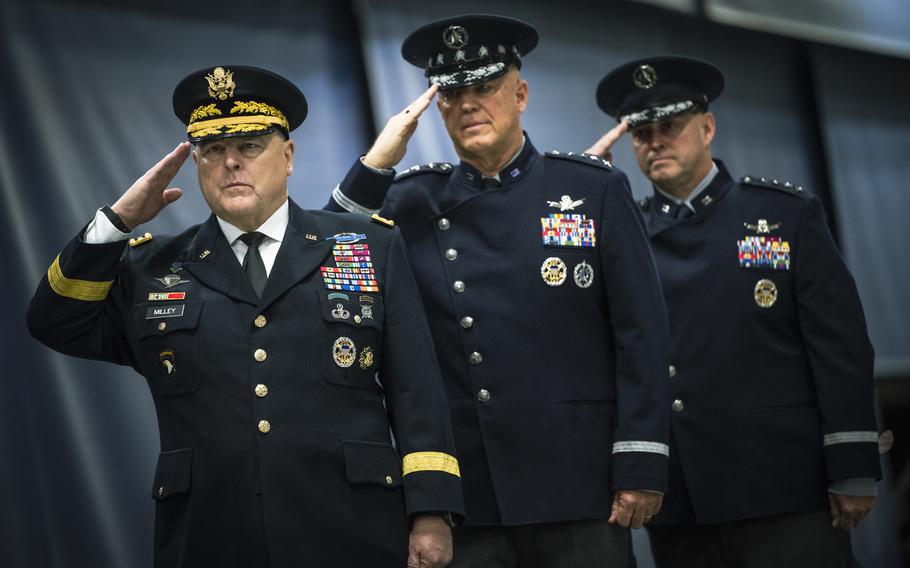 WASHINGTON — Gen. John “Jay” Raymond, the first guardian and chief of space operations for Space Force, formally retired Wednesday and passed the responsibility onto Lt. Gen. Bradley Saltzman during a ceremony that marked the end of nearly 40 years of service.

“Get ready. Because I’m going to need your best,” Saltzman told the crowd at Andrews Air Force Base, Md., and the thousands of Space Force guardians worldwide.

Saltzman called his ascension to operations chief of the Space Force a “truly humbling experience.”

“The world is becoming an increasingly dangerous place,” he said. “Without the space capabilities [we] are designing, building, protecting and operating, the joint force will not be able to complete its missions.

“If deterrence fails, the Space Force will be an indispensable component of our joint force at war.”

Raymond, 60, took over the Space Force after its founding in late 2019 after serving for 35 years in the Air Force, which included stints leading the Air Force Space Command and combatant commander of U.S. Space Command.

“It’s been the honor of a lifetime to serve as chief of space operations,” Raymond wrote in a tweet Wednesday.

“The Space Force is in great hands with Gen. Saltzman,” he added. “Be bold!”

As part of the transition ceremony, the Space Force chief of operations flag for the first time was symbolically passed from Raymond to Saltzman — a gesture that will be repeated in the future whenever the branch’s operations chief is succeeded by the next leader.

Raymond joined the Air Force in 1984 after graduating from Clemson University in South Carolina. From 1989 to 1993, he was an officer with the 1st Strategic Aerospace Division and executive officer of the 30th Space Wing at Vandenberg Air Force Base in California. He also spent time in Britain and Japan before he took over at Air Force Space Command in 2016.

When Raymond became the first chief of the new branch in December 2019, he also became its first member. He was tasked with several responsibilities, which included deciding what Space Force members would be called.

“He chose ‘guardians,’ and I think that’s absolutely the right name for this great force,” Austin said at Wednesday’s ceremony. “He did all of that and he made it look easy.”

Initially, Raymond opposed the creation of the Space Force but later changed his opinion and accepted an appointment to be its first chief of operations. He announced his retirement earlier this year, and President Joe Biden nominated Saltzman as his successor.

Saltzman, 53, was confirmed by the Senate as the new operations chief of the service about a month ago.

As the new chief of space operations, Saltzman becomes a member of the Joint Chiefs of Staff and the principal military adviser to the Air Force secretary for space defense matters. He is also a top military adviser to Biden, Austin and the National Security Council.

From 2020 until Wednesday, Saltzman served as deputy chief of space operations for cyber and nuclear, which is the Space Force’s chief operations officer. He graduated from Boston University and joined the Air Force in 1991. For years, he was a launch officer for land-based Minuteman III intercontinental ballistic missiles and a satellite officer for the National Reconnaissance Office.

Raymond was a strong supporter of his candidacy.

“Congratulations on your selection as the second chief of operations for the Space Force and a new member of the Joint Chiefs of Staff,” Vice President Kamala Harris said in a letter to Saltzman, which was read during the ceremony. “I look forward to working with you. The future guardian workforce will be shaped by your leadership.”

During Wednesday’s ceremony, Milley also thanked SpaceX founder and controversial billionaire Elon Musk, who was in attendance. Milley said Musk, who recently took control of Twitter, represents the “combination of civil and military cooperation that makes the United States the most powerful country in space.”