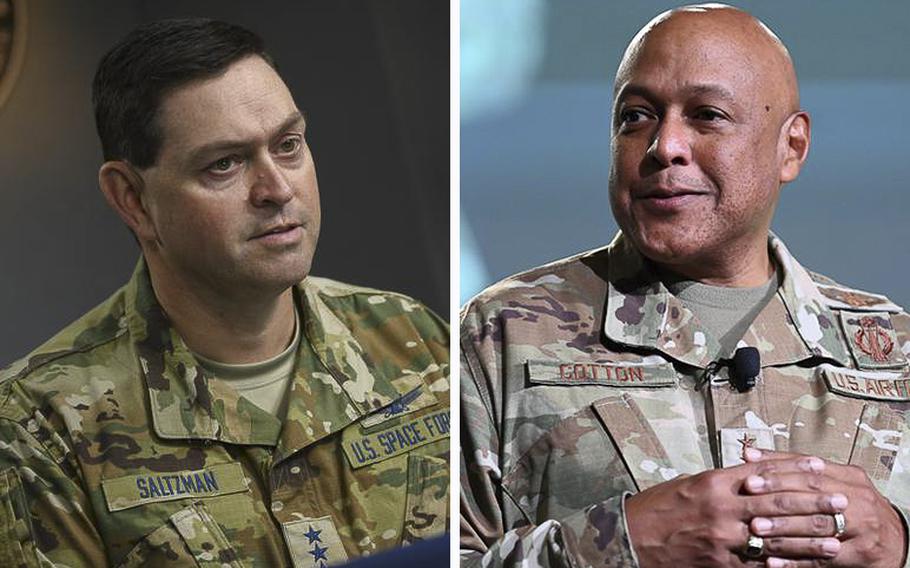 WASHINGTON — New commanders are slated to take the helm of the Space Force and U.S. Strategic Command following unanimous votes of approval by the Senate.

The Senate confirmed the leaders on Thursday ahead of an October recess.

Saltzman has served as the deputy chief of space operations for operations, cyber, and nuclear for the past two years. Space Force was established in 2019 to operate and defend military satellites and ground stations.

At Saltzman’s confirmation hearing, he called for a shift to more resilient space architecture to counter threats from China and Russia and said he would seek to recruit guardians with highly technical skills and give them robust training.

“If we have exquisite weapons systems, exquisite systems on orbit to provide joint capabilities but our guardians and our operators don’t have the skills, the training, the experience they need to make the most of their systems, then I feel like we’re not fully combat ready,” Saltzman told the Senate Armed Services Committee earlier this month.

The Space Force is expected to expand by 200 guardians in fiscal 2023, from 8,400 guardians to 8,600. Most service members are transferred from other military branches, as Saltzman was from the Air Force.

Saltzman in his new role will succeed Gen. John Raymond, who has led the service since its inception and will retire this year.

Cotton will take charge of STRATCOM after serving as deputy commander and commander of Air Force Global Strike Command, a position that he has held since 2021. He will replace Strategic Command’s outgoing chief, Navy Adm. Charles Richard.

During Cotton’s confirmation hearing, he said the U.S. needed to recalibrate its nuclear defense strategy to reflect the rising power of China, which has put the U.S. in three-way nuclear competition alongside Russia for the first time in history.

“We have seen the incredible expansiveness of what they’re doing with their nuclear force. … They have a bona fide triad now,” Cotton told senators this month. “We’re going to have to understand more deeply the Chinese nuclear strategy.”

As commander, Cotton said he would chiefly focus on deterrence and modernizing the U.S. nuclear triad, a nuclear force structure consisting of land-launched nuclear missiles, nuclear-missile-armed submarines and aircraft with nuclear bombs and missiles.

He said the U.S. needs to be a leader in preventing another nuclear arms race, though he cautioned the service members under his command would be ready to take any action, if necessary.

“The role that I would play as commander is to make sure that those 150,000 men and women that are supporting Strategic Command are prepared to do what some folks might think is the unthinkable,” he said.