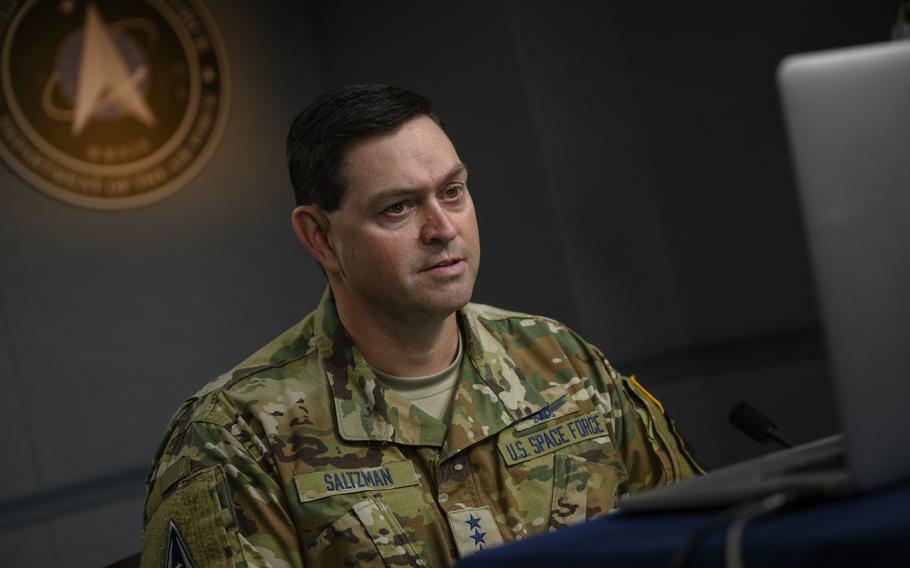 WASHINGTON — Competition from China and Russia is rapidly eroding the U.S. military’s dominance in space and the Space Force in its current form would struggle in a conflict with the two countries, the general nominated to lead the service told senators on Tuesday.

Lt. Gen. Bradley C. Saltzman said the U.S. remains “the greatest spacefaring nation on the planet” and for now can resist the attack capabilities wielded by its two closest adversaries but it has not designed systems to operate at a crisis level.

“We need to change to a more defendable architecture to account for the fact that space has shifted from a benign environment to a more contested warfighting domain,” he said.

Saltzman repeatedly told the Senate Armed Services Committee that he was worried about the pace of advancement by China and to a lesser degree, Russia. The committee is vetting his promotion from deputy chief of space operations to chief, replacing retiring Gen. John Raymond.

“They have invested heavily in the ability to destroy – not just disrupt and degrade – but destroy our space capabilities,” Saltzman said of China and Russia. “I don’t see anybody more dangerous, more committed to attacking U.S. interests in those areas.”

Sen. Jim Inhofe of Oklahoma, the committee’s top Republican, singled out the threat of China in particular, and he said the U.S. had slipped from its standing as the “unquestioned leader in space” to merely one of two peers in the span of a decade.

“Most people don’t realize that,” he said.

Saltzman called for a shift to more resilient space architecture, including proliferated constellations made up of many satellites in low orbits rather than a single, large satellite that is more vulnerable to attack.

The Space Force is taking notes on how such an architecture has aided Ukraine’s resistance to Russia’s invasion, he said, noting some of the constellations that Ukraine is using have shown resiliency to degradation attempts.

The military’s newest branch, established in 2019 as the world’s only independent space force, can improve in other areas as well, Saltzman said. It lacks simulators to allow operators to practice against thinking adversaries and does not have training ranges for routine practice, he said.

The Space Force is also not capable now of linking multiple units together to practice operating as a large force.

“If we have exquisite weapons systems, exquisite systems on orbit to provide joint capabilities but our guardians and our operators don’t have the skills, the training, the experience they need to make the most of their systems, then I feel like we’re not fully combat ready,” Saltzman said.

The end strength of the Space Force is expected to grow from 8,400 guardians to 8,600 in fiscal 2023, according to the White House’s budget request. The Senate’s version of the 2023 National Defense Authorization Act, which outlines priorities for the Pentagon and has yet to be voted on, also calls for an increase of 200 guardians.

Recruiting or commissioning them is not expected to be a challenge. The Space Force is not facing the recruiting difficulties plaguing other services and has more volunteers than it can accept, Saltzman said.

However, if confirmed, he said he would more broadly loosen enlistment standards to account for the highly technical skills needed for service. Only 23% of 17- to 24-year-old Americans are fully qualified to serve in the military, according to the Pentagon.

“We have an advantage by being small that we can consider on a case-by-case basis the right kinds of people with the right skill sets and the right diversity of thought to optimize our capabilities,” Saltzman said. “I think we don’t have to put blanket restrictions on types of people, types of qualifications, we have a tremendous opportunity to be more individualistic.”

Retainment is likely to be more of a problem than recruitment as the private sector offers more opportunities and higher salaries, he said. Creating the right organizational structure for the Space Force, including the possibility of establishing a Space National Guard, as well as provide flexible career paths for guardians, are issues that he would work to develop, Saltzman said.

Committee Chairman Jack Reed, D-R.I., said creating a culture within the service as a war-fighting force will be one of Saltzman’s greatest challenges. Saltzman told senators that he was committed to getting it right.

“It is one of my earliest priorities to make sure that we’re on track to build and field effective capabilities and then train the guardians to operate in a contested domain so that we can counter activity by our strategic competitors,” he said.