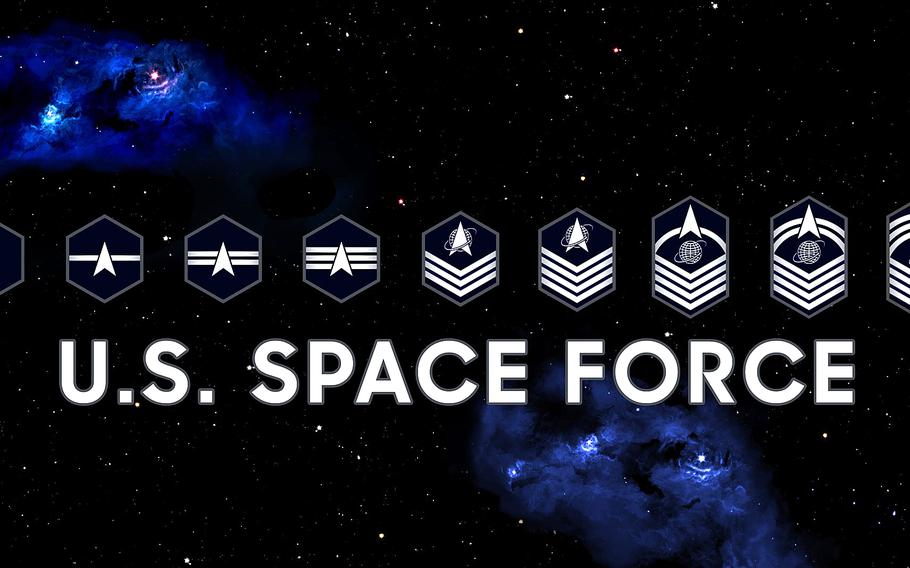 The Space Force this week unveiled its enlisted rank designs and a prototype service dress uniform as the newest military service looks to set itself apart from the Air Force while drawing on its heritage.

The service billed it in a Twitter post as “modern, distinctive, professional.” Some users reacted to similarities between the uniform coat and the costumes used in various science fiction series set in space, such as Star Trek and Battlestar Galactica. It features a standing collar and an angular overlapping front flap that buttons up the right side.

Getting some Wrath of Khan flashbacks all of a sudden… #ASC21 #afa #SpaceForce @Jeff_MartinTX pic.twitter.com/wskc9jiaq9

Chief Master Sgt. of the Space Force Roger A. Towberman revealed the ranks for specialist through chief master sergeant in a social media post Monday that included graphics and information sheets explaining the symbolism of the designs.

All of the ranks feature a “foundational Delta,” the triangular shape reminiscent of Star Trek. The shape was adopted as the Space Force emblem last year, drawing on its use in military emblems related to space since 1961, years before the science fiction show first aired.

As service members progress up the ranks, they move from earth into orbit, at least symbolically. Three junior ranks feature horizontal stripes representing “terra firma” on which the service is built, and the three senior-most ranks feature curving chevrons named after increasingly higher strata of orbit.

Unlike the Star Fleet of television and the silver screen, however, Space Force troops are still earthbound.

The first enlisted rank, specialist 1, features only the delta inside a hexagonal border, the number of sides representing the service as the military’s sixth. For each of the next three ranks, specialists 2 through 4, a horizontal “Vandenberg Stripe” is added across the delta. 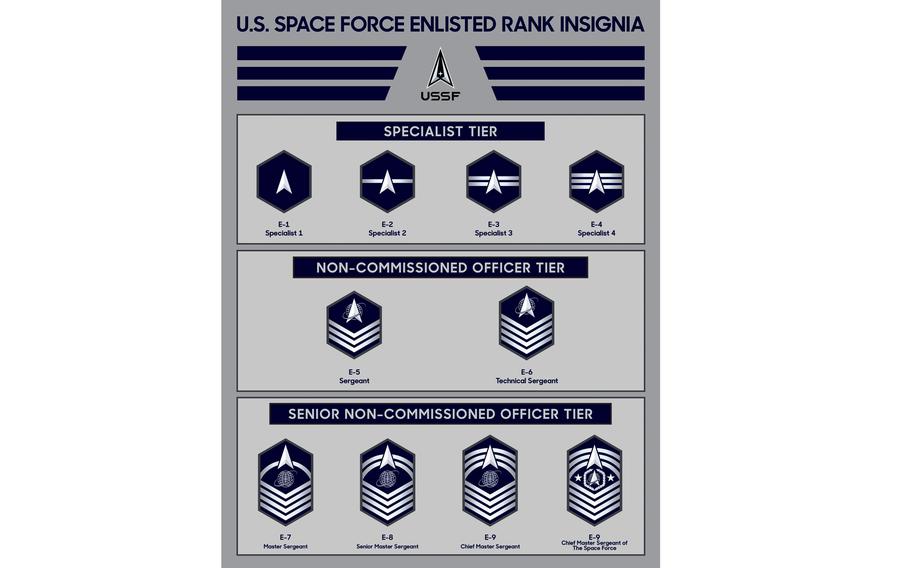 The Space Force has revealed its rank insignia for the enlisted side of the force. (Facebook/Chief Master Sgt. of the Space Force) 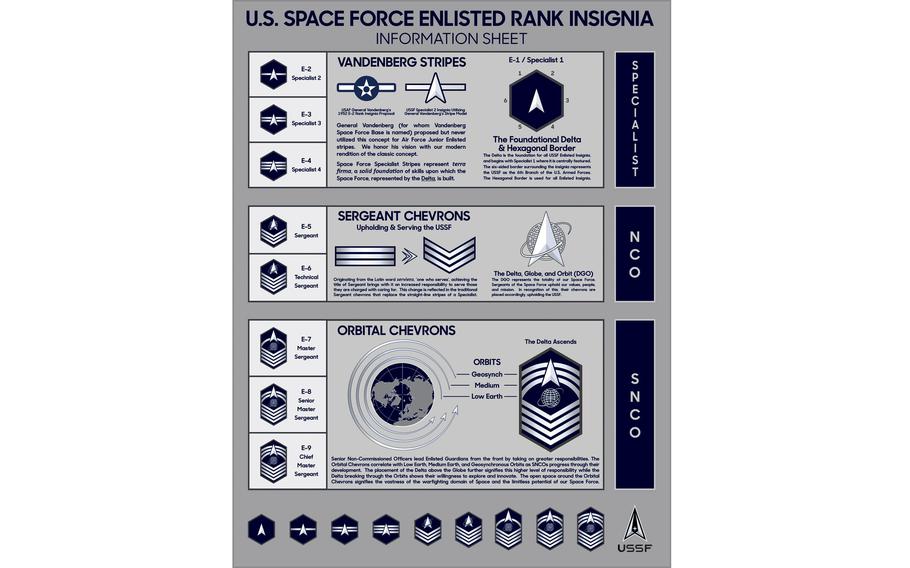 The Space Force has revealed its rank insignia for the enlisted side of the force. (Joe Chignola) 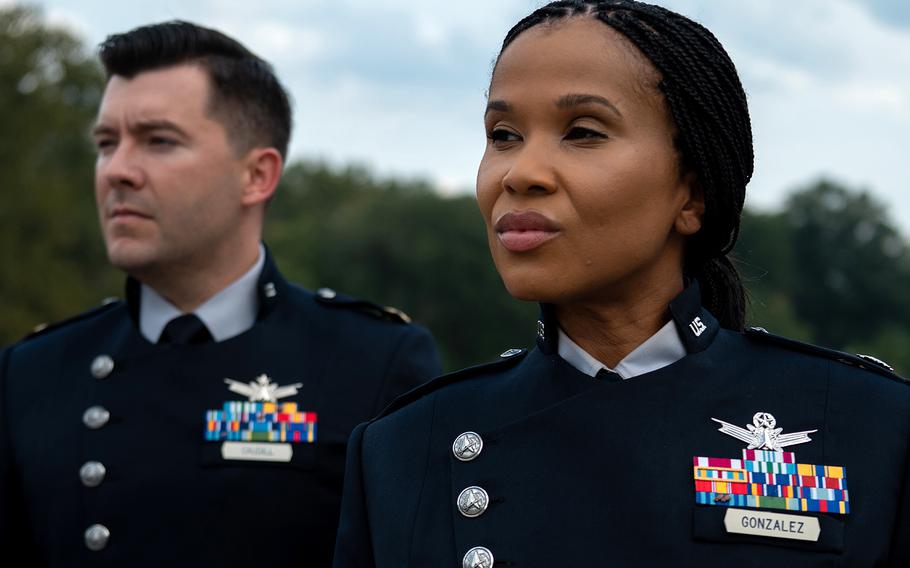 The stripes are a nod to a design Gen. Hoyt Vandenberg proposed for the Air Force ranks, but which was never used, the service said. The namesake of Vandenberg Space Force Base was the second chief of staff of the Air Force.

Sergeants and up will see those stripes transformed into upward bent chevrons, representing them as upholding and serving those they are charged with caring for under their leadership.

A globe and an orbital path are also added above the chevrons — something the service calls the Delta, Globe and Orbit, in a moniker reminiscent of the Marine Corps’ Eagle, Globe and Anchor. This formation represents the “values, people and mission” upheld by the chevrons, a service fact sheet says.

"The placement of the Delta above the Globe further signifies the higher level of responsibility while the Delta breaking through the orbits shows their willingness to explore and innovate,” the information sheet explains.

The overall look with downward pointing chevrons and arcing orbits gives an appearance something like Navy chief ranks, rather than those of the Air Force, where the upper chevrons culminate in points. Last year, many had unsuccessfully argued for the service to adopt Navy rank names, including Star Trek star William Shatner, who played Capt. James Kirk.

Since its founding in late 2019, the service has been focused on establishing its own culture and identity. It crowdsourced ideas for what it would call its members, settling on Guardians last year. It adopted a Latin motto “Semper Supra,” meaning “always above,” at the recommendation of an airman at Ramstein Air Base in Germany.

The reaction to Towberman’s post on Facebook unveiling the rank insignia appeared to be largely positive Tuesday.

“I was ready to be underwhelmed,” wrote commenter Aaron Warren in a Facebook post. “I think you guys did a good job. A good amount of difference, but not so much that I can’t get behind it. Well done.”