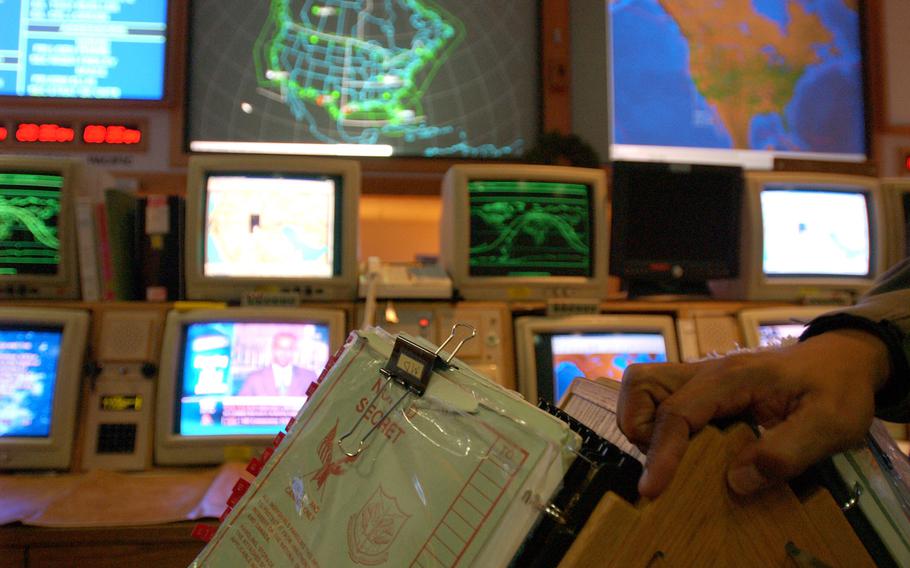 In this file photo, around-the-clock crews monitor U.S. skies from the command center of the Northern Command December 9, 2002, located deep within Cheyenne Mountain at the foot of the Rocky Mountains near Colorado Springs, Colorado. The Trump administration had decided to take the U.S. Space Command out of Colorado Springs and move the post to Huntsville, Alabama. (Kevin Moloney/Getty Images/TNS)

COLORADO SPRINGS, Colo. (Tribune News Service) — Military leaders overseeing U.S. Space Command backed down from full-throated support of a process that would move it from Colorado Springs to Alabama, but said they'll wait for a pair of federal investigations to conclude before they decide to reverse the decision.

Former President Donald Trump caused controversy Friday when he told a syndicated radio show that he "single-handedly" decided on Huntsville, Alabama, as the command's future home, short-circuiting a nonpartisan process at the Pentagon to make the basing decision.

In Colorado Springs for the Space Symposium, which packed the Broadmoor this week, new Air Force Secretary Frank Kendall said he puts as much faith in that Trump statement as he has in the panoply of his political pronouncements.

"President Trump has said many, many things," Kendall said in a news conference.

But Kendall — who is familiar with assets in Colorado Springs and Alabama from his more than 50 years of defense experience, including as an Army officer, defense contractor and in senior Pentagon posts — was clearly not ready to close the door on the Pikes Peak region as Space Command home.

"I think either one of them is certainly feasible as the headquarters," he said of Huntsville and Colorado Springs.

The Trump administration announced the Alabama move on Jan. 13, when the president had one week left in office. Immediately, rumors of political skullduggery emerged, with sources telling The Gazette that Trump had ignored senior military leaders with the Huntsville pick.

Colorado politicians from both political parties pointed to Trump's Friday remarks as proof that political shenanigans played a role and called on Biden to reverse the decision.

Space Command's Army Gen. James Dickinson, who has in the past expressed confidence in the Huntsville decision, was hesitant to back it up Tuesday, saying it would be "premature" for him to voice an opinion until investigations of the move by the Government Accountability Office and the Pentagon's Inspector General conclude.

Dickinson said he does want certainty for his command, which is provisionally located in Colorado Springs through at least 2026 as the Alabama decision plays out.

"To get to the next level, it will require resources, personnel and a permanent location for my headquarters," he said.

Reggie Ash, who heads military programs for the Colorado Springs Chamber of Commerce & EDC, said Tuesday that his sources were quiet on Space Command, too, even as thousands of space experts swirled through Space Symposium exhibit halls.

"Surprisingly, there's just not a lot of new information on the Space Command move this week," he said.

Space Command made its own move-free headlines.

Dickinson announced Tuesday that the command, which leads all American military missions in orbit, reached a startup milestone of "initial operational capability."

The announcement means the command, which celebrates its second birthday since its 2019 rebirth next week, can effectively defend American interests in orbit while deterring rivals from attacking U.S. space assets.

Dickinson said that Space Command, headquartered at Peterson Space Force Base, is "prepared to address threats from competition to conflict in space, while also protecting and defending our interests in this vast and complex domain."

The latest version of the command, which was headquartered here in the Cold War years but shuttered amid budget cuts in 2002, has now reached 900 troops, Dickinson said.

Dickinson didn't address the controversy in his remarks Tuesday morning, but he did talk about the importance of caring for the command's troops.

"Make no mistake, our No. 1 priority in all of this, in all of the missions areas we have, is to take care of those people," Dickinson said.