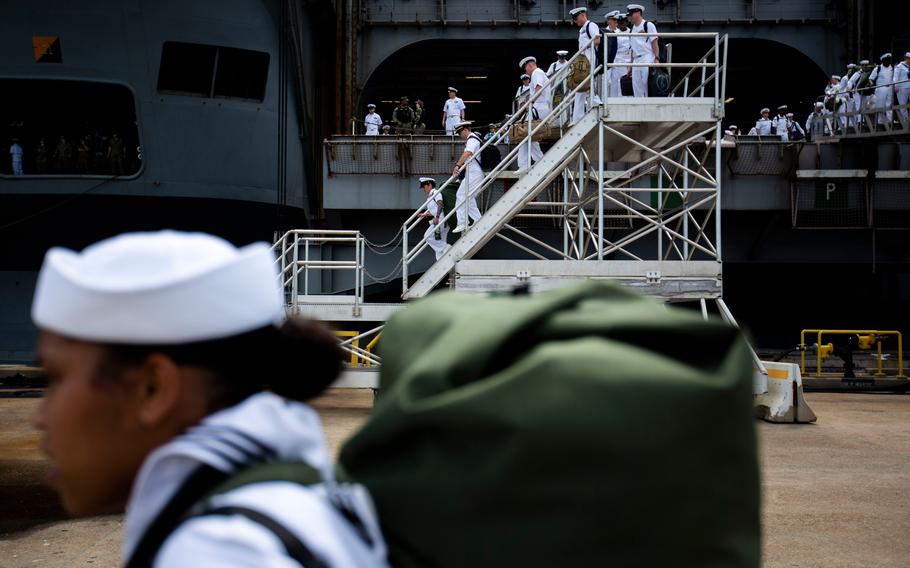 (Tribune News Service) — From submarine piers to child care centers — a $250 million chunk of the annual defense spending bill would be funneled into Hampton Roads military installations if approved by Congress this week.

The bill also covers a 4.6% pay raise for military service members and the Department of Defense civilian workforce, fully funds the Ford-class carrier program, and directs a review of how the Navy prevents and responds to suicides following a rash of deaths in Hampton Roads.

The bill, which is jam packed with provisions secured or supported by Virginia’s Democratic Sens. Tim Kaine and Mark Warner, was approved by the House of Representatives on Thursday. It must now clear the Senate, which both senators said they expect will happen between today and Friday.

Kaine highlighted funding for local construction projects, which would include the following:

• $47.72 million for a Dry Dock Saltwater System for CVN-78 at Portsmouth Naval Shipyard.

The bill doesn’t stop there. It will direct $32.6 billion in funding for the procurement of 11 battle force ships, including full funding for the Ford-class carrier program, CVN refueling and complex overhaul, and Virginia-class and Columbia-class submarine programs, supporting the shipbuilding workforce at Huntington Ingalls Industries in Newport News.

Meanwhile, Warner said his priority is tackling the needs of military families.

Warner touted language in the legislation that would direct the Department of Defense to reevaluate methodologies for calculating the basic allowance for housing to better reflect service members’ needs. The language would also require the Secretary of Defense to implement health-related recommendations made by the Department’s Inspector General related to privatized military housing.

“Our members in the service defending our country should be able to live in housing that doesn’t have mold or rodents in it,” Warner said.

Another provision Warner highlighted would overhaul how the military collects data and analyzes rates of food insecurity among service members and their families. Warner would also like to see the expansion of eligibility for the new “basic needs allowance,” which was passed by Congress in December 2021. The monthly, taxable allowance is for active duty military families whose gross income falls below 130% of the federal poverty line. The first payments will go out in January.

“If you are deployed and you have a spouse and kids back at home and they can’t put food on the table, that is wrong,” Warner said. “This defense bill helps us solve that.”

While a provision addressing mental health is not specific to Hampton Roads, Warner said Tuesday he hopes it will help address a rash of suicides linked to Norfolk’s Mid-Atlantic Regional Maintenance Center and the USS George Washington.

The Navy is currently investigating the apparent suicides of four sailors assigned to the Norfolk naval maintenance center which occurred in the span of a month, with the most recent occurring Nov. 26. The recent string of suicides comes eight months after three sailors assigned to the Norfolk-based USS George Washington took their own lives within the span of a week.

Stigma surrounding seeking mental health treatment is not an issue that is unique to the military, Warner said.

“But it is exacerbated with young men and women who are oftentimes separated from their families under high-stress jobs,” Warner said.