NAPLES, Italy — Watching the fighter planes launching from zero to 150 mph in two seconds is the roaring main event for visitors to an aircraft carrier during an exercise.

But at some point during the day, a sailor below decks aboard the USS Gerald R. Ford will turn 500 pounds of trash into nearly nothing, saving shipmates the unpleasant job of sorting and storing that continues on other aircraft carriers.

It’s among the host of new and unheralded technologies aboard the Navy’s newest carrier that officials say make the ship more efficient, while reducing its manpower needs.

“The differences (between the Ford-class and Nimitz-class) are significant behind the outer view of the ship,” Capt. Paul Lanzilotta, the Ford’s commanding officer, told reporters earlier this month while in international waters off the coast of France.

Among the innovations making life more comfortable for the roughly 4,500 people on the Ford are elevators that expedite storage of food and supplies, a vaporizing waste disposal system and powerful, self-cleaning food ovens that operate at the touch of a button.

Lanzilotta said some of the enhancements, such as design changes to the ship’s flight deck operations command center, or island, bolster the ship’s ability to meet mission requirements. 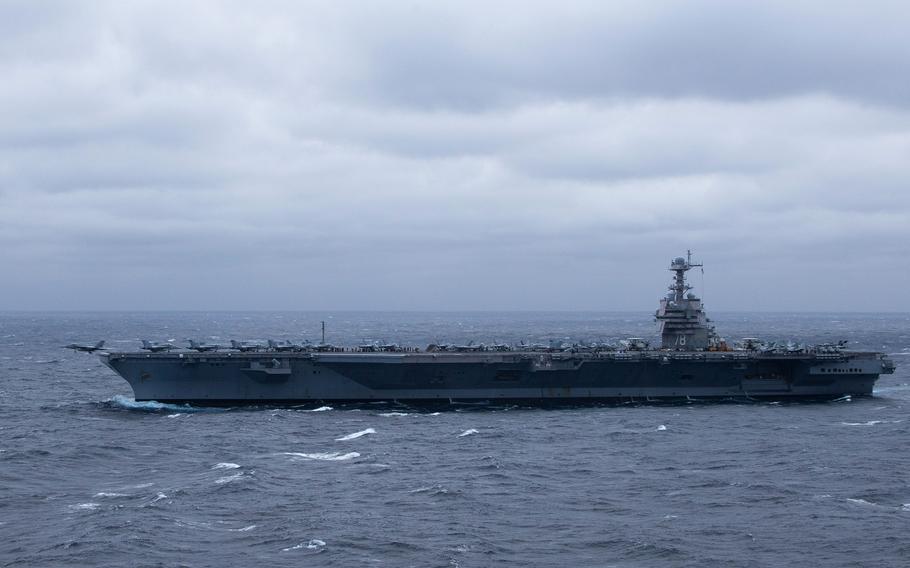 The $13.3 billion Ford returned Saturday to its Virginia homeport at Naval Station Norfolk, capping a long-delayed maiden deployment that included the U.S. 6th Fleet area of responsibility in Europe. Commissioned in 2017, the two-month deployment was delayed more than five years by a series of cost overruns, technology issues and other problems.

The test run, a prelude to a longer deployment planned in 2023, helped officials evaluate how the ship and its high-end technology, such as an electromagnetic aircraft launch system, or EMALS, would work alongside NATO allies and partners. Lanzilotta and other officials also were eager to showcase the ship’s improved capabilities over Nimitz-class carriers.

Here are five lesser-known new technologies or design changes on the Ford worth a closer look:

This garbage disposal mechanism vaporizes most of the Ford’s trash, including plastic, allowing it to be legally discharged at sea.

This eliminates the need to store trash, including plastic that used to be melted down into pucks and then discarded in port, according to a March 2021 Navy Supply Corps newsletter.

The system uses a plasma torch powered by an electric arc to burn garbage, resulting in a gas mostly made up of hydrogen and carbon monoxide, a process called plasma arc gasification, the newsletter states. Part of Ford’s food service design includes high-tech ovens that function like Instant Pot pressure cookers but significantly more powerful. They include product display menus that allow for push-button cooking, according to a Navy statement.

The ovens are linked to Wi-Fi and can be monitored. They’re also self-cleaning, becoming a sort of self-contained dishwasher complete with soapy water and rinse cycles that eliminate the need for chemicals and scrubbing, the Navy said.

Ford-class carriers have just two galleys, as opposed to the five on Nimitz-class ships. That allows for simultaneous, centralized service from the same source and cooks.

Food storage is located directly below the galleys, which are in the ship’s centerline, allowing more direct access that decreases the staffing levels needed to break down and store supplies, the Navy said.

Accordingly, the Ford’s food service division has about 90 fewer sailors than a Nimitz-class carrier’s does, according to the Navy statement. 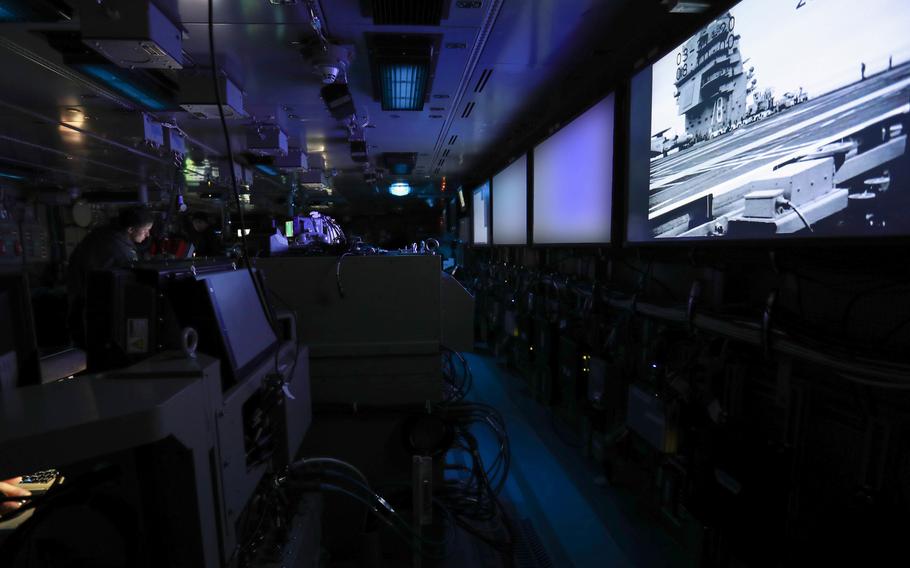 Sailors aboard the USS Gerald R. Ford stand watch in the ship's combat direction center during testing in 2020. The testing stresses the ship's combat systems, which include integration of new technologies like the dual-band radar. The screens in this photo were blurred by the Navy for security purposes. (Ruben Reed/U.S. Navy)

The system, which provides a 360-degree air picture around the ship, is the primary radar for contacting aircraft, according to the Ford fact sheet.

It features a three-panel, or array, radar without moving parts, which allows for a smaller island.

The Ford is the only carrier of its class with DBR, which a January report noted was performing below reliability requirements.

To reduce costs, the Navy jettisoned the system in favor of enterprise air surveillance radar for the USS John F. Kennedy and subsequent Ford-class carriers.

In September, the Defense Department announced that a $160 million contract (with options to $441 million) had been awarded to Raytheon Co. for DBR engineering and support. Zumwalt-class destroyers also have different version of DBR.

There are 10 programmable stores elevators for supplies aboard the Ford situated over centralized storerooms on various levels.

The design allows for transfer of food and supplies directly into the appropriate storerooms, shrinking the working crew from the typical 50 to 100 sailors on other ships and also minimizing time spent on the flight deck and in the hangar bay during replenishment, according to a 2020 Navy newsletter.

For example, during a May 2020 replenishment-at-sea, a crew of 18 on the flight deck were able to onload 143 food pallets in about two hours. It wasn’t clear how the supply elevators operated during the Ford’s recent deployment.

For example, an E-2D Hawkeye that Lanzilotta recently flew landed, cleared the runway, positioned for the next event, turned off one of the engines and refueled in four minutes.

The arrangement is part of a NASCAR-style approach to fueling, maintaining and arming planes on the Ford. That concept also is aided by the ship’s smaller island, which sits farther aft to create more room to move aircraft around, Lanzilotta said.