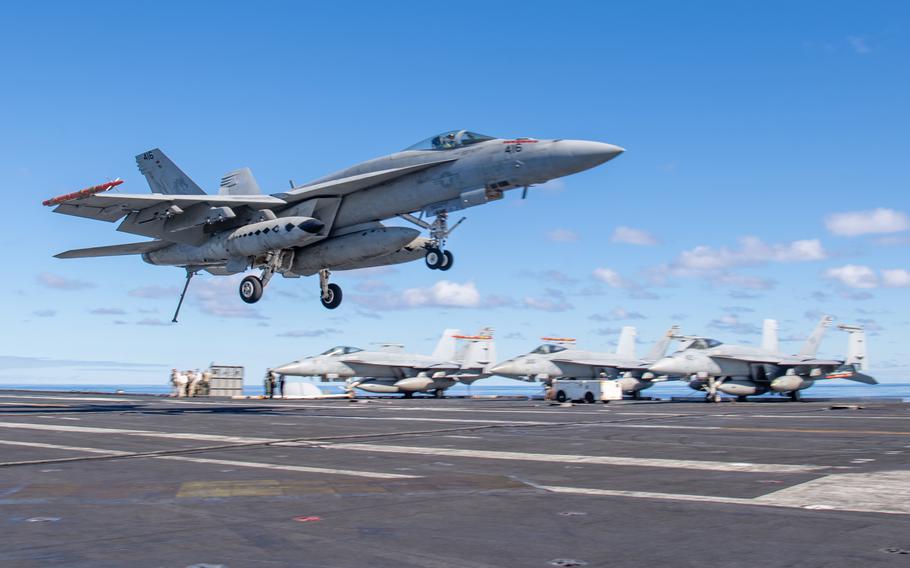 The cause of jet fuel contamination in the USS Nimitz’s drinking water remains undetermined several weeks after at least 11 sailors fell ill and the aircraft carrier was forced into an extended port stay.

Analysis of how jet propellant-5, or JP-5, entered the ship’s potable water supply in September still is being done, Naval Air Forces spokesman Cmdr. Zachary Harrell told Stars and Stripes prior to the carrier reaching its Bremerton, Wash., homeport Friday.

The incident is one among several contamination reports on sea and land in recent months that Navy watchers say could negatively affect morale, at a time when many sailors up for reenlistment have favorable job options and Pentagon leaders have expressed concerns about an increasingly difficult recruiting environment.

The Navy isn’t answering questions on its preliminary findings of how the Nimitz contamination occurred, but the possibilities include a fuel spill or a leak from a nearby pipe.

Another potential failure point is ballast water, which is placed in a ship’s bilge to keep it stable.

Pipes that carry nonpotable substances and are “permanently installed through potable water tanks” should be evaluated as well, the manual says.

It wasn’t clear whether those procedures were part of the evaluation on the Nimitz. But medical personnel have access to the manual.

While the manual specifies regular, routine testing of a ship’s water system for bacteria and disinfection residuals, it does not address testing for other contaminants, such as jet fuel, Harrell said.

Crew members first reported irregularities in their drinking water Sept. 16, while the ship was off the coast of Southern California.

Sailors began reporting illness symptoms the next day, though the Navy took several days to confirm that they were suspected to be contamination-related.

On Sept. 22, Harrell said that there were no confirmed cases. On Oct. 1, U.S. 3rd Fleet said 11 sailors had been treated for symptoms suspected to be related to fuel exposure. The symptoms included skin rashes, headaches and diarrhea.

Since Sept. 30, no sailors have reported symptoms potentially related to contaminants in the water, Harrell said, adding that the 11 sailors had been treated and cleared for duty.

On the same day as the initial reports of illness, the carrier was moored at Naval Air Station North Island in San Diego and hooked up to the municipal water supply. Tests later revealed jet fuel in the potable water system.

That contamination was pinpointed to a single tank, which was isolated from the system, the Navy said. As a precaution, three other nearby tanks also were taken offline.

“These tanks will be deep-cleaned and inspected upon return to Nimitz’s homeport of Bremerton, Wash.,” Harrell said Oct. 25.

The oldest carrier still in service, Nimitz was commissioned 47 years ago and is scheduled to be decommissioned in 2025, according to the Navy’s 2023 budget.

That’s consistent with a carrier’s 50-year service life, but the Navy is studying extending the life of its oldest Nimitz-class carriers, USNI News reported in April.

Like the Nimitz, the Abraham Lincoln was off the California coast at the time. A subsequent in-port inspection revealed that dirty water from the bottom of the ship, or bilge water, had infiltrated all three tanks.

But bilge water isn’t tested for bacteria, so the Navy doesn’t know whether that was the source of the contamination, Harrell said.

The Navy hasn’t confirmed any related illnesses on the ship.

The ships’ troubles come on the heels of a series of onshore spills in Hawaii at the Red Hill Bulk Fuel Storage Facility. The spills are thought to have contaminated the water supply for thousands of homes around Joint Base Pearl Harbor-Hickam.

The water pollution episodes could foster doubts among sailors about the Navy’s trustworthiness, commitment to their well-being and ability to provide a reasonable quality of life, said James Holmes, who chairs the maritime strategy program at the Naval War College in Newport, R.I.

“Uncertainties like that are bound to grate on morale,” Holmes said. “Sailors being sailors, they will wonder what their fate would be in wartime, when a China or Russia would target our logistics train, if we can't keep our ships habitable in peacetime.”