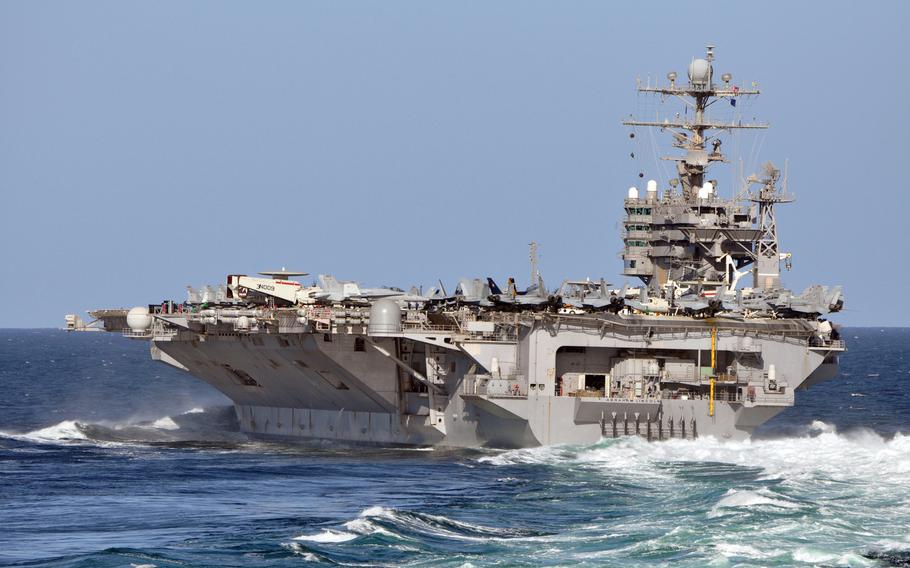 The USS Abraham Lincoln maneuvers in the Arabian Sea in December 2010. Contaminated water was found in some of the tanks aboard the aircraft carrier as it was moored off the Southern California coast in September 2022, Navy officials said. (Lee Apsley/U.S. Navy)

WASHINGTON — Contaminated water found in some of the tanks aboard the USS Abraham Lincoln as it was moored off the Southern California coast a few weeks ago got into the ship’s potable water system through a leak in one of its pipes, Navy officials said.

The Navy said earlier this month that E. coli bacteria and some foul-smelling water that was cloudy in appearance was found in some of the potable water tanks aboard the warship as it was off the coast of San Diego.

Officials said the water’s unusual appearance and smell led to the discovery of the E. coli in three of the ship’s 26 potable water tanks. However, they noted the two issues were not related to each other.

After the discovery of the bacteria, the Navy said the tanks were taken out of service and inspected.

“Those tanks were immediately isolated and secured from the potable water system, and the odor and cloudiness in the water abated by [the following day],” said Cmdr. Zachary Harrell, spokesman for the commander of the Naval Air Forces.

Harrell also said the affected tanks would be deep-cleaned and inspected and a thorough root-cause analysis was being done.

The Navy said the cloudy and smelly water was contaminated with bilge water, which contains various waste elements such as oil and chemicals that accumulate on lower parts of the ship.

“Personnel from Puget Sound Naval Shipyard and USS Abraham Lincoln completed the inspection of the affected potable water tanks. The inspection concluded that bilge water entered one of the potable water tanks through a hole that was found in the tank’s air vent line, causing the cloudy appearance and odor in the ship’s potable water,” Naval Air Forces officials said in a statement.

Typically, bilge water is pumped into a storage holding tank on ships and disposed of properly.

Navy officials said there were no confirmed illnesses from the bilge water or the E. coli contamination have been documented. About 3,000 sailors were aboard the USS Abraham Lincoln when the tainted water was found Sept. 21.

“Drinking water aboard U.S. Navy ships is tested for bacteria once a week when in port or at sea,” he said. “The water is tested more frequently when contamination is suspected.”

No similar contaminations have since been found on any other U.S. Navy vessels, the Naval Air Forces said.

E. coli is a very common bacteria, and most strains are not seriously threatening to humans. People who are sickened by the most common strain can experience mild symptoms such as nausea or vomiting, diarrhea and stomach cramps, according to the Centers for Disease Control and Prevention.

The USS Abraham Lincoln is a nuclear-powered Nimitz-class aircraft carrier named after the 16th president of the United States. It was built in the 1980s and commissioned in 1989. Its home port is Naval Air Station North Island in San Diego.

The USS Abraham Lincoln was the Navy’s second aircraft carrier in about a month to have contaminated water. Officials delayed the departure of the USS Nimitz from San Diego in September after jet fuel was found in its potable water system. Nearly a dozen sailors were sickened on the Nimitz but not seriously. It’s not yet known how the aviation fuel got into the ship’s water.

The Nimitz’s contamination delayed the aircraft carrier’s departure from the port in San Diego by a couple weeks. The vessel is the lead ship in the Nimitz class, which consists of 10 nuclear-powered aircraft carriers.