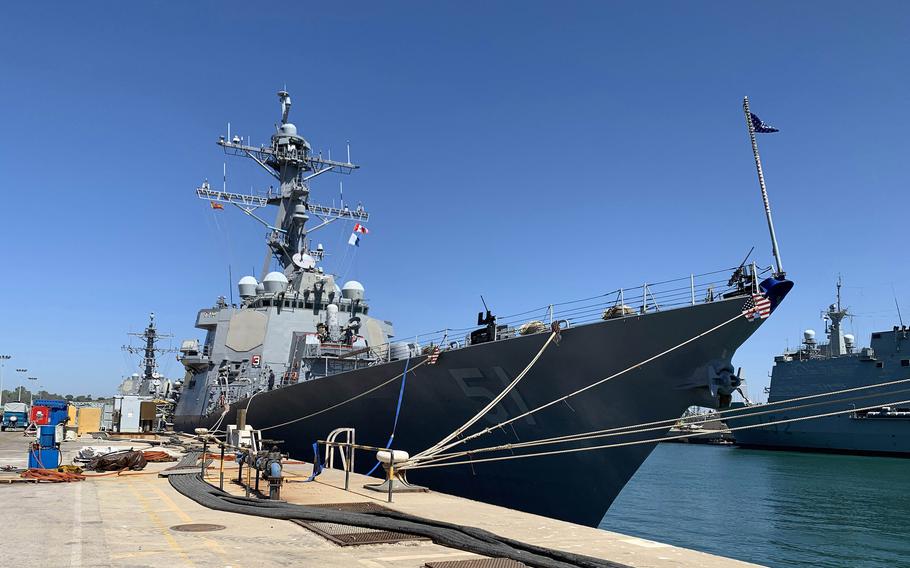 The destroyer USS Arleigh Burke is moored at Naval Staton Rota in Spain on Aug. 18, 2022. Foreign minister Angeles Moreno told the Spanish parliament last week that a bilateral defense agreement with the U.S. must be updated to allow for an expansion at the Navy’s base in Rota. (Alison Bath/Stars and Stripes)

The U.S. and Spain will soon launch negotiations on a new defense pact for an expanded naval presence in Spain, while elsewhere in Europe, the Army plans to set up additional units by next year, according to officials.

Spain’s foreign minister, Angeles Moreno, told the country’s parliament last week that a bilateral defense agreement with the U.S. must be updated to allow for an expansion at the U.S. Navy’s base in Rota.

Moreno said negations on the pact would soon begin, Spanish media reported Wednesday. The talks are connected to the June announcement at the NATO Summit in Madrid that the U.S. will increase the number of destroyers based in Spain from four to six.

While an official timeline for the ships’ arrival in Spain hasn’t been set, U.S. military commanders have put 2025 or 2026 as target years.

Some other U.S. military moves announced in Madrid are running up against lengthier timelines.

Earlier this month in the German town of Sembach, the command stood up the 52nd Air Defense Artillery Brigade, which now oversees multiple artillery units based in Europe.

And in September, the 95th Combat Sustainment Support Battalion was activated in Baumholder, Germany, to support logistics efforts on the Continent, USAREUR-AF said.

The expansion of the U.S. military mission in Europe coincides with Russia’s war on Ukraine, which has ushered in a wave of American reinforcements.

There are now roughly 100,000 U.S. troops operating in Europe, drawn from a mix of permanently based and rotational units. That is up from about 80,000 before Russia’s late February invasion.