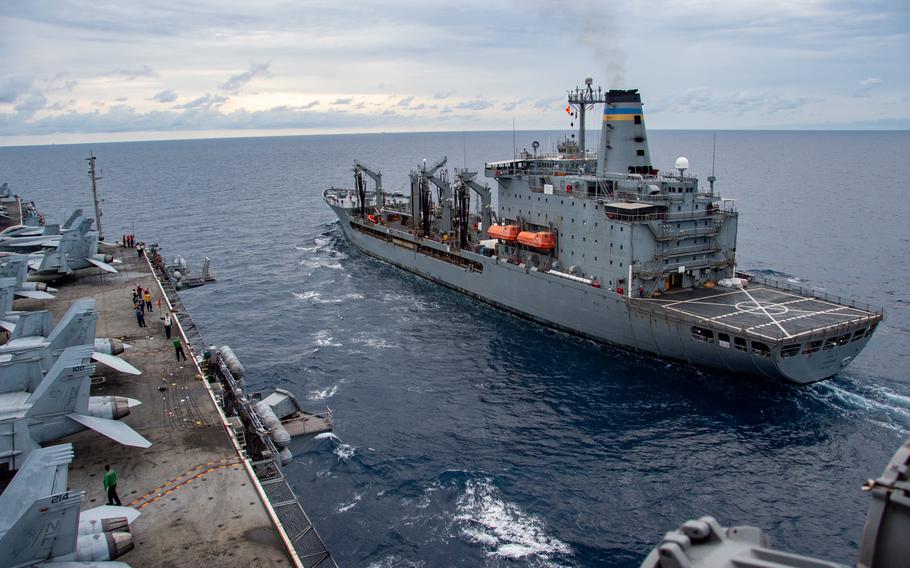 A U.S. aircraft carrier and strike group have entered the South China Sea as part of what the 7th Fleet said was a scheduled operation amid rising tensions with China over a potential Taiwan visit by House Speaker Nancy Pelosi.

The USS Ronald Reagan, a Nimitz-class nuclear-powered supercarrier, made its way to the disputed waters following a five-day port call to Singapore, departing Changi Naval Base on Tuesday, the US 7th Fleet said in reply to a query from Bloomberg News. The trip follows remarks this week by China's Foreign Ministry spokesman Zhao Lijian that Beijing was getting "seriously prepared" for the possibility that Pelosi could visit Taiwan, a self-governing island that China considers part of its territory.

While the 7th Fleet declined to say where the carrier was heading following its first trip to the city-state since 2019, it had already been conducting maritime security operations in the South China Sea prior to its arrival, having left for its annual spring patrol in May from Yokosuka, Japan, where it's based. Those included flight operations with fixed and rotary-wing aircraft, maritime strike exercises and coordinated tactical training between surface and air units.

"USS Ronald Reagan and her strike group are underway, operating in the South China Sea following a successful port visit to Singapore," said Cmdr. Hayley Sims, a public affairs officer for the Japan-based US 7th Fleet. "I will add that Reagan is continuing normal, scheduled operations as part of her routine patrol in support of a free and open Indo-Pacific."

China claims more than 80% of the South China Sea, one of the world's busiest shipping routes, based on a 1947 map showing vague markings that has since become known as the "nine-dash line." The U.S. estimates that more than 30% of the global maritime crude oil trade passes through the waters.

"The United States, once again, sent vessels to the South China Sea to flex its muscles," Chinese Foreign Ministry spokesman Zhao Lijian said during a regular briefing Thursday. "It is clear to us who is the biggest threat to security in the South China Sea and beyond."

China has ramped up military activity around Taiwan to signal its displeasure with past high-profile visits. While the People's Liberation Army could step up sea and air patrols during Pelosi's potential visit to Taiwan, anything more severe is unlikely, said Blake Herzinger, an Indo-Pacific defense policy specialist.

"I really don't think the PLA is going to start a war over Pelosi visiting Taipei," he said. "If you believe that Beijing is planning an imminent-ish invasion of Taiwan, as some do, kicking off a war next week would be suicide for their plans."

President Joe Biden is set to speak with Chinese leader Xi Jinping on Thursday amid the fresh tensions over Taiwan, according to people familiar with the matter. Biden told reporters last week that the U.S. military didn't think Pelosi's trip was a good idea, prompting consternation in Taiwan.

Pelosi is looking at a visit to Japan in early August as part of her trip to the region, Kyodo News reported. Officials from the biggest U.S. ally in Asia have increasingly spoken out about how Taiwan's security directly affects Japan, but Tokyo has emphasized there is no change to its policy on ties with Beijing, which sees the island as part of its territory.

Former Japanese Defense Minister Shigeru Ishiba told Taiwanese President Tsai Ing-Wen he wanted to see talks between Tokyo and Taipei aimed at fending off any contingency in the region.

The carrier's movements in the South China Sea this month occurred as the USS Benfold, an Arleigh Burke-class destroyer, conducted a transit through the Taiwan Strait. Secretary of the Navy Carlos Del Toro said onboard the USS Ronald Reagan last week without naming names that countries "misrepresent" U.S. maritime operations, including those of the Benfold and Ronald Reagan, and "aim to claim the resources of others."

"Unfortunately, there are nations in the world that would have one believe their sovereign territories extend well beyond the established rules and norms," he said.

Bloomberg's Isabel Reynolds and Dan Murtaugh contributed to this report.