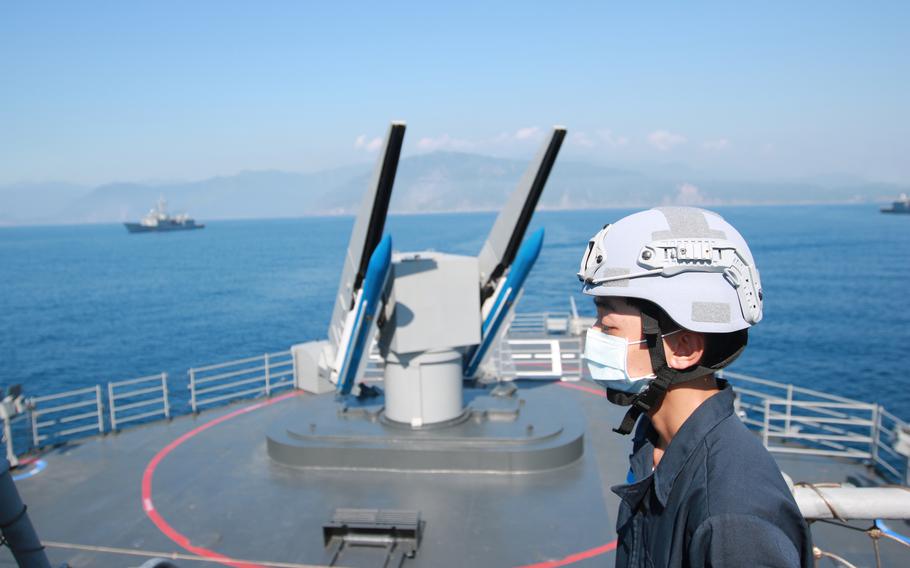 A Taiwan navy sailor on the Kee Lung-class destroyer DDG 1803 outside of Suao, Taiwan, on July 26, 2022. (Vic Chiang/The Washington Post)

TAIPEI, Taiwan — Taiwan’s military pledged it is action-ready for a Ukraine-style response to an invasion during annual drills this week, even as Taiwanese security experts downplay the odds of reckless Chinese aggression over a possible visit to Taiwan by House Speaker Nancy Pelosi.

On Wednesday on Bali beach, Taiwanese troops practiced repelling a potential amphibious assault along the stretch of waterfront connecting Taipei Port and the Tamsui River mouth, crucial to defending the capital city of Taipei.

The invasion drill comes at a high point of tension in the Taiwan Strait after Beijing lashed out at the United States over the potential Pelosi visit, sparking concern that the situation could spiral into the worst cross-strait crisis since the 1990s.

The drills, part of a five-day program of civil and military preparedness exercises, began with explosions that sent up clouds of black sand. The imitation enemy assault was met with helicopters, tanks and fighter jets, while army reservists manned a network of sandbag-lined trenches.

The exercises mimic wartime more closely than ever, and were designed after “closely monitoring the international situation as well as the war in Ukraine,” said Sun Li-fang, spokesman for Taiwan’s Ministry of National Defense.

Sun added that although the visit by Pelosi was only hypothetical, the Taiwanese army was already trained for China’s possible response and was confident that Taiwan could deal with whatever the People’s Liberation Army decided to do.

China claims Taiwan as its own territory and threatens to seize the self-governing island of 23 million if Taipei formally declares independence. Neither the leadership nor the people of democratic Taiwan have shown any interest in submitting to Chinese Communist Party rule. 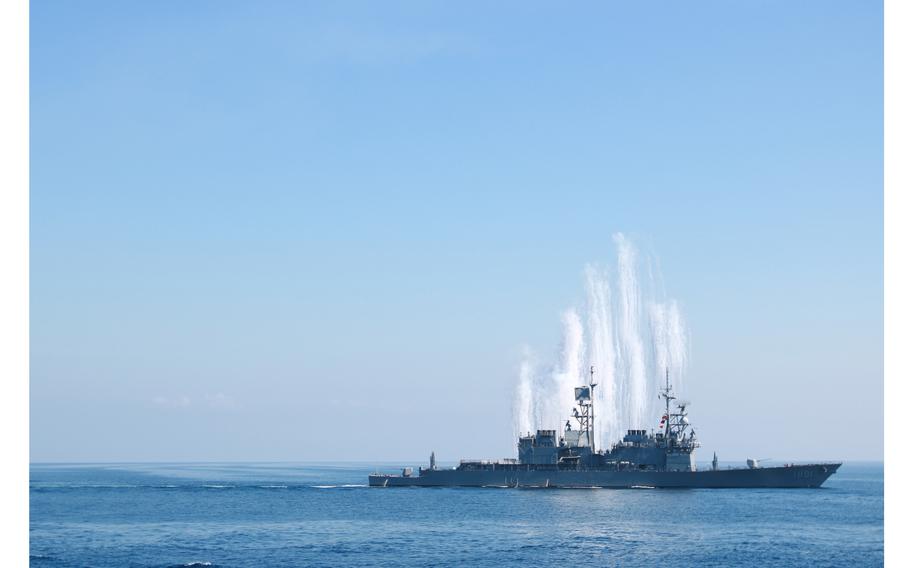 China has pursued a decades-long mission to diplomatically isolate Taipei, including voicing fierce opposition to international visits by other countries’ officials or lawmakers.

Speaking to the Taiwan-hosted Ketagalan Forum — 2022 Indo-Pacific Security Dialogue on Tuesday, Taiwanese President Tsai Ing-wen underscored that Russia’s invasion of Ukraine had shown that “authoritarian regimes will not hesitate to violate the sovereignty of other states.”

Without naming China, she warned against authoritarian actors that threaten to upend the regional balance and use “gray zone tactics” — coercive activities below the threshold of actual military combat — to weaken international norms.

Tsai did not address concerns in Washington that a possible trip by Pelosi could spark a major crisis in the Taiwan Strait. If it goes ahead, the visit would be the first by a U.S. House speaker to Taiwan in 25 years.

China’s Ministry of Defense on Tuesday said it “absolutely would not sit by and watch” and promised “forceful measures to thwart any interference by outside forces.”

The escalating standoff is likely to feature in discussions during an expected call between President Joe Biden and China’s leader, Xi Jinping, this week.

When asked whether intensifying cross-strait tensions have caused changes in Taiwan’s naval combat readiness drills, Maj. Gen. Feng Kuo-wei said in an interview Tuesday that standard procedures were followed, adding that “national defense preparations are carried out every day.”

As Taiwan seeks to strengthen its defenses and warn the world about a growing threat of Chinese authoritarianism, many Taiwanese security experts maintain that a Pelosi visit would not trigger direct military action by Beijing.

Shen Ming-shih, the director of national security research at the Institute for National Defense and Security Research, a think tank in Taiwan, said that China’s sending warplanes over Taiwan to shadow Pelosi’s flight was “very unlikely.”

China’s using military aircraft to press or come dangerously close to the aircraft carrying Pelosi would be “unsafe and irrational behavior,” especially since Xi wants stability in the run-up to the 20th Community Party congress in the fall, when he is expected to take on a precedent-breaking third term, Shen said. 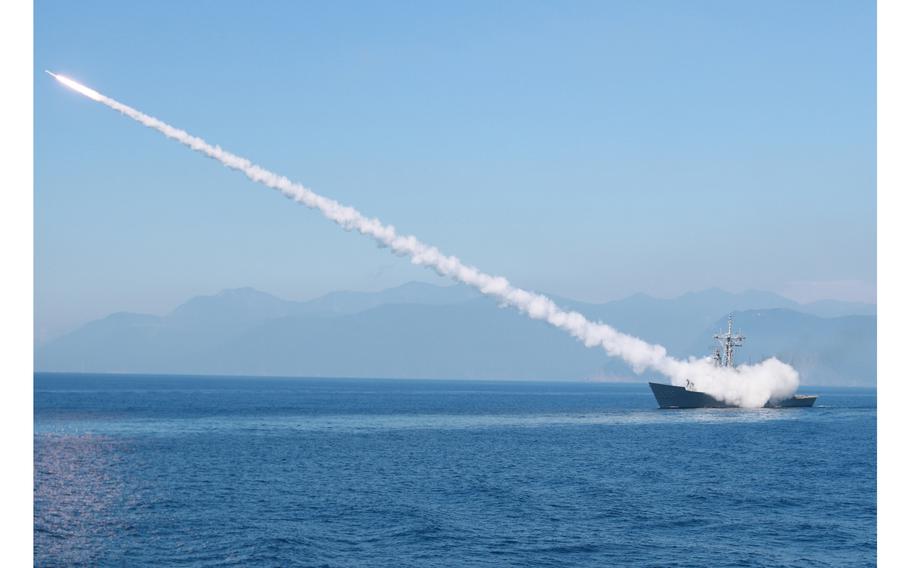 Shen added that China’s most likely response would be a large-scale show of force with jets to the north or southwest of Taiwan, similar to the saber-rattling last year when the Chinese air force repeatedly broke daily records for the number of fighter jets sent close to Taiwan’s airspace.

Despite concern in Washington, Taiwan’s annual five-day exercises, although marginally scaled up, proceeded largely as usual.

Piercing air raid sirens began the Wanan air defense drills in Taipei on Monday afternoon, bringing the city to a halt as police urged pedestrians indoors and vehicles off the roads. The attempt to raise public awareness about how to respond to emergency warnings and avoid injury in the event of an attack is by now familiar to the Taiwanese.

On Tuesday, in the seas off Suao naval port, a missile launched from a navy frigate left a trail of smoke in the sky as depth charges threw up spray. F-16 fighter jets passed above as guided-missile destroyers fired booming cannons.

Taiwan’s coast guard also joined the annual Han Kuang exercises for the first time this year to highlight the importance of preparing nonmilitary agencies for war. Dressed in a military uniform, Taiwan’s president boarded a destroyer during the drills for only the second time since she took office.

Jaw-ling Joanne Chang, a research fellow at the Institute of European and American Studies at Academia Sinica, a government-backed Taiwanese research institute, said that China’s reaction of issuing loud threats may end up backfiring. “If [China] takes drastic action, won’t it cause more countries around the world to be concerned about the situation in the Taiwan Strait?” she said.