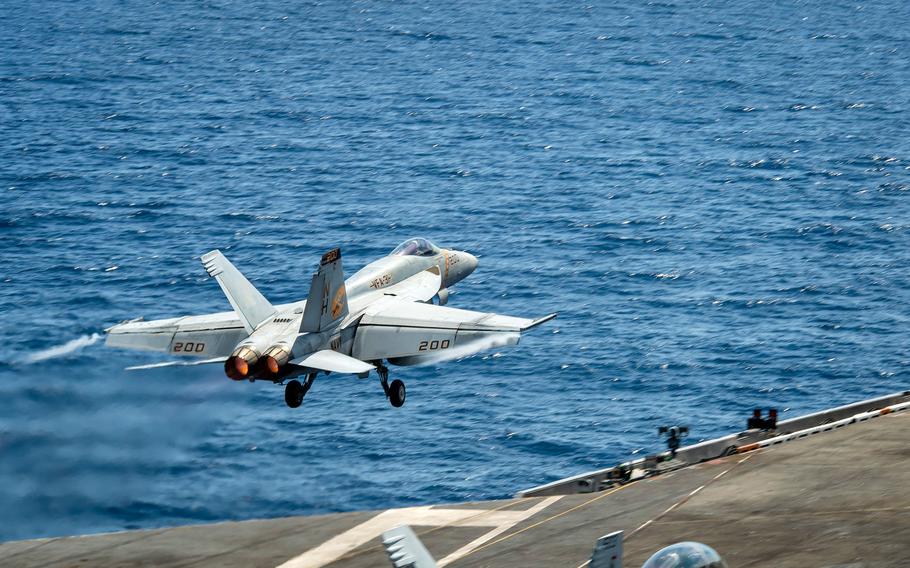 WASHINGTON — A senior Pentagon official on Tuesday warned of an unprecedented spike in “direct, aggressive, unsafe” behavior by China against U.S. and partner military forces in the skies above the South China Sea, predicting the trend would probably worsen as Beijing works to expand its regional dominance.

Ely Ratner, the Defense Department’s assistant secretary for Indo-Pacific security affairs, characterized the encounters as a campaign of “coercion and harassment” that has escalated dramatically over the past five years. He accused the Chinese military of assorted misconduct, including aircraft intercepts at dangerously close range and the release of objects into the air that could compromise a plane’s engine.

The flurry of activity “looks like a pattern and a policy,” Ratner said, “and not just a decision by an individual pilot.”

Ratner’s remarks, made during a conference in Washington organized by the Center for Strategic and International Studies, marked the latest in a series of pointed statements from the Biden administration underscoring the erosion of U.S.-China relations. Last month, speaking at the Shangri La Dialogue, Defense Secretary Lloyd Austin also warned that China’s moves toward regional dominance were becoming more “coercive and aggressive.”

A focal point is Washington’s material support for Taiwan, including of its defense sector, and looming suspicion that Beijing, emboldened by Russia’s attempted conquest of Ukraine, intends to move militarily against the government in Taipei.

The Chinese Embassy in Washington did not immediately respond to a request for comment.

China, Ratner said, is using “military intimidation and force” in a bid to disrupt the region’s status quo. It’s a marked departure from Beijing’s long-practiced strategy of securing assets and influence through economic and diplomatic coercion, he said.

By and large, the trend has been observed mostly in the air, Ratner said, noting that he expects that could change.

“We haven’t seen a similar trend on the water yet, but my suspicion would be that’s coming,” he added. The United States, he said, has no intention of scaling back “freedom of navigation operations,” in which naval vessels pass through international waters in the region. He called the patrols “critical to enforcing the rules-based international order.”

In recent months, Canada and Australia both have accused Beijing of dangerous maneuvers to intimidate their pilots during routine flights. U.S. officials have not disclosed many more details to buttress their claims, Ratner acknowledged, saying he was working to declassify the data on China’s recent intercepts to illustrate the trend more substantively.

Some in Washington see a growing urgency around the issue, particularly in light of the complexities underpinning the United States’ relationship with Taiwan.

Washington’s approach has been governed since 1979 by the Taiwan Relations Act, which states in part that U.S. policy is to provide Taiwan with defensive arms and help to maintain its ability to resist any threat to its security - without expressly committing to come to the island’s defense should China attack. The administration has taken pains to preserve that strategic ambiguity, pulling back on President Joe Biden’s recent statements that the United States would respond “militarily” should Beijing attempt to seize control of the island.

Tensions spiked this month after Beijing threatened consequences if House Speaker Nancy Pelosi, D-Calif., followed through with a visit to Taiwan in August, pledging to take “strong measures” in response. Though delegations of lawmakers make trips to Taiwan periodically, Pelosi would be the first House speaker to make such a visit since Newt Gingrich in 1997.

Biden said last week that “the military thinks it’s not a good idea right now” for Pelosi to visit Taiwan, fearing Beijing could use the VIP visit - as speaker, she is third in line for the presidency - to ignite a wider conflict.

Pelosi has appeared undeterred, however, and has received uncommon support from Republicans, including former president Donald Trump’s last Senate-confirmed defense secretary, who during a speaking engagement Tuesday played down China’s rhetoric in response to Pelosi’s planned visit and warned that allowing “another county to dictate where U.S. officials travel” would set a poor precedent.

“We should not take all these declarations and proclamations from Beijing too seriously,” Mark Esper said. “Do we honestly think they’re going to start a war or do something because the speaker of the House travels to Taipei? . . . If we allow Beijing to start dictating who can or cannot travel, then where does that end?”

Biden, Kirby said, “wants to make sure that the lines of communication with President Xi on all the issues - whether they’re issues we agree on, or issues where we have significant difficulties - that they can still pick up the phone and talk to one another candidly and forthrightly.”

Anxiety over when and how Beijing might force a functional reunification of Taiwan with mainland China also is helping to drive initiatives to make the United States less dependent on exports from the island.

On Tuesday, the Senate advanced a bill that would direct $52 billion toward subsidizing production of semiconductors. The United States is largely dependent on Taiwanese exports for the chips that are integral to the functioning of electronic and computing equipment, and has lagged behind China in investing in a homegrown industry.

The legislation is expected to secure enough votes in the Senate and House to be signed into law.