USS Fort Worth is saved, for now. Another ship to bear the city’s name wasn’t so lucky 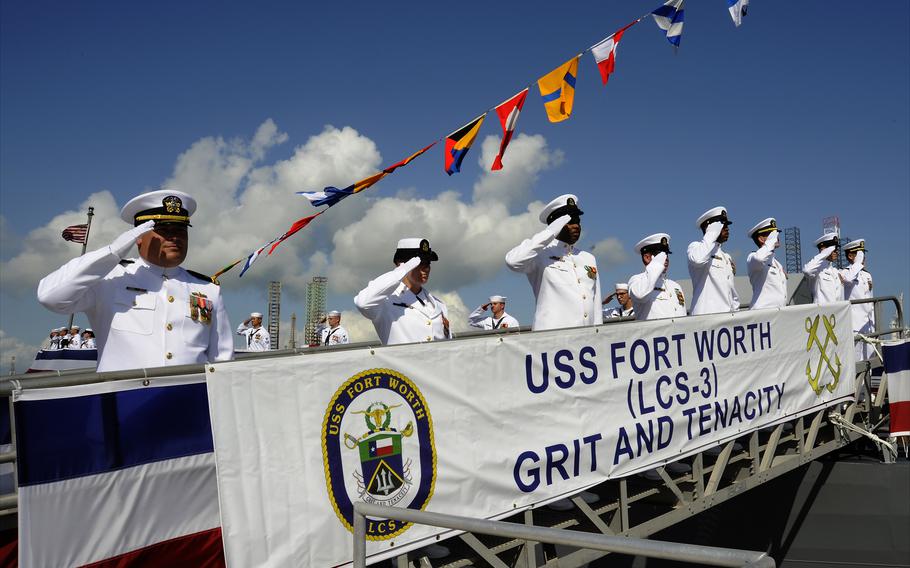 The crew of the USS Fort Worth during its commissioning in Galveston, Texas, on Sept. 22, 2012. (Lockheed Martin Corporation/TNS)

(Tribune News Service) — “USS” before a ship’s name stands for “United States Ship,” and only vessels of the U.S. Navy can carry that designation.

Presently the Navy has one ship in the fleet named for Fort Worth. The USS Fort Worth, part of the Freedom class of vessels, has been in the news recently because the Navy wanted to scrap it. The pride of Fort Worth is only 10 years old and should be in the prime of life for a warship. But current naval doctrine considers it obsolete. The Freedom class warships are littoral combat ships (LCSs), intended to operate in coastal waters interdicting pirates and other second-class hostiles, but the LCS class is no match for the more heavily armed warships it might encounter, so the Navy is ready to scrap it.

This is not the first time the Navy has jilted Fort Worth. The city was proud as a peacock in 2012 when the USS Fort Worth was commissioned. This was directly attributable to the influence of long-serving U.S. Rep. Kay Granger, aided by a letter-writing campaign to Congress. It didn’t hurt that Fort Worth also has a strong military heritage going back to its 19th century origins. The result was that the Fort Worth was proclaimed as the first Navy ship to carry the city’s name, which is only half true.

By tradition, U.S. warships are named by the secretary of the Navy, guided by long-established criteria. Most public attention is focused on capital ships, the largest and most powerful in the fleet. For instance, modern aircraft carriers are named for “great Americans,” such as presidents and fighting admirals. In the early 20th century, the practice was to name battle cruisers for cities.

The battle cruiser was a class of warship only slightly inferior to the battleship in terms of armor and armament, but faster, allowing it to outrun anything it couldn’t outfight. Battle cruisers had the added appeal of being cheaper to build than the dreadnoughts of the world’s navies while still superior to old-fashioned armored cruisers. Going into World War I, the British and Germans led the world in the number of battle cruisers in their fleets.

The U.S. Navy did not have any battle cruisers when it entered the war in 1917 and did not construct any during the war. However, the Naval Act of 1916 authorized six vessels of that class, to be named for the first vessel of that class, the Lexington. They were to be longer and less heavily armed than any battleship on the drawing board but at 34 knots, much faster. Navy plans called for building six battle cruisers, all at the same time but at four different shipyards. The potential enemy the USN had in mind was the Japanese navy, which was at the time on a building spree to make it the second-largest fleet in the world after the British. The U.S. feared Japanese superiority in battle cruisers, which could threaten the sea lanes and U.S. territories in the Pacific. The USN possessed no battle cruisers to Japan’s four, and, more worrisome, the Japanese had eight more under construction.

Despite concern in Congress about how much the new ships would cost in scarce post-war dollars, the news of their construction was greeted with joy in the cities and states that would be the beneficiaries of the naming process.

One of the six ships was designated “City of Fort Worth.” When the news was released, the city made big plans to celebrate the launching, at least two years away. The government asked Marion Sansom, a Fort Worth cattleman and banker and a member of the Wilson administration ( War Finance Corp.), to name a “sponsor” for the ship, another tradition. He tapped Anne Burnett, granddaughter of his old cattleman buddy, Burk Burnett, who at the time was attending school in Washington, D.C.

Secretary of the Navy Josephus Daniels picked Fort Worth over numerous other possible cities because of its political clout in Washington and because it had generously “oversubscribed” the fourth Liberty Loan drive, chaired in Tarrant County by Marion Sansom. Anne’s father, Tom Burnett, and grandfather Burk both declared she would be glad to represent Fort Worth as sponsor for the ship, an honor that included christening the new ship with a bottle of champagne when it was launched.

Not generally known even then was that this was the second time Fort Worth was to be recognized with a ship’s name during the war. In 1917 it was proposed to name a ship in the Merchant Marine for Fort Worth. Only a month later the choice of a ship to be named for Fort Worth was upgraded to a battle cruiser, the highest recognition any city could receive for a naval vessel, a little ironic since the nearest body of water to the city was Lake Worth.

The six keels were laid in 1920 and work was well underway by March 1922 when construction came to a halt, the result of agreements in the Washington Naval Treaty between the United States, Great Britain, France, Italy, and Japan. That historic treaty placed limits on the size of the signatories’ navies and stopped ongoing construction of new battleships and battle cruisers. The two U.S. battle cruisers in the most advanced stage of construction were converted to aircraft carriers, the U.S.S. Lexington and U.S.S. Saratoga, which went on to fame in World War II. The other city ships along with their names were relegated to a footnote in naval history.

Thus ended the sad story of the first USN ship intended to carry the name of our city. It took another 93 years to accomplish it, but now the Fort Worth name is proudly carried to the major ports in the world.

Still, plans to decommission the USS Fort Worth may have only been delayed for a few years, not canceled. Those plans represent a double slap in the face to the city since the Fort Worth’s builder was Lockheed Martin, the same company that is building the F-35 right here in Fort Worth.

There is a larger irony to the story. In 1922, a ship named for our city fell victim to international politics that kept it from getting off the drawing boards. Exactly 100 years later, the Navy decides that littoral combat ships like the USS Fort Worth no longer serve its strategic doctrine and plans to mothball them. Perhaps Fort Worth should build its own navy? Wait, it did that once! That is the subject for a future story.