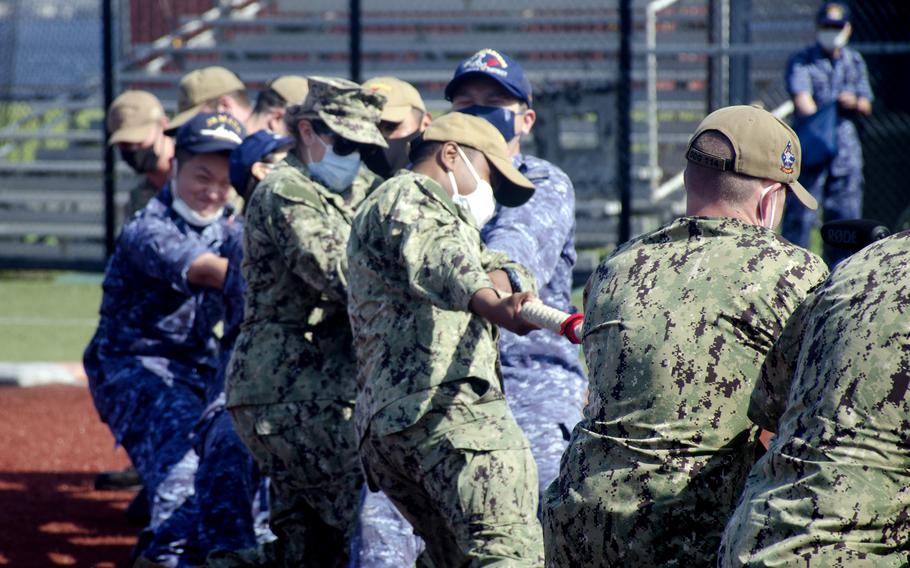 U.S. and Japanese sailors compete in a tug-of-war competition during Fleet Week Japan at Yokosuka Naval Base, May 25, 2022. (Alex Wilson/Stars and Stripes)

Sailors from the U.S. Navy and Japan Maritime Self-Defense Force teamed up May 23-27 for a week of contests and activities at naval bases around Japan, including Yokosuka, the homeport of the U.S. 7th Fleet.

Fleet Week Japan serves to familiarize the allied sailors with one another and their cultures, according to Naval Forces Japan. The inaugural events in 2021 were held virtually due to restrictions imposed to combat the spread of COVID-19. This year, the two sides met up for local trips and competitive events.

“The purpose of Fleet Week Japan is to celebrate the relationship between the U.S. and Japan,” Rear Adm. Carl Lahti, commander of Naval Forces Japan, told Stars and Stripes in an email Friday. “It is about taking the time to explore our cultures, and to engage with our Japanese and JMSDF counterparts on a more personal level.”

On May 25, for example, three teams, each a mix of Japanese and American sailors, huddled together at Yokosuka to prepare for a tug-of-war, the final event of an already busy day. U.S sailors from Yokosuka joined Japanese sailors from the adjacent Maritime Self-Defense Force base in the team-building exercise. U.S. and Japanese sailors celebrate their tug-of-war victory during Fleet Week Japan at Yokosuka Naval Base, May 25, 2022. (Alex Wilson/Stars and Stripes)

The hands-on nature of a tug-of-war contrasted with the personal challenges that took place in isolation last year — long-distance walking and stair climbing — as part of the first Fleet Week Japan. Some personal exchanges took place between officers from both countries.

On May 23, 10 U.S. and Japanese officers from Yokosuka traveled to Kamakura, the 12th-century capital of Japan, for a cultural exchange.

Lt. j.g. Natsumi Horie, 34, of Chiba prefecture, said she made personal connections with several American sailors throughout the day.

“I enjoyed walking and visiting places in Kamakura, but the most interesting thing was to share our values — not just as Americans and Japanese, but as people,” she told Stars and Stripes on May 25.

Prior to their tug-of-war, 10 officers and 10 enlisted sailors from each side made a 6-mile hike, toured some of Yokosuka’s caves and watched a military working dog demonstration.

Sailors from both countries also participated in Fleet Week Japan at Naval Air Facility Atsugi, about 25 miles from Yokosuka, and at Sasebo Naval Base on Kyushu island in southern Japan. Sailors ran about 1 ¼ miles at Atsugi and climbed 1,150-foot-high Mount Yumihari near Sasebo.

Along with sailors, Japanese and U.S. civilians were invited to take part in the events, or “Navy Sea Legs Fitness” challenges.

Chief Petty Officer Jaime Romero, 38, of Houston, said he made personal, as well as professional, contacts during Fleet Week this year.