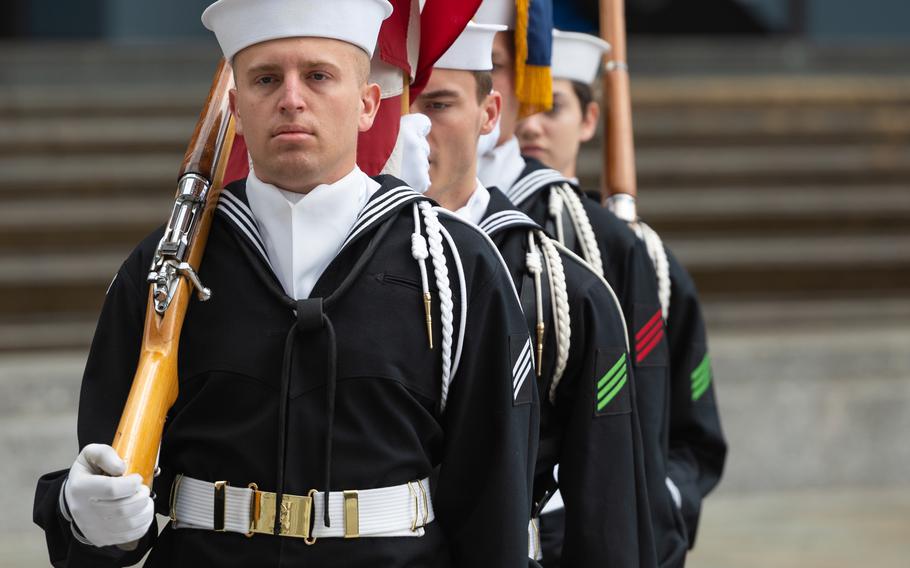 Members of the U.S. Navy Ceremonial Guard prepare to parade the colors at the Blessing of the Fleet ceremony at Navy Memorial in Washington, April 9, 2022 (Griffin Kersting/U.S. Navy)

(Tribune News Service) — The plaza at Washington’s Navy Memorial is granite — meaning it would be easy to hear a clunk if the young sailors of the Ceremonial Guard rehearsing for a wreath laying ceremony didn’t change the way they held their M-1 carbines on the command “Order Arms.”

It’s unlikely anyone in the crowd on Memorial Day, when the wreath-laying will be just one of eight different events for the Ceremonial Guard, would even notice — but during rehearsal, the guardsmen did.

It meant one more tweak to practice. Navy Airman Mark Mahon, who like the rest of the guardsmen is just a few months out of boot camp, knew he’d have to fix something no one outside the guard could see.

He had clapped his right hand on his thigh after the fix bayonet command during rehearsal, as Lt. Rich Greene pointed out.

Normally, the guardsmen’s drill calls for an audible clap on the thigh after they fix the bayonet, but the Navy Memorial Day ceremony, like the Arlington National Cemetery services that make up some 80% of the Ceremonial Guard’s day-in and day-out work, calls for silence.

“It’s just muscle memory,” Mahon said, explaining the unwanted clap. “But we strive for perfection; we aim for excellence.”

Solemn and silent precision does not come easily.

Mahon’s normal task is casket-bearer; he and the six others carry them in perfect, slow-march step. They hold the heavy caskets perfectly level; when they have to turn, they do so in matched small side-steps.

They don’t utter a word. They have to be able to read what each bearer is doing. If a momentary shift of ground or weight means the guardsman next to them or the one on the other side of a casket could stumble, the other bearers have to be able to sense that and respond.

Silently, expressionless, they place a fellow sailor to rest.

“I think about the family, I put myself in the place of the family,” Mahon said. “I can’t show that then, but I feel it afterwards … but I have a couple of people here I can talk to about it.”

The Ceremonial Guard, made up of some of the newest sailors in the Navy, is a stressful assignment, and so counselors and chaplains are on hand.

Cmdr. Dave Tickle, the guard’s commanding officer, like Lt. Greene and Master Chief Paul McCrory, make a point of carefully listening to how the young sailors are doing.

The more experienced guardsmen, like squad leader Marilese Baker, help newer members understand how to handle what Tickle calls the compartmentalization of feeling required for a dignified funeral — sometimes in ways that aren’t as obvious.

A guardsman, for instance, has to be able to stand completely still, sometimes for hours.

“I tell them about the time I felt a bee crawling down my neck, thinking I’m going to be stung, and then I was stung,” Baker said, taking a break from the daily inspection she and other squad leaders conduct for the newest guardsmen.

They check 19 different points, with careful small tugs on sleeves to check that the crease is right, and sharp eyes for stray threads and the distinctive way the guardsmen are supposed to tie their neckerchiefs.

She didn’t flinch then — but she knew, and can tell newer guardsmen it wasn’t how she’d react on her first day on the unit.

Learning to do that “is kind of like meditation,” he said.

The guard’s firing parties, too, aim for precision — though in their case, the result is three volleys of shots from a squad of up to seven sailors with each volley making a single, sharp sound.

The sailors learn a 46-step sequence — each a single movement of hands, feet or gun. Firing the first volley, for instance, begins on step 11 and ends with pulling the trigger on step 13.

There is, of course, no counting out loud.

“It’ll all in your head,” when it is time to perform, said Seaman Gunner Bryant, who with a bit more than a year in the Ceremonial Guard is instructor for the firing party platoon.

That same precision applies for all guardsmen’s other missions, including ceremonies at the White House, rendering honors to visiting heads of state or foreign admirals by firing their old-fashioned, breech-loading cannons, providing color guards for ceremonies around the Military District of Washington and demonstrating their distinctive — and showy — manual of arms.

Since boot camp sailors do not drill with rifles these days, that takes plenty of practice, said Petty Officer 3rd Class Dylan Brandon.

The Ceremonial Guard sailors’ rifles, like their uniforms, with the white belts and dulled daggers, are reminders of the days when sailors, like Marines, formed landing parties for combat missions.

And while much of the work may feel like a far step away from the usual life of a sailor, it really isn’t, said McCrory. He came to the guard after deploying on Norfolk-based USS Dwight D. Eisenhower.

“I do miss going to sea,” he said “I’m a surface warfare officer … But that’s really about talking to sailors, building a team, learning to trust each other.”