“But he never said a word about Korea,” Stevens recalled.

That slight prompted him to launch the Korean War Veterans Association of Western Pennsylvania and a long campaign to raise money for the war memorial on Pittsburgh’s North Shore, dedicated in 1999.

All these years later, the association is dwindling as the Korean War generation fades into history.

Yet they still meet four times a year at a South Hills restaurant, most recently this month; they participate in parades, put out a newsletter and hold a ceremony at the memorial every summer to mark the ceasefire.

Above all, they share a sense of pride for their service in what has been called the Forgotten War.

“We had a cause. We saved the world from communism,” said Chuck Marwood, 91, of Brentwood, a Navy veteran in Korea who helped raise money for the memorial.

The war ended in 1953 in a tense stalemate that remains very much in the news 70 years later. 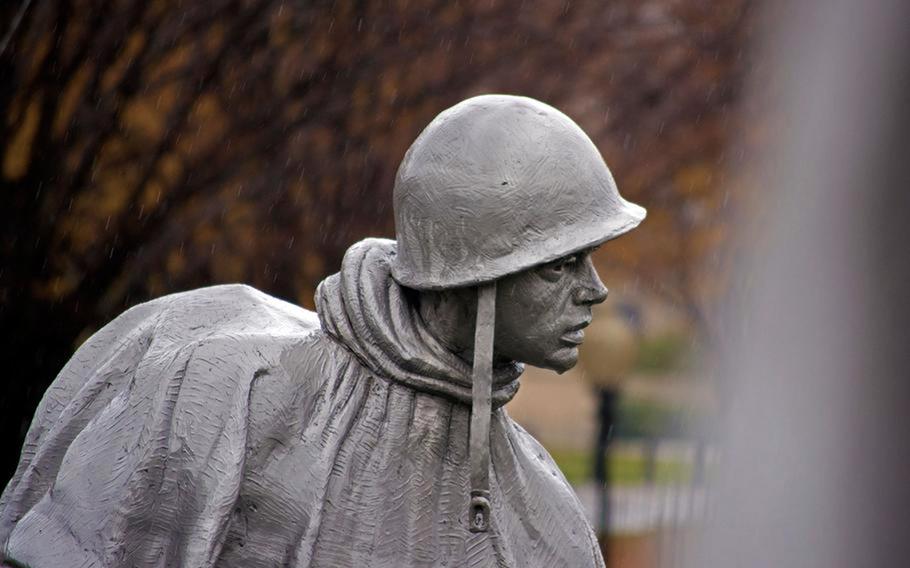 The Korean War Memorial in Washington, D.C., is covered in sleet on Nov. 26, 2014. (Meredith Tibbetts/Stars and Stripes)

The contrast between South and North could not be more stark. For veterans such as Marwood and his friend Jack Rosenberger, president of the KWVA of Western Pennsylvania, the difference is symbolized by photos taken from the international space station showing the two Koreas at night.

“Have you seen that image?” Rosenberger asked. “South Korea is brightly lit but North Korea looks like it has a total of two dim bulbs.”

While North Korea is busy making rockets, Marwood said, South Korea is a thriving democracy that enjoys one of the largest and most diverse economies in the world.

“The South Koreans are so appreciative of the Korean War veterans,” Marwood said. In Pittsburgh, that appreciation had been perhaps best illustrated by the StarKist Co. Owned by Dongwon of South Korea and until recently headquartered on the North Shore, the company held an annual lunch for local Korean War vets to say thank you for what they did.

While South Korea is grateful, many Americans are entirely ignorant about the Korean War. In popular culture, the conflict is overshadowed by the epic campaigns of World War II, the so-called “Good War,” and later by the disastrous American slog in Vietnam.

Korea is forever wedged between the two.

“When I came home there wasn’t much mentioned about the Korean War,” said Marwood. “[Former President Harry] Truman didn’t even call it a war.”

President Truman famously did not seek a declaration of war from Congress and instead referred to the fighting as a “police action.”

To the men on the ground facing waves of Chinese soldiers, often fighting them in brutal hand-to-hand battles, it sure seemed like a war.

Marwood’s own role was very different from that of his Army brethren. After graduating from high school in 1948 he joined the Navy. When the war came he served as an electrician’s mate on the USS Sicily, an escort carrier that supported the Inchon invasion and other campaigns. Marwood was in combat for eight months, came home to get married and went back to serve on an aviation supply ship that serviced the U.S. carriers.

For him, Stevens, an Army vet who saw heavy combat, was the catalyst for recognition in their later years.

When that politician spoke on Memorial Day in 1991, Marwood recalled, “Stevens really went bonkers. That got Ed up off his chair.”

The group has tried to recruit younger vets who have served in Korea in more recent times, but Marwood said they haven’t shown much interest.

The organization is facing its eventual extinction.

For now, the group carries on. A handful of members are still active.

“We still do the Veterans Day parades,” Marwood said. “We don’t have any marchers anymore. We ride in a car.”

The veterans used to clean the North Shore memorial themselves. Now that job is handled by a group of Korean students.

But as always, the vets will be out there on July 27 for the annual ceremony commemorating the signing of the Korean Armistice Agreement in 1953.