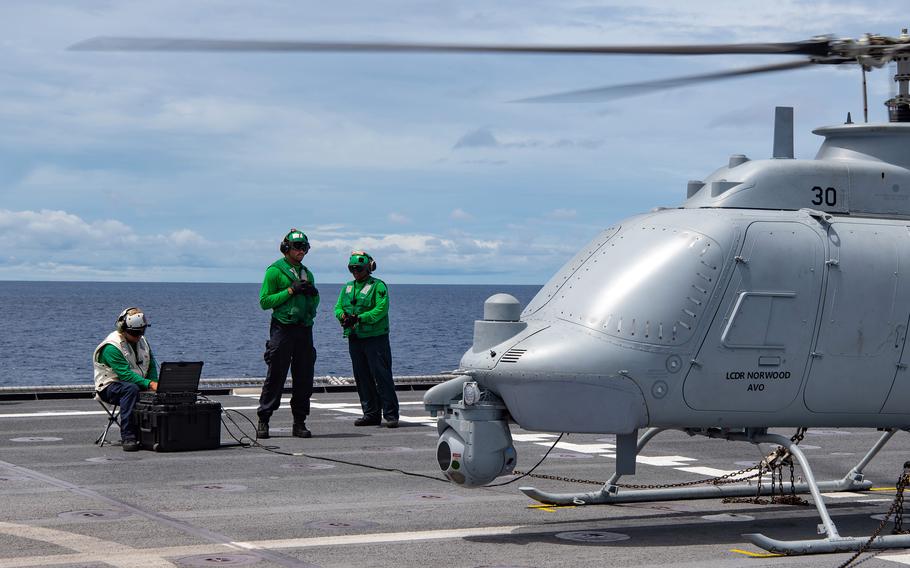 The latest version of an unmanned helicopter system went to work for the first time in the Indo-Pacific aboard a littoral combat ship, the system’s manufacturer announced Monday.

The MQ-8C Fire Scout, an autonomous helicopter with the ability to take off and land on warships capable of carrying aircraft, went to sea aboard the USS Jackson in April, according to manufacturer Northrop Grumman.

The Fire Scout completed operational testing April 20 in the Philippine Sea, U.S. Navy Destroyer Squadron 7 said in a news release that week. The drone subsequently operated in the South China Sea on April 29.

With its combat capabilities proven, the drone is cleared to continue operating on the Jackson and other littoral ships in the region.

The Navy plans to put the Fire Scout on guided-missile frigates and at land-based sites, according to Northrop Grumman. Its other roles will include anti-mine warfare, anti-submarine warfare and logistics and cargo.

The MQ-8C is the newest generation of the Fire Scout, following the MQ-8B, which has deployed aboard guided-missile frigates and littoral combat ships under a Navy contract since 2006, according to Northrop Grumman.

The MQ-8C is a modified Bell 407 helicopter airframe with more speed, endurance and payload capacity than its predecessor, a range of 1,000 nautical miles and more than 10 hours of flight time. The Navy contracted with Northrop Grumman for 10 Fire Scout C models in 2016 for $108.1 million, USNI News reported at the time.

The system was first deployed in December aboard the littoral combat ship USS Milwaukee in the Caribbean Sea, Northrop Grumman announced in January.

The Navy thus far has accepted the delivery of 38 MQ-8C Fire Scout systems with no plans to order more, according to a January report from Nickolas Guertin, head of the Pentagon’s testing office.

While the new model is considered an improvement, it hasn’t gone without issues. The Navy paused MQ-8C operations in 2020 after two mishaps occurred less than a week apart.

On Nov. 10, 2020, an MQ-8C crashed while landing at a Navy base in California. On Nov. 16, another MQ-8C became unresponsive during a test in Maryland. The system aircraft’s rotor blades hit the ground, separating the blades and causing other damage, according to the Naval Safety Center.

In April 2021, an MQ-8B crashed into the side of the littoral combat ship USS Charleston after taking off, damaging a safety net and striking the hull, USNI News reported at the time.

All three incidents were classified as Class A mishaps, which the Navy defines as either involving loss of life or permanent disability, or the complete loss of an aircraft or property damage of $2.5 million or more.

The Navy suspended operations of MQ-8B and MQ-8C systems aboard littoral combat ships deployed in the Indo-Pacific between April 2021 and April 2022, Destroyer Squadron 7 spokesman Lt. j.g. Mohammad Issa told Stars and Stripes in a Tuesday email.