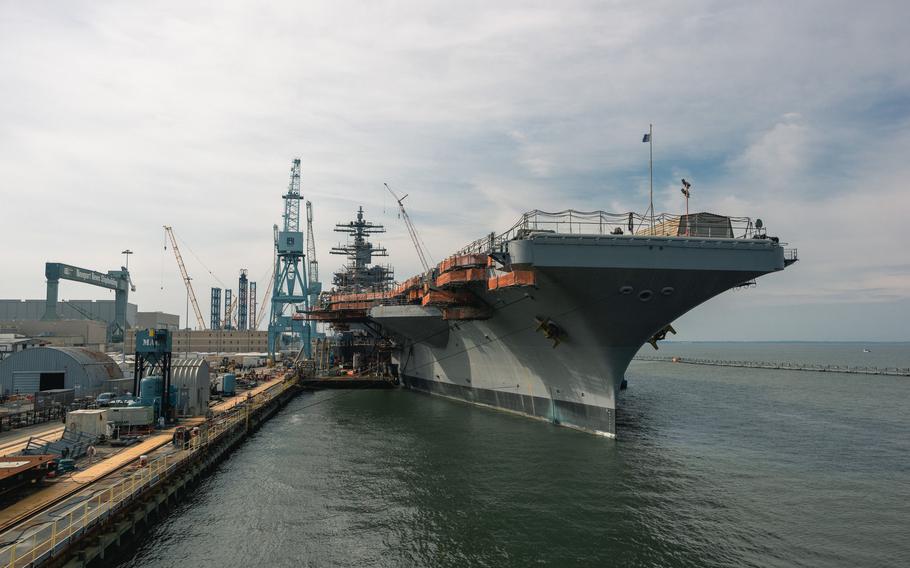 The USS George Washington is in Newport News Shipbuilding for overhaul and refueling. (Matt Hildreth/TNS)

The Navy needs to do more, and do it faster, to support sailors on USS George Washington after a series of suicides while the carrier is undergoing an overhaul and refueling, Rep. Elaine Luria, D-Norfolk, and Rep. Bobby Scott, D-Newport News, said.

“It appears that immediate action is required to ensure the safety and well-being of the ship’s crew,” the two wrote in a letter to Secretary of the Navy Carlos Del Toro and Chief of Naval Operations Michael Gilday.

“There is an urgent need for the Navy to engage with the local community and the shipyard to explore opportunities to improve the quality of life for sailors.”

Luria and Scott said they wanted to know how the Navy is planning to deal with “immediate concerns about command climate, safety, mental health and unsanitary conditions aboard USS George Washington.”

There were three suicides, one of them on the ship, in the space of a week last month, bringing the total for the past two years to six.

The letter calls for the Navy to expand mental health services available to sailors assigned to the Washington, noting that at the moment there are only two additional mental health professionals temporarily assigned to provide services to the crew.

They also asked for funds from the Defense Community Infrastructure Pilot Program to tackle quality of life concerns they heard from sailors during a recent visit to the Washington, including funding to house sailors off the ship, which is a busy industrial worksite, as well as increased mental health services and improved parking.

“We believe that funds from DCIP Program could be leveraged to immediately address the need for additional off ship accommodations such as single sailor housing and improved parking,” Luria and Scott wrote.

The Department of Defense opened access to the DCIP program’s fiscal year 2022 funding earlier this month. The program is intended to address deficiencies in community infrastructure around military installations.

Last year’s grants included $650,000 to Carteret County, N.C., for a $1.95 million dollar shoreline and infrastructure protection project on Joint Expeditionary Base Little Creek-Fort Story’s Radio Island facility and $250,000 to Portsmouth to help cover the cost of $640,000 in transportation improvements for Naval Medical Center Portsmouth. Other grants ranged from runway improvements at a civilian airport next to Fort Riley, Kan., to sewer and wastewater treatment projects at bases in Washington state and California.

The Navy has two investigations underway. One is looking at the three April deaths and the circumstances immediately preceding them. The other seeks answers to more extensive questions about what sailors experience while their ship is in the yard and what sorts of changes might help.

It has offered alternative housing to many of the roughly 400 sailors who are assigned berths on the Washington and is looking for more space for others. None would be required to pay for housing — most of the sailors living on the Washington are fairly new to the Navy and haven’t qualified for the Department of Defense’s Basic Housing Allowance benefit.