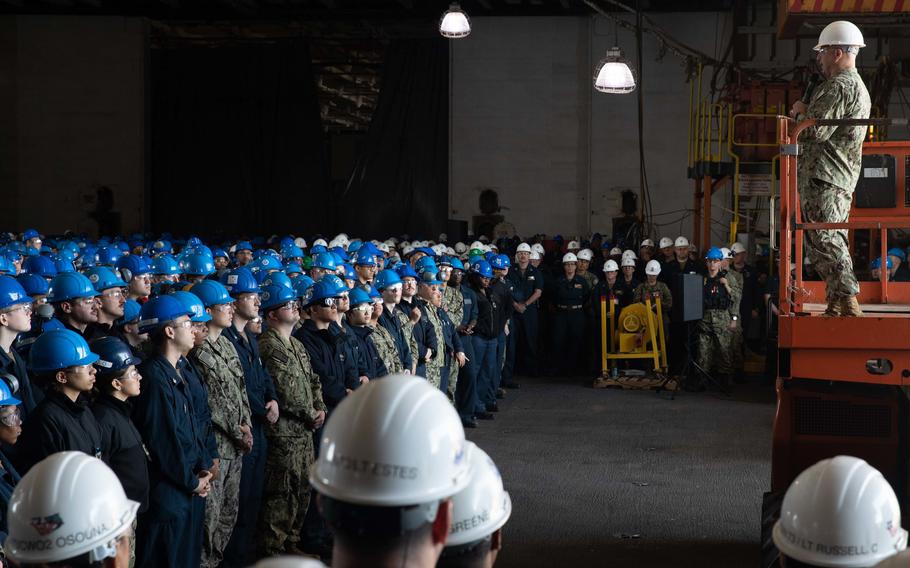 Master Chief Petty Officer of the Navy Russell Smith addresses the crew of the USS George Washington in Newport News, Va., on April 22, 2022. Smith encouraged sailors to get used to the hardships they face while serving aboard a dry-docked ship. (Robert Stamer/U.S. Navy)

The Navy’s top enlisted sailor told the crew of an aircraft carrier that has seen three suicides in the past two weeks to temper expectations of their environment during their prolonged maintenance stay at a Virginia shipyard.

Master Chief Petty Officer of the Navy Russell Smith made the comment Friday in response to a sailor serving aboard the USS George Washington. A transcript of the conversation was released later by the Navy.

“What you're not doing is sleeping in a foxhole like a Marine might be doing. What you are doing is going home at night most nights,” he said. “So when you're here, some of it is that you have some more stability in that you’re here. The downside is some of the s--- that you have to go through logistically will drive you crazy.”

Some sailors say conditions on the ship may be contributing to mental health issues among crew members, according to the transcript.

“Those things include the allocation of our basic allowance for subsistence to ship meals, parking issues, cold water, hot water,” said the sailor, whose name was redacted. “Living standards that aren't necessarily up to par.”

Smith took issue with the “not up to par” characterization but said he understands crew members’ frustration. He added that the sailors should feel able to voice their concerns but “do so with reasonable expectations” and realization of what a refueling and complex overhaul, or RCOH, is like.

It means shutting down water and “some of the other hotel services,” and moving around people who live aboard the ship in order to meet legal and safety requirements, Smith said. 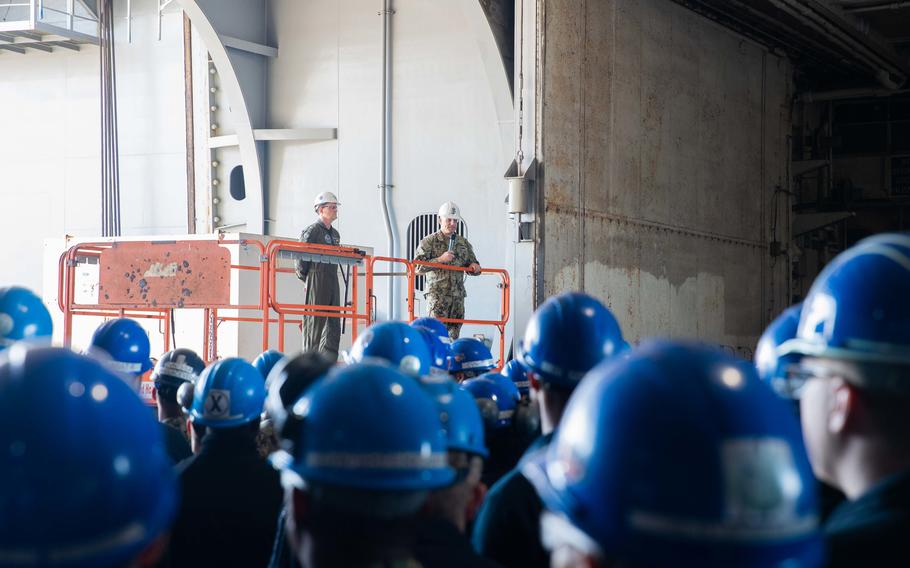 Master Chief Petty Officer of the Navy Russell Smith speaks at an all-hands call aboard the USS George Washington in Newport News, Va., on April 22, 2022. The ship has been in dry dock since 2017, and crew members expressed a range of frustrations to Smith. Three of the ship's sailors took their own lives between April 9 and April 15. (Robert Stamer/U.S. Navy)

The George Washington is nearing the end of a multiyear RCOH at a shipyard in Newport News. The process usually occurs at the midpoint in a carrier’s lifespan, replenishing its nuclear fuels and updating systems.

The ship began the typically four-year process in 2017, but the pandemic and other setbacks caused delays.

Smith’s visit came amid concerns about the well-being of the crew in the aftermath of the suicides of three shipmates. Another sailor death in December 2021 also is being attributed to suicide.

In all, seven sailors assigned to the ship have died within the past year, CNN reported. The Navy is investigating the deaths as well as the command climate and culture of the ship.

It has said that chaplains, psychologists, counselors and leadership are engaged with crew members and available to them.

In answering questions about the availability of mental health professionals, Smith acknowledged shortcomings. He cited his own experience paying out of pocket for counseling because of a six-week wait for an appointment.

The Navy recently hired 133 mental health workers, has staffed chaplains on destroyers and was evaluating other ways to meet the needs of sailors, he said. More work needs to be done, but “we are also each other's counselors,’ he said.

Smith said in a statement, also released Monday, that he takes his responsibility to advocate for personnel seriously and visited the ship to learn about the difficulties sailors are facing. 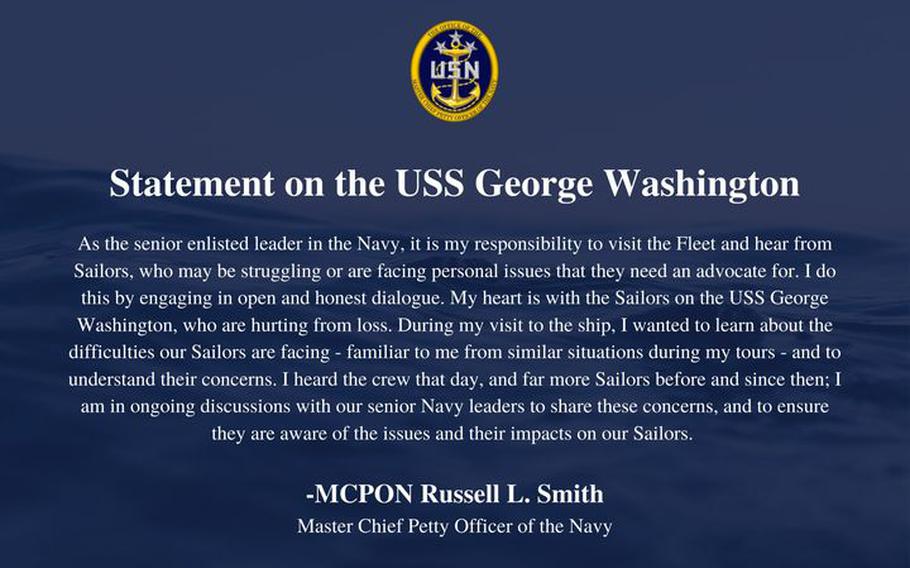 Master Chief Petty Officer of the Navy Russell Smith released an official statement April 25, 2022, after comments he made to the crew of the USS George Washington. The carrier has been in dry dock undergoing maintenance since 2017, and three of its sailors recently died by suicide just days apart. (U.S. Navy)

During the roughly hourlong conversation Friday, Smith fielded questions about several concerns, including COVID-19 restrictions’ potential impacts on mental health; the assignment of inexperienced sailors to a ship in RCOH; and the day-to-day monotony of life in a shipyard with few nearby recreational or entertainment choices.

One sailor wanted to know whether the Navy had considered providing some conveniences, such as additional places where crew members could get internet access or coffee, according to the transcript.

Smith responded by asking the sailor who would buy the land and build coffee shops, internet cafes and restaurants.

But after the sailor clarified that the question pertained to Navy Morale, Welfare and Recreation services, Smith explained that the service has limited resources and competing priorities, according to the transcript.

The answer would have to come in creative strategies, such as food trucks or extended leave, that could improve quality of life, Smith said.

One sailor asked about research into whether vessels in the shipyard could have higher rates of mental health issues and suicides.

Smith said that although he had not seen any studies on that topic, it seemed plausible in his experience.

He acknowledged that serving on a ship during a yearslong maintenance project is likely not what many sailors envisioned when they agreed to serve. But the sacrifices are worth it, he said.

“The defense that you’re giving back to the nation in a ship that’s going to be ready to go for another two decades-plus is more than we could have asked of you,” he said. “And we appreciate that.”