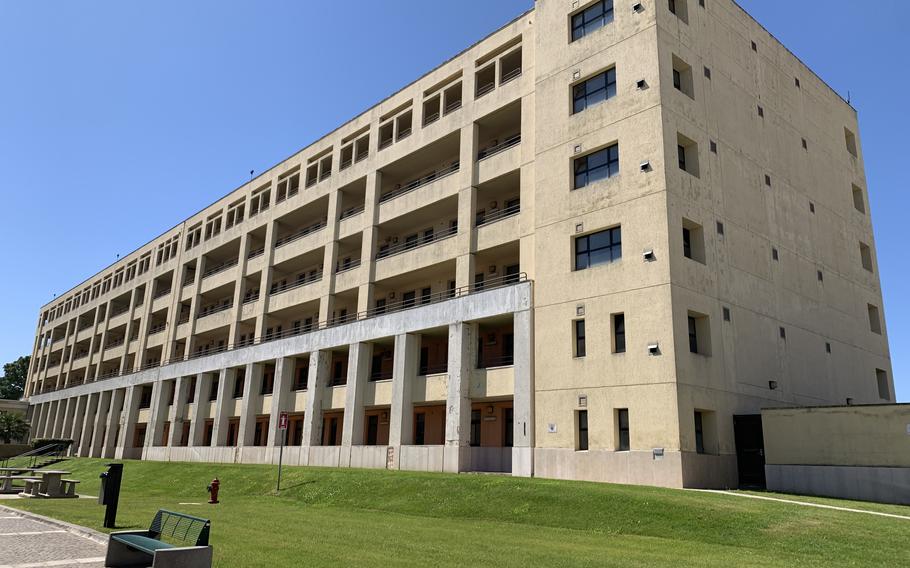 The Navy is proposing to build a new fleet operations facility at its Naples Capodichino site, which is home to U.S. 6th Fleet. Still in the planning stages and unfunded, the new building would be built on the base's southwestern side at the site of a former barracks building seen here on May 19, 2022. (Alison Bath/Stars and Stripes)

NAPLES, Italy — The Navy is planning a four-story operations center at the home of 6th Fleet, which oversees naval forces in Europe and Africa.

The structure at Naval Support Activity Naples is envisioned to have two stories above ground level and two below.

The facility would include offices, conference rooms and administrative areas, said Lisa Woodbury Rama, a spokeswoman for the facilities and engineering command at Navy Region Europe Africa Central.

It would be built in the space occupied by a former barracks on the southwest side of the base’s Capodichino site, Woodbury Rama said.

“The project may be submitted for next fiscal year funding based on the progress of the design phase,” she said.

A timeline and planning considerations still are in development, said Cmdr. Richlyn Ivey, a spokeswoman for U.S. Naval Forces Europe-Africa.

Fleet officials did not discuss specifics, but Ivey said the project would “support the future operational requirements of U.S. Naval Forces Europe-Africa.”

Planning for the facility is happening amid a Navy proposal to decommission 6th Fleet flagship USS Mount Whitney in 2026, according to the service’s 2023 budget documents.

That would save $179.7 million, and the functions of Mount Whitney could be handled by ashore staff, the Navy said.

Mount Whitney also serves as the command ship for Naval Striking and Support Forces NATO. It has sailed multiple times in the Black Sea as a symbol of NATO strength and overseen dozens of naval exercises.

Mount Whitney, one of only two Blue Ridge-class amphibious command-and-control ships in the Navy, was deployed last month to the Middle East-based U.S. 5th Fleet as part of Combined Task Force 153.

Replacing the ship’s political presence will be challenging, Sebastian Bruns, a Fulbright scholar in residence at the U.S. Naval Academy and maritime expert at the Center for Strategic and International Studies, said last month.

The Mount Whitney offers the deck space needed to host diplomatic receptions during international exercises, he said, adding that the only alternative in that regard is a San Antonio-class landing platform dock ship.