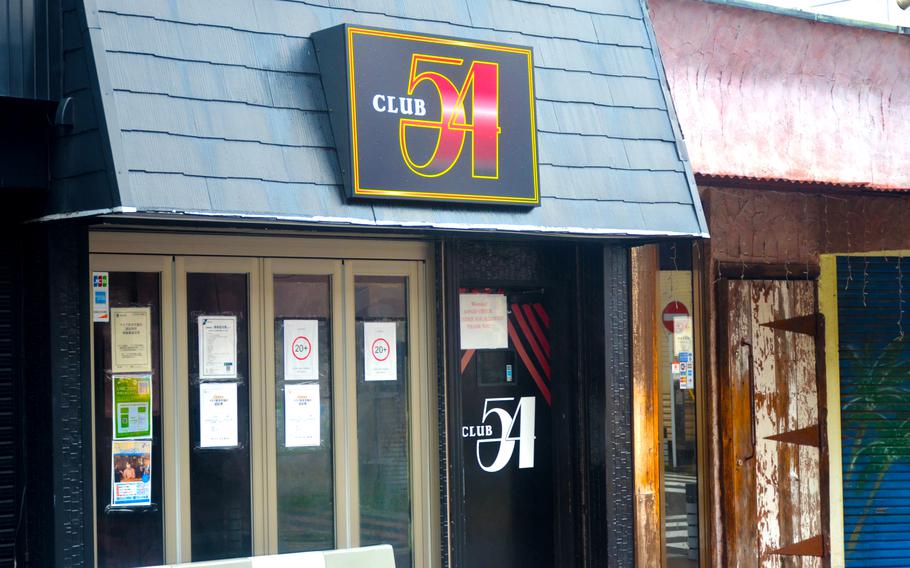 Club 54, a bar not far from the main gate of Yokosuka Naval Base, Japan, was placed off-limits to uniformed troops for at least 90 days, Friday, May 13, 2022. (Alex Wilson/Stars and Stripes)

YOKOSUKA NAVAL BASE, Japan – The installation commander at the home of the U.S. 7th Fleet has placed a local nightclub off-limits due to “reports and evidence of illicit activity.”

Sailors and other uniformed service members will be barred from patronizing Club 54 in Yokosuka’s Honcho district for at least 90 days, the command announced Friday afternoon on its official Facebook page.

“Illicit activity violates Navy regulations and presents conditions that are detrimental to the safety and security of members of the U.S. Armed Forces,” base spokesman Randall Baucom told Stars and Stripes in an email Friday.

Club 54, which frequently draws large crowds on weekends, had been flagged for issues in the past and received a written notice in November, Baucom said.

While he wouldn’t specify the reasons for the ban, Baucom said “illicit activity” could include serving alcohol to underage individuals, locking doors after curfew to prevent shore-patrol checks or hiding service members after curfew.

Active-duty U.S. military personnel are prohibited from consuming alcohol in public off base between midnight and 5 a.m., according to the U.S. Forces Japan liberty order.

The ban on Club 54 is limited to uniformed personnel only, but Baucom said civilians and contractors affiliated with the base are also encouraged to avoid the establishment.

A representative for Club 54 declined to comment on the ban when reached via Facebook Messenger on Friday afternoon. The unidentified individual said the bar had not yet been contacted by the base and was unaware of the specifics.

Baucom said businesses that are placed off-limits are given the opportunity to represent themselves at quarterly Armed Forces Disciplinary Control Board meetings, which review establishments that have received complaints or appear to have “conditions that are detrimental to the safety and security” of service members.

“If a business is placed off-limits, they are given an opportunity to reappear before the board and discuss how they have addressed the concerns of the command, at which time the board could recommend to the commander to remove them from the list,” Baucom said.

Baucom declined to say whether the ban was related to a video that surfaced on May 6 showing five men fighting as uniformed sailors, likely shore patrol members, looked on. The brawl, which is under investigation by base security’s Criminal Investigations Division, happened across the street from Club 54.

The club joins five other establishments deemed off-limits to service members in the region. That list includes Mona’s Bar and Bar 894 in Yokosuka and The Night Club, Empire Lounge Bar and Vibrations Bar in Tokyo.