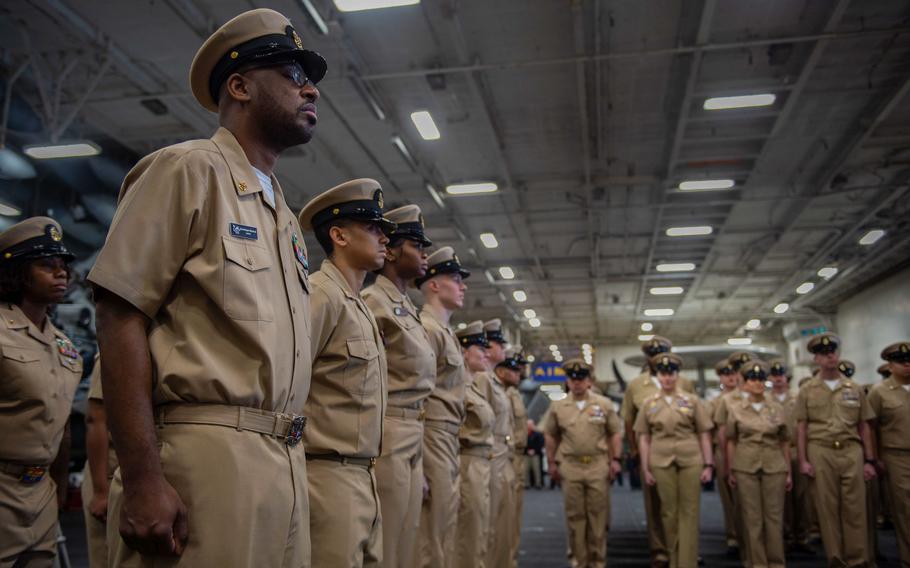 (Tribune News Service) — When USS Harry S. Truman took on supplies and fuels this week in the Adriatic Sea, it was up to its chief petty officers, such as Senior Chief Brian Epling, to organize the nerve-racking work on the hangar deck.

It meant catching and securing lines sent flying over from USNS Supply as it and Truman steamed along side by side, just yards apart, and then safely unloading the supplies swinging over along those lines.

“When ships pull into a port, it is the chiefs who orchestrate working parties and carry out the plan of the day to ensure the smooth operational tempo,” said Senior Chief James Colley, recalling last week’s port call at Souda Bay as he reflects on the Navy’s annual “Chief Week” celebration and the role of chief petty officers on deployment.

For the port call at Souda, Truman’s chiefs organized the line handlers — sailors who can throw a ball attached to a light rope hard and accurately enough so that others on a pier can haul over the heavy hawsers that hold a 100,000 ton carrier in place.

At the end of a port visit, the chiefs make sure sailors are stowing those hawsers just as the chiefs had trained them, to make sure there are no hitches the next time the ship needs to moor.

Before arriving at Souda, the chiefs organized work parties to load stores, connect to shore-based water and power, assign deck-watches and security watches.

“Ships, aircraft and weapons systems do not operate themselves,” Colley said.

“It’s the Navy’s sailors who fascinate me. Mentoring junior sailors to become resilient young men and women is what it’s all about, teaching sailors to hone their craft and to take pride in ownership.”

Being on deployment with Truman during the Navy’s celebration of “Chief Week,” was a chance for Chief Petty Officer Rafael Martie to reflect on what the job really entails.

“I interact with my sailors daily,” he said.

But not just with his team.

“You are everyone’s chief. On a ship on deployment at any moment a sailor can come up to you and ask you a question he needs answered ... We will stop on a dime and assist that sailor be it a sailor from my department, repair locker or any sailor on the ship.”

“It’s about being able to ask anyone how they are doing, and show them they are not in this by themselves.” Chief Petty Officer Gregory L. Daniel, charge of all the new sailors who inspect, wash, launch and recover helicopters.

That’s to establish the credibility that ensures sailors listen when they need to, he said.

And credibility flows up the ladder, too.

“Senior and junior officers alike really do listen to a chief’s advice,” Martie said. ”It is common for chief to brief XOs, COs and divisional officers.”

It’s demanding work, and Truman chiefs are typically the last in their department to hit their racks at the end of the day.

“I love watching our sailors work on the aircraft, and knowing that all of their hard work has an impact on world events.”

Truman has had a high profile impact on those events since deploying from Norfolk in December: Its air wing has been flying air policing missions to bolster NATO’s eastern flank as Russia threatened, then invaded Ukraine.

“We set out to prove that this dynamic employment of an aircraft carrier — in pretty restrictive waters — could be done, and in doing so, we have demonstrated the enduring U.S. commitment to allies,” said Rear Adm. Curt Renshaw, commander of the Truman carrier strike group.

Carriers usually operate in miles and miles of open water, so working in the Aegean and Adriatic — dotted with islands and largely within nations’ territorial waters — posed bigger-than-usual demands on Epling’s team of helmsmen and lookouts.

“Being a chief means that I am here to set the standard and uphold it,” said Chief Petty Officer Timothy Dabbelt.