Dozens of sailors reenlist together aboard USS Harry S. Truman in Mediterranean 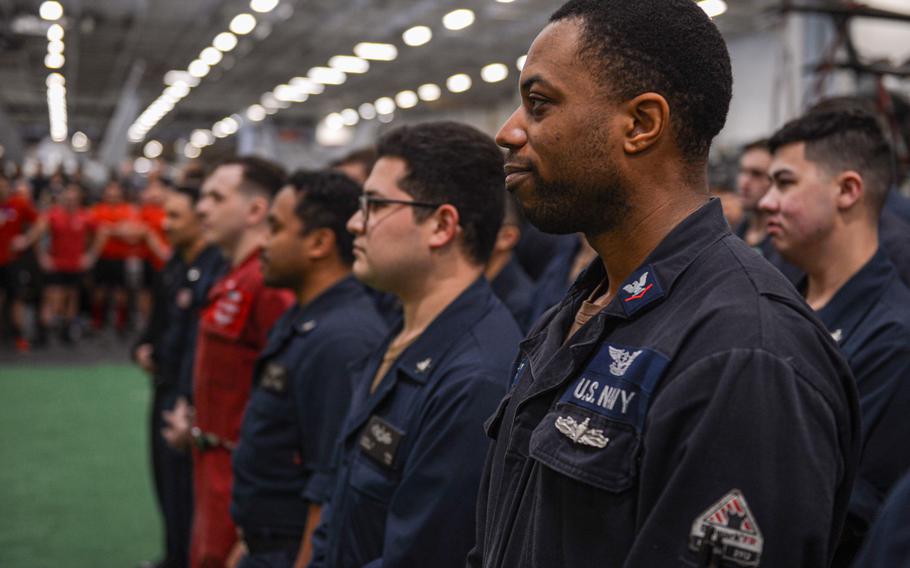 Damage Controlman 3rd Class Tyler Dance, from Inglewood, Calif., stands at ease during a re-enlistment ceremony in the hangar bay of the Nimitz-class aircraft carrier USS Harry S. Truman, Feb. 27, 2022. The Harry S. Truman Carrier Strike Group is on a scheduled deployment in the U.S. Sixth Fleet area of operations in support of U.S., allied and partner interests in Europe and Africa. (Jack Hoppe/U.S. Navy)

(Tribune News Service) — Months into their deployment in the tense waters of the Mediterranean, dozens of USS Harry S. Truman’s sailors have reenlisted — and decided they wanted to take the oath together.

It’s not the usual way to sign up for another hitch, and the decision isn’t always the easiest.

“Taking the oath with so many other shipmates was a relieving feeling because you are there with so many others in so many different situations that are choosing to make that hard decision and stay in with you and fight by your side,” said Petty Officer 2nd Class Daniel G. Dziewit, whose job is to make sure the radar, avionics and electronic systems on Truman’s aircraft work properly as the air wing flies its policing missions on NATO’s eastern flank.

“Being deployed really did make me contemplate reenlisting,” he said. “Reenlisting was both an easy and a hard decision. Easy for the fact of the job security and the benefits for myself and my family. Hard for the fact that my fiancee and I are no longer deploying together and have a 9-month old boy at home, so reenlisting means that I have to spend long periods of time away from them.”

At sea, it is harder to discuss future plans with family — especially now, watching the war in Ukraine.

“Our families just want us to stay safe but this is a time of unknowing and sitting on a razor’s edge waiting for the scales to turn one way or another worries them a lot and can cause major discussions for reenlistments,” he said.

But he tries to tell family, friends and neighbors back in Hampton Roads not to worry.

Taking the oath with so many others on the hangar deck of the Truman reinforced a sense of comradeship, said Petty Officer 1st Class Caleb Goulet.

“We’re all out here supporting each other and this was another way that we were able to come together and do something that is so important in each sailor’s career, it reenforces our personal decisions on why we choose to continue to serve,” he said.

Goulet said he was already planning to reenlist.

“But the situation with Ukraine and Russia reaffirmed why I want to serve and continue serving,” he said. “I want to be in a position where I can help others and defend those who can’t defend themselves from tyranny and injustice.”

This is his third deployment on Truman “and it’s had its ups and downs, there are a lot of stressors, like the Russian invasion of Ukraine and not knowing what part we might play in that, but overall the deployment has been going pretty smoothly,” he said.

“While it was slightly embarrassing to be in front of that many people, it did make the occasion more lighthearted, especially compared to your original oath,” said Petty Officer 3rd Class Anthony Best, a machinist’s mate who works as an engineering lab technician.

“I will hit my four-year mark in the Navy this November and I definitely gave it a whole lot of thought,” said Petty Officer 2nd Class Travis Odom.

“Honestly, I think I’m the last one on the totem pole to reenlist. Everyone else has quite a few years or determined just to get out — the Navy’s not for everybody.”

He’s a machinery repairman, responsible for making parts for everything from the Truman’s pumps and winches to its main propulsion systems.

While he could be getting out in November, “I’ve made it this far,” rising to petty officer 2nd class in 3 1/2 years.

“I just want to keep it rolling,” he said. “I’ve done well this far, I’d like to see what the possibilities are that I can do later on.”

For Capt. Gavin Duff, Truman’s commanding officer, the mass ceremony was a time for gratitude about shipmates who decided to stay with the Navy.

“Commanding officers get to do a lot of cool things but this — reenlisting 87 sailors — is humbling,” he said.

“The sailors raising their right hand on the deck of a deployed CVN (nuclear aircraft carrier) and swearing to continue support and defend the Constitution will remember this moment for the rest of their life and so will I.”