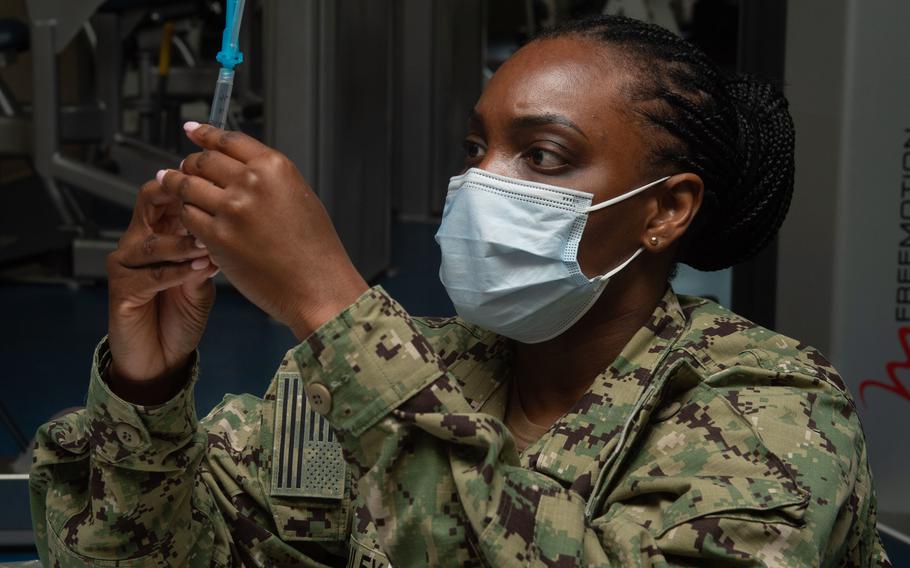 WASHINGTON — The Navy has ousted its first group of sailors for refusing the coronavirus vaccine, the service announced late Wednesday.

Twenty sailors who had just started their military careers were booted from the service through what’s known as entry-level separations, the Navy said. These sailors were separated within their first 180 days of active-duty service during their initial training period.

No other separations have been issued, but those with longer tenures could face the same fate in the coming months if they continue to refuse the vaccine, the Navy said.

Navy commanders were ordered Dec. 15 to begin the separation process for sailors who have refused to take the coronavirus vaccine. As of Wednesday, 5,268 active-duty and 2,980 Reserve sailors remained unvaccinated.

Most separations will happen in the first six months of 2022, though some could continue past June 1, Rear Adm. James Waters, the Navy’s director of military personnel plans and policy, said last month.

So far, the service has received 3,009 active-duty religious accommodation requests.

The Navy Reserve has also issued nine temporary medical and 31 administrative exemptions. No Reserve sailors have been approved for permanent medical or religious exemptions.

The lack of religious exemptions is not unique to the Navy. None of the five military branches have issued vaccine exemptions for religious reasons.

However, a federal judge in Texas on Monday granted a preliminary injunction stopping the Pentagon from firing 35 Navy special operators who sued over their religious objections to the vaccine mandate. In issuing the injunction, U.S. District Judge Reed O’Connor said the “loss of religious liberties outweighs any forthcoming harm to the Navy.”

Since the start of the pandemic, 57,396 sailors have contracted the coronavirus — 17 of whom died, according to the Navy. Currently, 5,908 sailors are positive for the virus and one is hospitalized.

A coronavirus outbreak briefly delayed the littoral combat ship USS Milwaukee’s departure from a port visit to Naval Base Guantanamo Bay on Dec. 24. All crew members were fully vaccinated and the ship returned to sea Monday.

Before vaccines were available, an outbreak on the USS Theodore Roosevelt in March 2020 sidelined the aircraft carrier in Guam for about three months before it was under control and ready to return to sea.