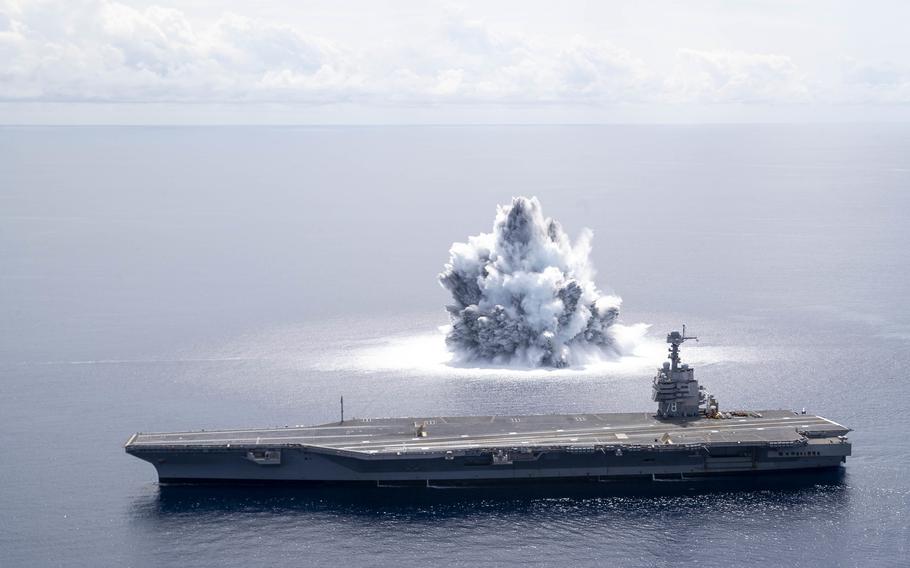 (Tribune News Service) — The last of USS Gerald R. Ford’s 11 weapons elevators, one of four major new technologies on the Navy’s newest carrier, has been formally delivered — some 11 years after the original due date.

The elevators can lift more weight — up to 24,000 pounds — than those on other carriers. Their design also allows significantly safer operation.

But formal delivery meant verifying how each of the elevators fit in their different spaces on the Ford, a challenging task since they don’t work properly if critical parts are knocked out of place. The tolerances for that are less than one-sixteenth of an inch.

Those validations only came after testing and repeated re-testing, in port and while the carrier was at sea earlier this year.

“This is a significant milestone for the Navy, ship, and her crew,” said Rear Adm. James P. Downey, program executive officer for aircraft carriers. “With completion of this final AWE (advanced weapons elevator), we now have the entire system to operate and train with.”

Because the elevators can lift more weight, they allow the Ford to stock a wider range of weapons for its air wing.

They’re arranged differently, too. Elevators on the Navy’s other carriers lift ordnance from magazines deep in the hull directly to the flight deck, which is where ordnance sailors often must do final assembly and arming.

The Ford’s elevators are set up to deliver weapons in two stages, from the magazine to an assembly and arming stage inside the hull and away from the busy flight deck, and then from there to the flight deck to be attached to aircraft.

The elevators move on steel rails, powered by travelling “stators” — the electromagnets at the heart of electric motors — or by a backup system of motors on the platform itself.

The rails, stators and backup platform motors replace the hydraulic systems used in other weapons elevators and mean there’s no leaking oil or hydraulic fluid around to create a fire hazard while handling explosives.

On the flight deck, meanwhile, the elevators’ hatches are in two parts, which means that when open, they don’t reach as high. That makes it easier for airplanes to move around the flight deck, and cuts down blind spots for sailors who must always keep a sharp eye out for planes in motion.

Sailors and hundreds of craftsmen, technicians and engineers from Newport News Shipbuilding worked around the clock, through several holidays and underway periods to bring the elevators on line, Downey said.

The Ford is now back at the yard for a final check-up before launching into the training required for deployment. It will come out of the yard on schedule in the spring, Downey said.